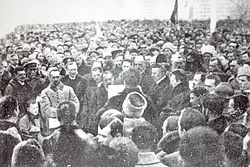 The signing of the Act Zluky, on the St. Sophia Square in Kiev

The Unification Act (Ukrainian: Акт Злуки, Act Zluky) was an agreement signed on January 22, 1919 by the Ukrainian People's Republic and the West Ukrainian People's Republic on the St. Sophia Square in Kiev. Since 1999 the Day of Unity of Ukraine, celebrated every year on 22 January to mark the signing of the treaty, is a state holiday;[1][2] it is not a public holiday.[3] 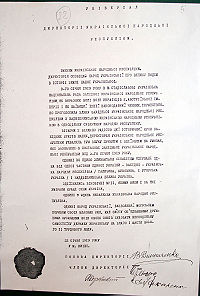 The agreement was aimed at creating a unified Ukrainian state, a movement long awaited by the intelligentsia on both sides.[4] However, the Act Zluky was regarded as purely symbolic in that both governments still retained their own separate armies, administrations and government structure.[4]

The text of the universal made by the Directorate of the Ukrainian People's Republic:

The territory of Ukraine, divided over the centuries, including Galicia, Bukovyna, Carpathian Ruthenia, and Dnieper Ukraine will now become a great united Ukraine. Dreams, for which the best sons of Ukraine fought and died for, have come true.

According to the treaty Galicia would become an autonomous part of Ukraine.[5]

File:Human chain in Ukraine.jpg
Over 300,000 Ukrainians participated in the human chain on January 21, 1990.

To mark the 71st anniversary of the signing of the Act Zluky in 1990, over 300,000 Ukrainians[7] created a human chain (approx. 482 km (300 mi))[7] from the capital Kiev to the western Ukrainian city of Lviv on January 21, 1990.[8][9][10] The chain, the largest public demonstration in Ukraine since the beginning of Glasnost,[7] was funded by the People's Movement of Ukraine (Rukh) and was partly inspired by the Baltic Way which had taken place the previous year.[7] Also, for the first time since the period of the Ukrainian People's Republic, the blue and yellow national flag was raised.[11]

Day of Unity of Ukraine

On January 21, 1999, the President of Ukraine Leonid Kuchma decreed the "Day of Reunion of Ukraine" (Ukrainian: День Соборностi України, Den’ Sobornosti Ukrayiny), a government holiday, celebrated every year on January 22[12] to mark the political and historical significance of the 1919 agreement.[1] It is not a public holiday.[3] In December 2011, President Viktor Yanukovych caused public controversy when he merged the "Day of Freedom" into this day,[10][13][14] naming it officially the "Day of Unity and Freedom of Ukraine" (Ukrainian: День Соборності та Свободи України, Den’ Sobornosti ta Svobody Ukrayiny).[15] The "Day of Freedom" was created in 2005 by President Viktor Yushchenko, Yanukovych's opponent, to be celebrated on 22 November in commemoration of the Orange Revolution.[16] President Yanukovych stated he changed the day of celebration because of "numerous appeals from the public".[13] Mid-October 2014 President Petro Poroshenko undid Yanukovych's merging when he decreed that 21 November will be celebrated as "Day of Dignity and Freedom" in honour of the Euromaidan-protests that started on 21 November 2013.[17]