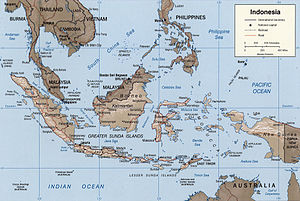 Act of Free Choice (Indonesian: Penentuan Pendapat Rakyat, PEPERA) was a series of eight regional assemblies from July to August 1969 by which Indonesia asserts that the Western New Guinea population decided to relinquish their sovereignty in favor of Indonesian citizenship. The Act of Free Choice was a vote by 1,025 men and women selected by the Indonesian military in Western New Guinea, who were asked to vote by raising their hands or reading from prepared scripts in a display for United Nations observers. The event was noted by the United Nations in General Assembly resolution 2504 (XXIV) without qualification whether it complied with the authorizing New York Agreement, and without qualification whether it was an act of "self-determination" as referred to and described in United Nations General Assembly resolutions 1514 and 1541 (XV) respectively.

The referendum and its conduct had been specified in the New York Agreement; Article 17 of which in part says:

The agreement continues with Article 18:

Article XVIII
Indonesia will make arrangements, with the assistance and participation of the United Nations Representative and his staff, to give the people of the territory, the opportunity to exercise freedom of choice. Such arrangements will include:

a. Consultation (musyawarah) with the representative councils on procedures and methods to be followed for ascertaining the freely expressed will of the population.

b. The determination of the actual date of the exercise of free choice within the period established by the present Agreement.

d. The eligibility of all adults, male and female, not foreign nationals to participate in the act of self-determination to be carried out in accordance with international practice, who are resident at the time of the signing of the present Agreement, including those residents who departed after 1945 and who returned to the territory to resume residence after the termination of the Netherlands administration.

Under Article 17 of the New York Agreement, the plebiscite was not to occur until one year after the arrival of U.N. representative Fernando Ortiz-Sanz (the Bolivian ambassador to the United Nations) in the territory on 22 August 1968. However, after NASA announced the Apollo 11 flight schedule to land on the Moon for July, Indonesia proposed the plebiscite be conducted six weeks early during July 1969.[citation needed]

The New York Agreement specified that all men and women in Papua that were not foreign nationals had the right to vote in the Act. General Sarwo Edhi Wibowo instead selected 1025 Melanesian men and women out of an estimated population of 800,000 as the Western New Guinea representatives for the vote. They voted publicly and unanimously in favor of Indonesian control. The United Nations took note of the results with General Assembly Resolution 2504. According to Hugh Lunn, a journalist from Reuters, men who were selected for the vote were blackmailed into voting against independence with threats of violence against their persons.[1] Contemporary diplomatic cables showed American diplomats suspecting that Indonesia could not have won a fair vote, and also suspecting that the vote was not implemented freely, but the diplomats saw the event as a "foregone conclusion" and "marginal to U.S. interests".[2] Ortiz-Sanz wrote in his report that "an act of free choice has taken place in accordance with Indonesian practice,” but not not confirming that it was in accordance with international practice as the Act of Free Choice had required. [29 Id. At 44-45. 30 BUDIARDJO & LIONG, WEST PAPUA, supra note 10, at 24-26. See also OSBORNE, INDONESIA’S SECRET WAR, supra note 4, at 46-48.]

Demands for a revote

The "Act of free choice" has often been criticized as the "Act of no choice",[citation needed] and many independence activists continuously protest for a fresh referendum for every single Papuan. After the Fall of Suharto in 1998, celebrity Archbishop Desmond Tutu and some American and European parliamentarians requested United Nations Secretary Kofi Annan to review the United Nations' role in the vote and the validity of the Act of Free Choice.[2] There have been calls for the United Nations to conduct its own referendum, with as broad an electorate as critics say the New York Agreement obliged but the Act of Free Choice did not fulfill. Those calling for a vote also point to the 30 year license which Indonesia sold to the Freeport-McMoRan company for Papuan mining rights in 1967, and to the Indonesian military's response to the East Timor referendum as support to discredit the 1969 Act of Free Choice.[original research?] The Indonesian Government position is that the United Nations' noting of the results validates the conduct and results.[3]

A new referendum is supported by many international organisations including the Free West Papua Campaign[4] which works with West Papuans to provide all West Papuans with self-determination and full independence from Indonesian rule.

The Federal Republic of West Papua, formed on 19 October 2011 at the Third West Papuan People's Congress, has declared the New York Agreement and The Act of Free Choice null and invalid, and seeks recognition by the United Nations as an independent nation according to international and customary law.