Action française (French pronunciation: ​[aksjɔ̃ fʁɑ̃sɛz], AF; English: French Action) is a French far right political movement. The name was also given to a journal associated with the movement.

The movement and the journal were founded by Maurice Pujo and Henri Vaugeois in 1899, as a nationalist reaction against the intervention of left-wing intellectuals on the behalf of Alfred Dreyfus. Charles Maurras quickly joined Action française and became its principal ideologist. Under the influence of Maurras, Action française became monarchist, counter-revolutionary (objecting to the legacy of the French Revolution) and anti-democratic, and supported Integralism and Catholicism.

Shortly after it was created, Action française tried to influence public opinion by turning its journal to a daily newspaper and by setting up various organizations. By 1914, it had become the best structured and the most vital nationalist movement in France. In the inter-war period, the movement enjoyed prestige and influence, but its popularity gradually declined as a result of the rise of fascism and of a rupture in the relations with the Catholic Church. During the Second World War, Action française supported the Vichy Regime and Marshal Philippe Pétain. After the fall of Vichy, its newspaper was banned and Maurras was sentenced to life imprisonment. The movement nevertheless continued to exist due to new publications and political movements. Although Action française is not a major force in the right as it used to be, its ideas have remained influential.

The ideology of Action française was dominated by the thought of Charles Maurras, following his adherence and his conversion of the movement's founders to monarchism. The movement supported a restoration of the monarchy and, after the 1905 law on the separation of Church and State, the restoration of Roman Catholicism as the state religion, even though Maurras was an agnostic himself. It should not be considered that the movement intended to restore real power to the king, merely to set him up as a rallying point in distinction to the Third Republic of France which was considered corrupt and unworkable by many of its opponents, whom they hoped to come to their banner.

The movement advocated decentralization (a "federal monarchy"), with the restoration of pre-Revolutionary liberties to the ancient provinces of France (replaced during the Revolution by the departmental system). It aimed to achieve a restoration by means of a coup d'état, probably involving a transitional authoritarian government.

Action française was not focused on denouncing one social or political group as the conspiratorial source of ills befalling France. Different groups of the French far right had especial animus against either the Jews, Huguenots (French Protestants), or Freemasons. To these Maurras added unspecific foreigners residing in France, who had been outside French law under the ancien regime, and to whom he invented a slur name derived from ancient Greek history: métèques. These four groups of "internal foreigners" Maurras called les quatre états confédérés and were all considered to be part of "Anti-France". Of course he was also opposed to socialism, and, after the 1917 October Revolution, to communists, but antagonism against them did not have to be constructed or marshalled (although the Protestants and the Freemasons were traditional supporters of the Republic, pejoratively called la gueuse (the slut) by the AF, and were thus in general left-wing).

In 1899, Maurice Pujo and Henri Vaugeois left the nationalist mouvement Ligue de la Patrie française and established a new movement, called Action française, and a new journal, Revue de l'Action française. This was their nationalist reaction against the intervention of left-wing intellectuals on the behalf of Alfred Dreyfus.[1]

Charles Maurras quickly joined Action française and became its principal ideologist. Under the influence of Maurras, Action française became monarchist, counter-revolutionary (objecting to the legacy of the French Revolution) and anti-democratic, and supported integralism and Catholicism. The Dreyfus affair gave some Catholics the impression that Catholicism is not compatible with democracy. Therefore, they regarded Action française as rampart of religion and the most fitting expression of the church doctrine regarding society.[1] 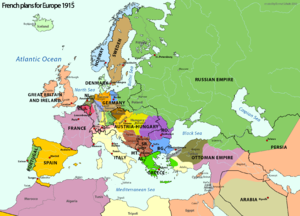 Ideas of post-WW I-Europe by French extremists, published in Paris 1915

During the First World War, Action française supported the prime minister Georges Clemenceau and the will to defeat the Germans. France's victory in the war, and the movement's anti-German intransigence on the peace terms resulted in a peak of success, prestige and influence in the inter-war period. For example, in 1917 it moved into new spacious offices on the rue Caumartin, near St. Lazare train station.[2]

Action française exploited the disquiet aroused on the right by the victory of the left-wing coalition in 1924 (Cartel des gauches) and the horror of communism, sending about thirty candidates to the French parliament.[1][2] Well-known writers endorsed the movement, which advertised itself as the thinking man's party. Literary reviews, especially Revue universelle, spread the message of Action française. The polemics of the review, its personal attacks on leaders, and its systematic exploitation of scandals and crises helped detach some of the intellectuals from their allegiance to the republic and democracy. This agitation culminated in the 6 February 1934 crisis.

The successes shaped the ideology of Action française. It became more integrated into mainstream conservatism, stressing patriotism and Catholicism as opposed to monarchism.

In spite of the movement's support for Roman Catholicism as a state religion and the fact that the vast majority of its members were practising Catholics (indeed, they included significant numbers of clergy), some Catholics regarded it with distrust.

Much of this was due to the influence of Maurras, an agnostic whose advocacy of Catholicism was due to his belief that it was a factor of social cohesion and stability and to its importance in French history. This rather utilitarian view of religion disturbed people who were often in agreement with many of his ideas. Its influence on young Catholics was also considered problematic. Thus, on 29 December 1926, Pope Pius XI condemned Action française.

Several of Maurras's writings, including the newspaper were placed on the Index Librorum Prohibitorum at the same time, on 9 January 1927, with Action française being the first newspaper ever placed on the Roman Catholic Church's list of banned books.[3] This was a devastating blow to the movement. On 8 March 1927 AF members were prohibited from receiving the sacraments. Many of its members left (two Catholics who were forced to look for a different path in politics and life were writers François Mauriac and Georges Bernanos); and it entered a period of decline.

In 1939, following the Spanish Civil War and a revival of anti-communism in the Catholic Church, Pope Pius XII decided to end the condemnation. Thereafter, Action française claimed that the condemnation had been declared for political purposes.

Despite the 1926 Papal condemnation, Action française remained popular during the interwar period, being one of the most important far right leagues, along with the Croix-de-Feu and others. As increasing numbers of people in France (as in Europe as a whole) turned to authoritarian political movements, many turned to Action française. It thus continued to recruit members from the new generations, such as Robert Brasillach (who would become an infamous collaborationist), Thierry Maulnier, Lucien Rebatet, etc. It was marginally represented for a time in the Chamber of Deputies, notably by Léon Daudet, elected in the right-wing Chambre bleue horizon (1919–1924).

However, with the rise of fascism and the creation of seemingly fascist leagues, added to the 1926 Papal condemnation, the royalist movement was weakened by various dissidents: Georges Valois would create the fascist Faisceau, Louis Dimier would break away, while other members (Eugène Deloncle, Gabriel Jeantet, etc.) created the terrorist La Cagoule group.

Action française spearheaded the 6 February 1934 crisis, which led to the fall of the second Cartel des gauches and to the replacement of Radical Édouard Daladier by conservative Gaston Doumergue. In foreign policy, Maurras and Bainville supported Pierre Laval's double alliance with Benito Mussolini's Fascist Italy and with the United Kingdom in the Stresa Front (1935) on one side, and with the Soviet Union on the other side, against the common enemy Nazi Germany. The Action française greeted Franco's appearance with delight, and supported the self-proclaimed Caudillo during the Spanish Civil War (1936–39). But the extra-parliamentary agitation brought by the various far-right leagues, including the AF, led Pierre Laval's government to outlaw militias and paramilitary leagues, leading to the dissolution of the AF on 13 February 1936[4] — the others leagues were dissolved only in June 1936 by the Popular Front.

Marshal Philippe Pétain's proclamation of the Vichy regime and of the Révolution nationale after the failure of the Battle of France was acclaimed by Maurras as a "divine surprise", and he rallied the collaborationist regime. Royalist members hoped that Pétain would restore the monarchy, and the headquarters of the movement were moved from Paris to Vichy. However, the AF members were split between supporting the counter-revolutionary regime and their nationalism: after 1942, and in particular in 1943, some members, such as Henri d'Astier de la Vigerie, Pierre Guillain de Bénouville or Honoré d'Estienne d'Orves joined the Resistance or escaped to join the Free French Forces. Others actively collaborated, while Maurras supported the Vichy government, but theoretically opposed Pétain's collaboration with the Germans. After the Liberation, he was condemned to life imprisonment in 1944, though he was reprieved in 1952. Action française was dissolved in 1944.

In 1971, a breakaway movement, the "Nouvelle Action française" was formed by Bertrand Renouvin, Georges-Paul Wagner and others. It subsequently became the Nouvelle Action Royaliste (NAR), which supported the Orleanist heir (although in his 1968 reprinting of his study on the three French right-wing families, René Rémond still classified it in the legitimist movement because of its counter-revolutionary ideology). The movement called for the support of François Mitterrand in the 1981 presidential election, instead of supporting Jacques Chirac's "neo-Gaullism" movement (the Gaullists are classed by René Rémond as Bonapartists) or Valéry Giscard d'Estaing's "Orleanist" movement (because of his support of economic liberalism).

In the beginning of the 1980s, various AF figures, such as Georges-Paul Wagner or Philippe Colombani (in French) joined the ranks of Jean-Marie Le Pen's National Front (FN). Until the 1999 breakaway of the National Republican Movement (MNR) led by Bruno Mégret, Jean-Marie Le Pen's success was partly explained by his unification of the various far right families (such as Traditionalist Catholics, royalists, neofascists, etc.) which share few ideals apart from a distrust of liberal democracy and a staunch anti-communism.

The AF movement still exists as the monarchist and anti-European Union "Centre royaliste d'Action française" and publishes a magazine called Action française 2000. Its leader was Pierre Pujo (Maurice Pujo's son), who died in Paris on 10 November 2007.[5] The student movement, called Action française étudiante, has approximately 15 local delegations (in places such as Paris, Normandy, Rennes, Bordeaux, and Forez) and a newspaper, Insurrection. Its President is Oliver Perceval.

Present-day scholars regard Nolte's view as extreme and archaic. For example, in 1999, the British historian Richard Thurlow[7] claimed that "his [Nolte's] linking of Action française to the fascist tradition was misleading".[8] Later, René Rémond and Stanley G. Payne described the differences between Action française and Italian fascism.[1][9] Dr. Jonathan Judaken[10] classified Action française as an extreme right movement,[2] and did not refer to it as fascist.

Influence on national syndicalism and fascism

Although it supported the Orleanist branch, according to historian René Rémond's categorization of French right-wing families, it would be closer to the legitimist branch, characterized by a complete rejection of all changes to France since the 1789 French Revolution. According to Rémond supporters of the Orleanist branch tended to favour economic liberalism.