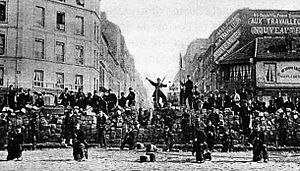 Barricade at the Paris Commune, 1871 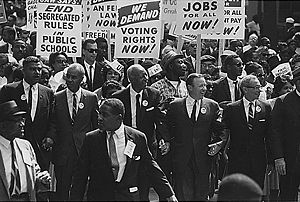 Civil rights activists at the March on Washington for Jobs and Freedom, 1963 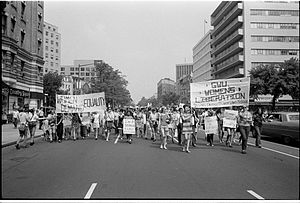 Activism consists of efforts to promote, impede, or direct social, political, economic, or environmental change, or stasis with the desire to make improvements in society and to correct social injustice. Forms of activism range from writing letters to newspapers or to politicians, political campaigning, economic activism such as boycotts or preferentially patronizing businesses, rallies, street marches, strikes, sit-ins, and hunger strikes. One can also express activism through different forms of art (Artivism). Daily acts of protest such as not buying clothes from a certain clothing company because they exploit workers is another form of activism. One view holds that acknowledging privileges and oppressions on a daily basis ranks as a form of activism.[1] Research has begun to explore how activist groups use social media to facilitate civic engagement and collective action.[2][3]

The Online Etymological Dictionary records the English words "activism" and "activist" (in the political sense) from 1920[4] and from 1915[5] respectively.

Activists can function in roles as public officials, as in judicial activism. Arthur Schlesinger, Jr., introduced the term "judicial activism" in a January 1946 Fortune magazine article titled "The Supreme Court: 1947".[6] Activists are also public watchdogs and whistle blowers, attempting to understand all the actions of every form of government that acts in the name of the people: all government must be accountable to oversight and transparency. Activism is an engaged citizenry.

In his 2008 book, Liberating Voices: A Pattern Language for Communication Revolution,[7] Douglas Schuler suggests something he calls an activist road trip, whereby activism and road trips are merged into an activity that can be pursued on geographical levels that range from neighborhood to international.[8]

As with those who engage in other activities such as singing or running, the term may apply broadly to anyone who engages in it even briefly, or be more narrowly limited to those for whom it is a vocation, habit, or characteristic practice. In the narrower sense, environmental activists that align themselves with Earth First or Road Protestors would commonly be labeled activists, whilst a local community fighting to stop their park or green being sold off or built on would fit the broader application, due to their using similar means to similarly conservative ends. In short, activism is not always an action by Activists.[9]

Since the 1990s, the Internet has been a tool used by activists for mobilization and communication of causes. Specific platforms like MoveOn.org, founded in 1998, allow individuals to establish petitions and movements for social change. Protesters in Seattle in 1999 used email to organize protests against the WTO Ministerial Conference. Throughout the 2000s, protesters continued to use social media platforms to generate interest. The power of Internet Activism came into a global lens with the Arab Spring protests. People living in the Middle East and North African countries that were experiencing revolutions used social networking to communicate protests, which put the issues in front of an international audience.[10]

The term activism industry has often been used to refer to outsourced fundraising operations. However, activist organizations engage in other activities as well.[11] Lobbying, or the influencing of decisions made by government, is another activist tactic. Many groups, including law firms, have designated staff assigned specifically for lobbying purposes. In the United States, lobbying is regulated by the federal government.[12]

Many government systems encourage public support of non-profit organizations by granting various forms of tax relief for donations to charitable organizations. Governments may attempt to deny these benefits to activists by restricting the political activity of tax-exempt organizations. 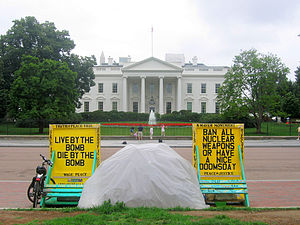 The longest running peace vigil in U.S. history, started by activist Thomas in 1981.