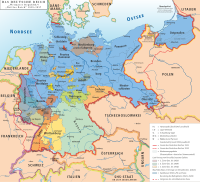 Following the suppression of the individual Länder (states) of Weimar Germany in 1934, the Gaue (Singular: Gau) were the de facto administrative sub-divisions of Nazi Germany.

The Nazi Gaue were formed in 1926 as Nazi party districts of the respective German states and Prussian provinces as shaped in the aftermath of World War I.[1] Each Gau had an administrative leader, the Gauleiter (Gau leader). Though Länder and Prussian provinces continued to exist after the Enabling Act of 1933, their administration was reduced to a rudimentary body attached to the respective Nazi Gau administration in the Gleichschaltung process. In total, Germany consisted of 32 Gaue in 1934, and 42 Gaue at its collapse in 1945.[2]

The regions occupied in 1938 (Austria, Sudetenland) and early 1939 (Memelland) as well as the areas conquered during the Second World War were either incorporated into existing Gaue or organised in Reichsgaue, similar to the Gaue in all but name. In the Reichsgaue, the Gauleiter also carried the position of Reichsstatthalter,[1] thereby formally combining the spheres of both party and state offices. A special political award, known as the Gau Badge, was issued in most Nazi Gaue.

Eventually, in the aftermath of its defeat in the war, and the Yalta Conference, Germany would lose not only the newly annexed territories but some of the territories it held before the Nazi government assumed power; it would also spend most of the following second half of the 20th century divided into two separate states. 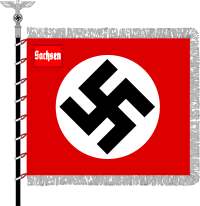 The Gaue existed parallel to the German states, the Länder, and Prussian provinces throughout the Nazi period. Pro forma, the Administrative divisions of Weimar Germany was left in place. The plan to abolish the Länder was ultimately given up because Hitler shrank away from structural reforms, a so-called Reichsreform, fearing it would upset local party leaders. For the same reason, the borders of the Gaue remained unchanged within Germany throughout this time. The Gaue were only enlarged through the adding of occupied territories after 1938.[3] While the Länder continued to exist, the real power on local level did lie with the Gauleiters, not the Minister Presidents of the German states. The Gauleiters were directly appointed by Hitler and only answerable to him. In practice, interference from above was rare and their power almost absolute.[1]

Reichsgaue established in the 1930s

Of the territories annexed from Poland and the Free City of Danzig in 1939, Reichsgau Wartheland and Reichsgau Danzig-West Prussia were created. Annexed territories of pre-war Poland not within these two Reichsgaue was incorporated into the neighboring Gaue East Prussia and Silesia. The Grand Duchy of Luxembourg as well as Alsace-Lorraine, annexed from pre-war France in 1940, were attached to the bordering Southwestern Gaue of Nazi Germany.

There was also an extraterritorial Gau named Auslandsorganisation for party members overseas. Its headquarters were in Berlin. This Auslandsgau was considered to be the 43rd Gau of Nazi Germany.

After the overthrow of Benito Mussolini, the Italian government secretly began negotiations with the Allies about Italy switching sides to the Allied camp. In retaliation the Germans occupied large parts of Italy, freed Mussolini, and re-installed him as the puppet ruler of a new fascist state in those parts that were occupied by the German Army. While officially in control over all the areas held by erstwhile Fascist Italy, large parts in the northeast located between Switzerland and the Adriatic were re-organized as Operational Zones (Operationszonen). These were informally annexed by Germany, and attached to adjacent Gaue of the Reich. There were two such Operational Zones:

In a supplementary OKW order dated 10 September 1943, Hitler decrees on the establishment of further Operational Zones in Northern Italy, which were the stretch all the way to the French border.[5] Unlike Alpenvorland and Küstenland, these zones did not immediately receive high commissioners (oberster kommissar) as civilian advisors, but were military regions where the commander was to exercise power on behalf of Army Group B.[5] Operation zone Nordwest-Alpen or Schweizer Grenze was located between the Stelvio Pass and Monte Rosa and was to contain wholly the Italian provinces of Sondrio and Como and parts of the provinces of Brescia, Varese, Novara and Vercelli.[6] The zone of Französische Grenze was to encompass areas west of Monte Rosa and was to incorporate the province of Aosta and a part of the province of Turin, and presumably also the provinces of Cuneo and Imperia.[6] 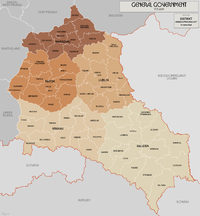 The General Government in August 1941.

In those parts of Poland that were not directly annexed into the German Reich a separate civil administration was set up called the General Government (of the Occupied Polish Territories).[7] While theoretically outside the boundaries of the Reich proper, it was considered part of Greater Germany by Nazi officials as an "autonomous" region (i.e. not directly subordinated to the Berlin government).[8]

It was in turn sub-divided into four distrikten (districts).

After the invasion of the Soviet Union in 1941, a fifth district was added, created out of former territories of Austrian Galicia:

Protectorate of Bohemia and Moravia

Government district within the protectorate.

After the resulting agreement at the Munich Conference had granted Germany control over considerable parts of interwar Czechoslovakia, the remainder was formally subordinated to German rule in March 1939. While Slovakia became a separate satellite state of Germany, the remaining Czech lands were turned into a Protectorate of Bohemia and Moravia under German dominion.[10]

Two separate structures for its territorial administration existed within the protectorate.[11] The Protectorate was officially divided into two Länder (lands): Bohemia and Moravia, which were in turn sub-divided into a number of smaller units. The Nazi party implemented a completely different form of organization by setting up four separate party districts in the area, and subordinating these organizationally to the surrounding Gaue and Reichsgaue: Sudetenland, Bayreuth (Bayerische Ostmark), Lower Danube, and Upper Danube.[11] These two methods continued to co-exist in the protectorate for the entire duration of its existence.[11]

The Nazi government openly pursued and practiced aggressive territorial expansionism, intending to further extend the already greatly increased territorial base of the German state.[12] In anticipation of these expected future territorial enlargements, potential new districts were theorized upon at length by Nazi ideologists, government officials, and territorial planning departments. These expansions were intended to take place in two distinct ways:

In order to expand the Lebensraum of the German people the Slavic populations of Eastern Europe were intended to be wiped out through a combined process of extermination, expulsion, starvation, and enslavement that would effectively Germanize these territories in the long run.[13] Nazi racial offices planned that the colonization with Germanic peoples of these conquered eastern territories was to proceed most intensively in the three so-called Siedlungsmarken (Settlement marches) or Reichsmarken of Ingermannland (Ingria), the Memel-Narew area, and the Southern Ukraine and the Crimean peninsula.[14] The latter of these was intended to be newly re-organized as a Gotengau (Gau of the Goths), in honor of the Crimean Goths who had at one point dwelled there.[14] Of the Baltic countries, Peipusland was proposed as a replacement-name for Estonia, and Dünaland for Latvia.[15]

In a conference on July 16, 1941 discussing the future organization of the conquered Soviet territories Hitler stated his intention to turn not only the above-mentioned areas, but also the entire Baltic region (Reichskommissariat Ostland), the Volga German colony, and the Baku district into future Reichsgebieten (Reich territories).[16] On 3 November 1941 he also elaborated on the toponymic aspect of Germanizing the east:

In the eastern territories I will replace the Slavic geographic names with German names. The Crimea could for instance be called Gotenland. [...] We need names that will confirm our rights which go back for two-thousand years.

The central and upper Vistula valley within the General Government were variously discussed as having to become either a single Vandalengau (Gau of the Vandals) or 3-5 other new Reichsgaue.[18] An earlier proposal from 1939 also advocated for the creation of a Reichsgau Beskidenland, which was to stretch from the area to the west of Cracow to the San river in the east.[19] In Axis-occupied Yugoslavia, Sepp Janko, Nazi representative of Danube Swabian interests, pushed for the establishment of a Reichsgau Banat or Prinz-Eugen-Gau, which would have encompassed the Yugoslavian territories of Bačka, Banat, parts of Transylvania (Siebenbürgen) and Baranya.[20]

Annexation of the Germanic countries

The Nazi racial categorization of the ethnic groups of Europe classified the Northern Europeans, especially those closely related to the Germans (itself considered to be a single nationality of which Swiss and Austrians were nothing but sub-regional identities at best) such as the Dutch, the Flemings, the Danish, Norwegians, Swedish, and English as part of a superior Aryan-Nordic master race (Herrenrasse).[21][22] Following the integration of Austria into a Greater Germany (Großdeutschland), Hitler decided that he would follow the same policy in the future for all other countries that he regarded by virtue of their perceived racial qualifications as "belonging" to the Reich.[23] This meant that the Low Countries, at least the German-speaking parts of Switzerland, Liechtenstein[24] and the Scandinavian states were eventually to be annexed into a much larger Greater Germanic Reich (Großgermanisches Reich) by being broken up into smaller state and party administrative units, such as Denmark into a Gau Nordmark,[25] and the Netherlands into a Gau Westland.[26]

Afterwards the very notion of these countries ever having been independent or separate from the rest of the Reich was to be suppressed indefinitely.[27] The objective called for the inauguration of a new period of rapidly enforced Gleichschaltung, the end result of which would be that aside from their local "language dialects" these countries were to become perfect duplicates of National Socialist Germany in all political and social respects.[28]

In addition it was intended to revert the western borders of Germany with France to those of the late-medieval Holy Roman Empire. A strip of eastern France from the mouth of the Somme to Lake Geneva (the so-called "closed" or "forbidden" zone of German occupied France) was prepared to be annexed to the German Reich as Reichsgau Burgund, with Nancy (Nanzig) as the capital.[29]