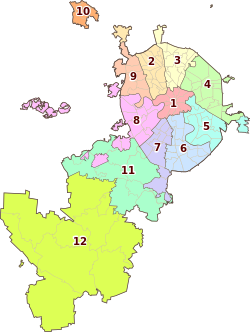 The federal city of Moscow, Russia is divided into twelve administrative okrugs, which are in turn subdivided into districts (raions). The city does not have a downtown area; the urban core is scattered across the city. Prominent business areas include Tverskoy, Arbat, and Presnensky Districts (the latter being home to the Moscow-City complex). Central Administrative Okrug as a whole has a large concentration of businesses. The city hall and major administration buildings are located in Tverskoy District (home to the Moscow Kremlin). Western Administrative Okrug is home to Moscow State University, Sparrow Hills and Mosfilm Studios. The total population of the Federal City of Moscow was 11,503,501 inhabitants at the Russian Census (2010).

While administrative okrugs are a subdivision of state administration, districts have the status of municipal formations, i.e. local self-government entities.

Parts of Moscow Oblast's territory, including the towns of Troitsk, Moskovsky, and Shcherbinka, as well as parts of the territories of Leninsky, Naro-Fominsky, and Podolsky Districts, have been transferred to Moscow on July 1, 2012. The new territories have been organized into two new administrative okrugs — Novomoskovsky and Troitsky.[1]

All territorial units with special status were merged into districts in 2002. 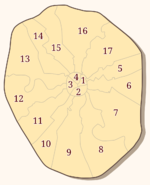 In 1936 Moscow was divided into 7 districts. 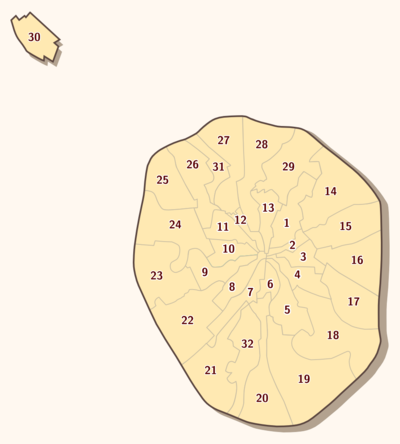 In 1984, a number of localities which previously belonged to Moscow Oblast were appended to Moscow. In particular, the town of Solntsevo was transferred to Moscow, and Solntsevsky District was established.[3]