Ukraine is divided into several levels of territorial entities. On the first level there are 27 regions:[1] 24 oblasts, one autonomous republic, and two "cities with special status".[2] Since the annexation of Crimea by the Russian Federation in March 2014, Ukraine's control of the Autonomous Republic of Crimea and the city of Sevastopol is disputed.

The administrative division in Ukraine was directly inherited (grandfathered) from the local republican administration of the Soviet Union, the Ukrainian Soviet Socialist Republic, and has not changed significanlty since the middle of the 20th century. It is somewhat complex as beside having several levels of a territorial subdivision, it also has a classification for various populated places, particularly cities.

Regions, cities, districts are governed by a state administration, a chief of which is appointed by the president. Crimea has its own cabinet of ministers, however the state administration is represented by the office of the Presidential Representative of Ukraine. A basic and the lowest level of administrative division is a settlement that is governed by a local council (rada). Cities as a settlement always carry a special status within a region and have their own form of self-administration (municipality – vykonkom) and some may consist of their own city's districts (raions). City municipalities are governed by a mayor and a city council (miskrada). Some smaller cities, towns, and rural localities may be under control of city municipalities based on larger cities. Towns as well as villages are not controlled by state administration and are self-governed by either a town council (selyshchna rada) or a village council (silrada) within the limits of the Constitution and the laws of Ukraine (article 140 of the Constitution of Ukraine). Village councils may carry a combined jurisdiction which may include several villages and hamlets (selyshche). Unlike villages, each town council always has a separate jurisdiction which may be part of bigger city's council. Hamlet (selyshche) is a non-governed rural locality and is governed by a village council of nearby village.

Before the introduction of oblasts in 1932, Ukraine comprised 40 okruhas, which had replaced the former Russian Imperial guberniya (governorate) subdivisions.

In 1932 the territory of the Ukrainian SSR was re-established based on oblasts. Excluded in the administrative changes was Western Ukraine, which at that time formed part of the Second Polish Republic and shared in the Polish form of administrative division based on voivodeships.

In the post-World War II period, the Ukrainian Soviet Socialist Republic consisted of 25 oblasts and two cities with special status.

After the fall of the Soviet Union in 1991, Crimea obtained the status of an autonomous republic with its own government instead of a regional state administration.

According to the Article 133 of Constitution of Ukraine, "the system of the administrative and territorial structure of Ukraine is composed of the Autonomous Republic of Crimea, oblasts, districts, cities, city districts, settlements, and villages." Note, that although certain types of subdivision are not mentioned in Constitution of Ukraine (i.e. rural settlements), they are mentioned for regional composition. Also, for disambiguation regular raions (districts) are sometimes denoted as rural to distinguish them from raions in city.[3]

Ukraine is divided into 3 main administrative divisions: oblast (region), raion (district), and council (city, settlement, and village). Note, settlements such as cities do not necessary constitute the basic level of the Ukrainian administrative territorial system. For that purpose cities are categorized into own three categories that correspond to each level of subdivisions. Cities with special status and regional significance beside being divided into special districts in city may also include smaller cities (district significance), settlements, and/or villages. Please, note that the settlement's population size is not the only factor for its status. The final decision on status change is carried out by the Ukrainian parliament. The following table is based on the 2001 Ukrainian Census.[4]

The following numbers are based on the 2001 Ukrainian Census.[4] 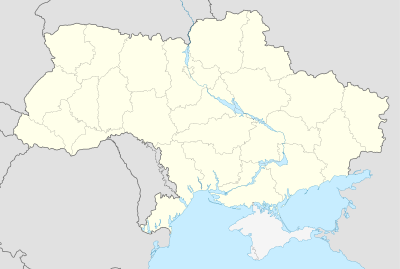 Oblasts are on the first (top) level of the administrative division of Ukraine.

Almost every oblast is named after its administrative center, except for two oblasts, Volyn' (Volhynia) and Zakarpattia (Transcarpathia), whose respective capitals are Lutsk and Uzhhorod.

Two cities carry special status: the city of Kiev which is the capital of Ukraine and the city of Sevastopol. Following the 2014 Crimean crisis, Sevastopol is controlled by Russia and is incorporated as a federal subject of Russia. It is recognized as a part of Ukraine by most of the international community.

Raions are smaller territorial units of subdivision in Ukraine. There are 490 raions.

For more details on this topic, see Populated places in Ukraine. 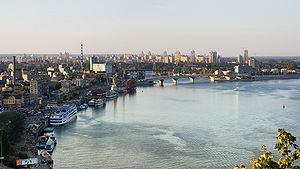 The Dnieper River plays an important part in Ukrainian territorial division, with many large cities settled on its banks. Here, the capital city of Kiev which was founded on the Dnieper's right bank but for now expanded over the river significantly.

Changes to a settlement's status can be made only by the Verkhovna Rada. Please note that the size of a settlement does not ultimately define its status, although is a major factor. For example, the city of Prypiat still retains its status, while having a population of zero, due to its infrastructure, including buildings, roads, and utility networks.

The typical Ukrainian misto ought to be considered a city, not a town (compare to City status in the United Kingdom). However, the city's subordination to either an oblast or raion also should be taken into account, especially in the political sense. Some of urbanized settlements may be cities of raion subordination, although it could seem confusing, a type of settlement should be considered first as its status is given for administrative purposes. 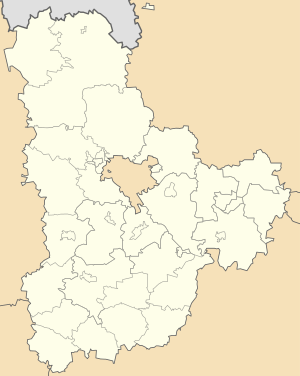 Kiev Oblast for instance, has a couple of "city raions," one of which is Pereiaslav-Khmelnytskyi. Although housing the surrounding raion's administration, the city is no longer subordinate to it. 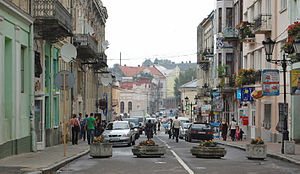 Drohobych, is a city of oblast subordinance, subordinate to the Lviv Oblast authorities rather than to the local Drohobych Raion administration.

According Ukrainian law a city (місто) in Ukraine is a locality of at least 10,000 people.[8] Cities may carry various status. Some may be of national importance, others of regional (oblast) importance, and the rest of district (raion) importance. For example, the cities of Kiev and of Sevastopol have special status of national significance and each is officially classified as a city with a special status, which administratively is equivalent to an oblast. Mayors of those cities, in general, as are governors of oblasts, are appointed by the President of Ukraine. However, the status of the mayor of Kiev is somewhat more complex, and for further information see Legal status and local government of Kiev. The status of Sevastopol is also unique.

Almost every oblast has at least one city of regional subordination (importance), which is the administrative center (capital) of that oblast. However, some other big cities within the oblast may have such status as well. The cities of oblast subordination have the same importance of a raion, and often are the administrative centers of such. In addition to regular raions, several Ukrainian cities with national or oblast status are further divided into city raions which may include other cities, towns, and/or villages. In 2010, Ukraine had 23 such cities with their own city raions.

Ukraine also has several settlements known as viiskove mistechko which were former military installations. Since the fall of the Soviet Union, the secrecy of such settlements has been unveiled, however, the towns are subordinated directly to the Ministry of Defense and do not have their own civil administrations. Such military installations are like ghost towns that are not even identified on a map. One of them, on the border of the Kiev and Zhytomyr Oblasts is Makarov-1.[9]

A special territory known as the zone of alienation falls under the jurisdiction of the Ministry of Emergencies and was the most severely affected territory by the Chernobyl disaster. Additionally, various restricted nature preserves known as Zapovednik fall under the jurisdiction of the Ministry of Ecology. Due to the War in Donbass, the status of civil–military administrations was created in territories of Donetsk and Luhansk oblasts where the respective local government units cannot exercise their constitutionally guaranteed powers.[10] 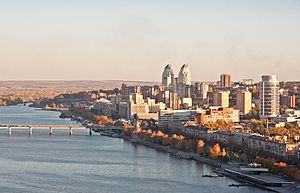 Currently, Ukraine has the following 3 enclaves:

Ukraine has five major agglomerated metropolitan areas (conurbations). These conurbation areas are not officially recognized and remain to be administered according to official oblast-raion system of subdivision. 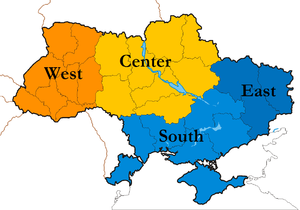 A common geographic division of Ukraine used by the Kiev International Institute of Sociology.