From Infogalactic: the planetary knowledge core
Jump to: navigation, search
For other nations that use this rank, see admiral and Admiral (Germany). 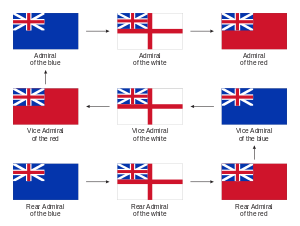 King Edward I of England appointed the first English admiral in 1297 when he named William de Laybourne “Admiral of the sea of the King of England”. The rank of admiral should not be confused with the office of Admiral of England or Lord High Admiral, which was an office held by the person with overall responsibility for the Navy.

In Elizabethan times the fleet grew large enough to be organized into squadrons. The squadron’s admiral wore a red ensign, the vice admirals white, and the rear admirals blue. As the squadrons grew, each was eventually commanded by an admiral (with vice admirals and rear admirals commanding sections) and the official ranks became admiral of the white, etc.

The squadrons ranked in order red, white, and blue, with admirals ranked according to their squadron:

Promotion up the ladder was in accordance with seniority in the rank of post-captain, and rank was held for life, so the only way to be promoted was for the person above on the list to die or resign. Another way was to promote captains to the rank of admiral without distinction of squadron (a practice known as yellowing—the captain so raised became known as a yellow admiral).[1] This was the Navy's first attempt at superannuating older officers: a 'yellow admiral' was in effect being retired on half pay.[2] They were often assigned to shore-based administrative roles, such as commander of a port or Commissioner of one of the Royal Dockyards.

During the Interregnum, the rank of admiral was replaced by that of general at sea.

In the 18th century, the original nine ranks began to be filled by more than one man per rank, although the rank of admiral of the red was always filled by only one man and was known as Admiral of the Fleet.[3] After the battle of Trafalgar in 1805 the rank of admiral of the red was introduced.[3] The number of officers holding each rank steadily increased throughout the 18th and early 19th centuries; in 1769 there were 29 admirals of various grades, by the close of the Napoleonic Wars in 1816 there were 190 admirals in service. Thereafter the number of admirals was reduced and in 1853 there were 79 admirals.

Although the admirals were promoted according to strict seniority, appointments to command were made at the discretion of the Board of Admiralty. As there were invariably more admirals in service than there were postings, many admirals remained unemployed, especially in peacetime.

The 19th-century British Navy also maintained a positional rank known as port admiral. A port admiral was typically a veteran captain who served as the shore commander of a British naval port and was in charge of supplying, refitting, and maintaining the ships docked at harbour.

In 1996, the rank of admiral of the fleet was put in abeyance in peacetime, except for members of the Royal family but was resurrected in 2014 for the appointment of Lord Boyce. Admirals of the fleet continue to hold their rank on the active list for life.

The current ranks are rear admiral, vice admiral, admiral and admiral of the fleet, also known as flag ranks because admirals, known as flag officers, are entitled to fly a personal flag. An admiral of the fleet flies a Union Flag at the masthead, while an admiral flies a St George's cross (red cross on white). Vice admirals and rear admirals fly a St George’s cross with one or two red discs in the hoist, respectively.

The rank of admiral itself is shown in its sleeve lace by a broad band with three narrower bands. Since 2001 it has been designated a four-star rank when the number of stars on the shoulder board was increased to four.[4][5]