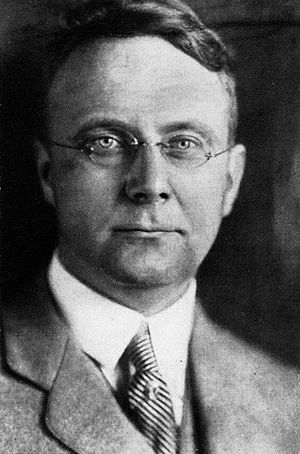 Adolf Köster was born on 8 March 1883 in Verden an der Aller in the Province of Hanover, Prussia.[1] He grew up in Kappeln.

In 1906, he became a member of the Social Democratic Party of Germany (SPD). In 1907, he was awarded a Dr. phil. and in 1912 habilitated in history of literature. He taught at the Technical University of Munich.[1][2]

During the First World War, he was a war correspondent for SPD newspapers like Vorwärts as well as for the Berliner Tageblatt.[1][2]

Following the November Revolution in 1918, he started to work as a Referent at the Reichskanzlei. In 1919, he worked for the Prussian Staatskommissar in Schleswig-Holstein, where he had grown up. He was Abstimmungskommissar, and in that function worked successfully for German interests in the plebiscites.[1][2]

He served as Foreign Minister of Germany from 10 April to 21 June 1920 in the first cabinet of Hermann Müller based on SPD, the Zentrum and the liberal German Democratic Party (DDP).[1]