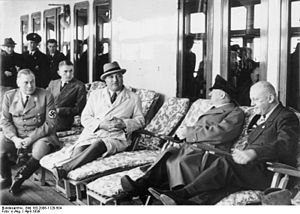 Adolf Wagner (furthest to the right) together with Adolf Hitler, Robert Ley and Wilhelm Brückner in 1939

He served in World War I as an officer in the German Army. A member of the Nazi Party from its earliest days, he was appointed a Gauleiter for various districts in Germany, eventually becoming Gauleiter of Gau München-Oberbayern.[1] He was also Bavarian Minister of the Interior and of cultural affairs, and there held absolute authority in his Gau despite nominally reporting to Reichsstatthalter and Prime Minister Ludwig Siebert. Wagner served as the master of ceremonies for the annual commemorations of the 1923 Beer Hall Putsch every 9 November in Munich.

As Bavarian Education Minister, in April 1941 he ordered that school prayer should be replaced by Nazi songs and that crucifixes and religious pictures be removed from Bavarian classrooms, which outraged the Roman Catholic Church and the general public.[2] The opposition to this move was so strong that Wagner was forced to rescind the order, one of the rare circumstances of successful public opposition in Nazi Germany.

Despite this faux pas, Hitler apparently remained on good terms with Wagner. When Wagner died in April 1944, two years after suffering a stroke that had effectively incapacitated him, the increasingly reclusive Führer made a rare public appearance to attend his lavish funeral, and posthumously awarded him the German Order, the Nazi Party's highest decoration.

Rare 8 mm color film of Wagner appears in home movies (c. 1938) filmed by Hitler's companion, Eva Braun. He can be seen talking with Hitler on the terrace of Hitler's Bavarian residence the Berghof, near Berchtesgaden.[3]