Adolphe Célestin Pégoud (13 June 1889 - 31 August 1915) was a French aviator and flight instructor who became the first fighter ace in history during World War I.

Adolphe Célestin Pégoud was born 13 June 1889 in Montferrat, France.[1] Pégoud served in the French Army from 1907 to 1913. Discharged on 13 February 1913, he immediately began flying, and earned his pilot's certificate 1 March 1913. Using a sacrifice aircraft, Pégoud was the first pilot to make a parachute[2] jump from an airplane. During the first jump, observing the unexpected path of the plane and particularly a loop-like trajectory, he was convinced he could reproduce and control the same in flight. After landing, Pégoud addressed reporters: "I've seen him, alone, looping the loop. So you see that this is possible. Also, I will try!"

As a test pilot for Louis Blériot, he devoted himself to this goal with a Blériot model XI monoplane in a series of test flights exploring the limits of airplane maneuvers. Having modified his airplane, and after a realistic "head down" ground training, he then flew the first inverted flight on 1 September 1913.

Then, on 21 September he flew a loop,[3] believing it to be the world's first. Pégoud's feat was consequently widely publicized and believed by many to be the first loop, although Pyotr Nesterov, a Russian army pilot, had flown the first one on 9 September 1913, just 12 days earlier, in a Nieuport IV monoplane at an army airfield near Kiev. In fact, Pégoud was the first to have mastered the loop. Soon after his feat of 21 September, he was invited by the Czar of Russia to perform in Moscow a series of demonstrations followed by student training.

Pégoud became a popular instructor of French and other European fledgling pilots. 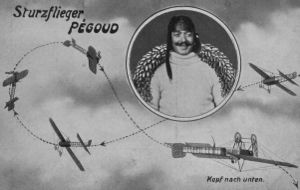 At the start of World War I, Pégoud volunteered for flying duty and was immediately accepted as an observation pilot. On 5 February 1915, he and his gunner were credited with shooting down two German aircraft and forcing another to land.[3] Soon he was flying single-seat aircraft and in April claimed two further victories. His sixth success came in July. 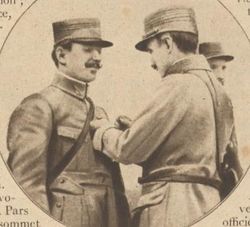 It is not known how many of Pégoud's victories involved destruction of enemy aircraft, as early air combat was rare enough to warrant credit for a forced landing. However, it is certain that Pégoud, rather than Roland Garros (four documented victories), was the first pilot to achieve ace status of any sort.[4]

On 31 August 1915, Pégoud was shot down and killed by one of his pre-war German students, Unteroffizier Walter Kandulski,[1] while intercepting a German reconnaissance aircraft. He was 26 years old. The same German crew later dropped a funeral wreath behind the French lines. A false report stated that two weeks later Kandulski was shot down by the French pilot Roger Ronserail. In fact Kandulski survived the war.[5]