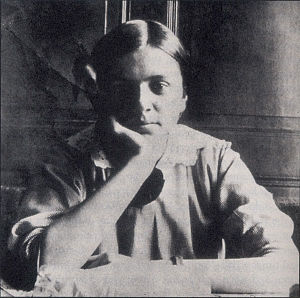 Adrienne von Speyr (20 September 1902 - 17 September 1967) was a Swiss Catholic physician, writer and theologian. She was the author of over 60 books of spirituality and theology, and a mystic and stigmatist.

Adrienne von Speyr was born in La Chaux-de-Fonds, Switzerland. Her father, Theodor von Speyr, was an ophthalmologist. Her mother, Laure Girard, was the descendant of a family of noted watchmakers and jewelers from Geneva and Neuenburg. Speyr was her parents' second child. Her sister, Helen, was a year-and-a-half older. Her first brother, Wilhelm, who became a physician, was born in 1905 and died in 1978. Her second brother, Theodor, was born in 1913 and became the director of a bank in London for many years.[1]

Speyr's mother scolded her daily, and this led her to form a strong trust and devotion to God, as well as a recognition of the meaning of sacrifice and renunciation. She formed a deep relationship with her grandmother, a holy and pious woman. She also had a devotion to her father, who treated her with mutual respect and understanding, often taking her with him to the hospital to visit sick children. In her primary school years she began working with the poor and even formed a society with her friends for those living in poverty.

A very bright student, Speyr occasionally substituted for one of her teachers who suffered from asthma. It was in her religion classes that she began to sense the emptiness of the Protestantism that was being offered to her.[2] At the age of nine she gave a talk to her classmates about the Jesuits, believing that an angel had told her "that the Jesuits were people who loved Jesus totally, and that the truth of God was greater than that of men, and as a result one could not always tell people everything exactly as one understands it in God".[3] She later told Father von Balthasar that when she was six years old she had a mysterious encounter with St. Ignatius while walking up a steep street on Christmas Eve.

In her secondary school years she reproached her religion teacher for failing to discuss other religious beliefs, especially Catholic teachings.[3]

Adrienne was often sick and had constant backaches that forced her to lie down for long periods of time. She would always become ill before Easter;[3] she explained that it was due to Good Friday. Despite her physical sufferings,[4] she focused on helping others who were suffering, spending time comforting and encouraging hospital patients. Not surprisingly, she went to secondary school with the intention of becoming a doctor, a decision supported by her father but not her mother. And after two years of secondary school, her mother was successful in having her removed on grounds that it allowed too much association with boys. Adrienne then spent a year in an advanced girls’ school; although unhappy, she met her best friend, Madeleine Gallet. The two of them talked constantly about God, the spiritual life, and how they might convert their classmates.[5]

Speyr father permitted her to return to secondary school. Although she was the only girl in her class, she was very popular due to her charm and humor[5] and natural leadership. In November 1917 she experienced a mystical vision, an appearance of Mary surrounded by angels and saints; her later work would always be marked with a deeply Marian character.

Around this same time Speyr knew, she said,[6] that her father would soon die. After his death (from a perforated stomach), she attended both business school and secondary school. In 1918 she suffered a total physical collapse brought on by tuberculosis in both lungs. The doctors believed she would die within a year. She was sent to Leysin; there she was cared for by Charlotte Olivier, a relative by marriage and a doctor. Meanwhile, her mother distanced herself even further from her. Speyr spent time reading and learning Russian. It was in Leysin–where she would often pray in a cold Catholic chapel–that she began to believe that she was being called to the Catholic Church. There was another physical collapse, followed by a return to school.

Her mother arranged for a job and a possible husband, but Speyr resolved to be a doctor; this led to a lengthy period of silence between mother and daughter.[6] She pursued her studies and an internship; in "these and many other experiences", noted Father von Balthasar, "Adrienne learned to seek the God whom she had not yet succeeded in truly finding by the way of service to neighbor."[citation needed] 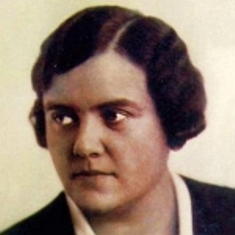 In the summer of 1927 Speyr met a history professor, Emil Dürr, a widower with two young sons. They married, ans shortly after the wedding Adrienne passed her state boards to become a physician; she was the first woman in Switzerland to be admitted to the medical profession. Dürr died suddenly in 1934, and in 1936 his widow married Werner Kaegi, an associate professor under Dürr who took over his Chair of History at the University of Basel.

During the next few years Adrienne made several unsuccessful attempts to contact Catholic priests, to inform them of her desire to convert. In the fall of 1940 she was introduced to Father Hans Urs von Balthasar, a Jesuit priest recently appointed as the students' chaplain in Basel. She told him of her desire to become a Roman Catholic, and was baptized on 1 November 1940, the Feast of All Saints, when she was 38. Soon after, she was confirmed. Her family was initially shocked; it would take years for a reconciliation with them to take place.

Adrienne proceeded to form friendships with many great Catholic thinkers, including Romano Guardini, Hugo Rahner, Erich Przywara, Henri de Lubac, Reinhold Schneider, Annette Kolb, and Gabriel Marcel. Meanwhile, her medical practice was very successful; she had as many as sixty to eighty patients a day.

Fr. von Balthasar wrote that shortly after her conversion "a veritable cataract of mystical graces poured over Adrienne in a seemingly chaotic storm that whirled her in all directions at once. Graces in prayer above all: she was transported beyond all vocal prayer or self-directed meditation upon in order to be set down somewhere after an indeterminate time with new understanding, new love and new resolutions." This included "an increasingly open and intimate association with Mary…" Driving home one night shortly after her conversion, she saw a great light in front of the car and she heard a voice say: "Tu vivras au ciel et sur la terre" (You shall live in heaven and on earth). This was "the key to all that was to follow" in her life.

The years following 1940 were filled with much physical pain, including a heart attack, diabetes, severe arthritis, and eventually blindness; mystical experiences, including the stigmata; and a close relationship with Fr. von Balthasar, who became her spiritual director and confidant and with whom she co-founded a secular institute, the Johannesgemeinschaft (Community of St. John). While in a state of contemplative, mystical prayer, she dictated to Fr. von Balthasar over sixty books, including commentaries on the Bible (the Johannine writings, some of St. Paul, the Catholic Epistles, the Apocalypse, and parts of the Old Testament) and various theological topics. Fr. von Balthasar wrote, "She seldom dictated for more than half an hour per day. During vacations she would occasionally dictate for two or three hours, but this was rare." The result was some sixty books dictated between 1940 and 1953. "Her spiritual productivity knew no limits," wrote Fr. von Balthasar, "we could just as well have two or three times as many texts of hers today."

By 1954 she was so ill that she had to discontinue her medical practice. She spent hours each day in prayer, knitting clothing for the poor, and reading Bernanos and Mauriac, among other French authors. From her mid-fifties onward she was so ill that physicians wondered how she remained alive. In 1964 she went blind. Her last months were filled with "continuous, merciless torture," said Fr. von Balthasar, "which she bore with great equanimity, always concerned about the others and constantly apologetic about causing me so much trouble." She died in Basel, Switzerland on 17 September 1967, the Feast of St. Hildegard, who was also a mystic and physician.[7]

Analysis of Speyr and her work

Balthasar wrote that the three characteristics of Speyr that were most striking were her joyousness, her courage, and her ability to remain a child, having a childlike clarity and wonder about her. In Our Task he provides this character sketch:.[8]

She was marked by humour and enterprise. She was like the boy in the fairy tale who sets off to experience fear. At her mother’s instigation she had to leave high school but secretly studied Greek at night by the light of a candle, so she could keep up with the others. In Leysin she learned Russian. After her transfer to the high school in Basel, she quickly learned German and at the same time took a crash course in English to catch up with the rest of the class. As I said, she paid for her medical studies by tutoring. Then there is her courageous readiness to stand up for justice. When a teacher struck a boy in the face with a ruler, she rushed forward, turned the teacher to the face the class, and shouted: "Do you want to see a coward? Here’s one!" On one occasion in the lecture theatre an intern gave an injection to a patient which promptly killed him. The intern falsely blamed it on the nurse and was defended by the professor. Adrienne got her fellow students to boycott the professor’s lectures for so long that he had to move to another university. It was precisely this courage, maintained in the face of the most extreme physical pain, which enabled her after her conversion to take on, for decade after decade, every kind of spiritual and bodily suffering, especially participation in the agony of Christ in Gethsemane and on the Cross. Indeed, when she realised its significance for the reconciliation of the world, she constantly asked for it.

From "How Does One Read Adrienne von Speyr?" by Hans Urs von Balthasar:[9]

Faced with the quantity of her writings, many are at a loss; they struggle through two or three books and then, on account of the seeming endlessness, they lose the desire and courage to read further. For those I repeat what I said previously: something that has grown out of slow meditation is also properly absorbed only slowly and meditatively. This is especially true of the commentaries on Scripture; they are best suited as a preparation for one’s own contemplative prayer. One reads the verse of Scripture, then Adrienne von Speyr’s reflections on it, and uses them as ‘points of meditation’. For example, the Sermon on the Mount, the Passion According to Matthew, the Letter to the Philippians, and the Letter to the Colossians, the Psalms, and the Parables.

A different approach to her work is offered by her smaller, treatise-like works, which develop a special aspect of her theological vision. Before all others, the Handmaid of the Lord should be read, then works of smaller scope like the Gates of Eternal Life, The Immeasurable God, The Face of the Father, and similar ones. From this point, the more extensive works like The World of Prayer and Confession are more easily accessible.[10]