Adyghe (/ˈædᵻɡeɪ/ or /ˌɑːdᵻˈɡeɪ/; Circassian language: Адыгэ Adyge) are Western Circassian (Russian: Адыгейцы Adygeytsy), peoples of the northern Caucasus, who speak the Adyghe language. In a wider sense, "Adyghe" can also refer to all of the Circassian peoples (whose native demonym is Адыгэ Adyge; Russian: Адыги Adygi). 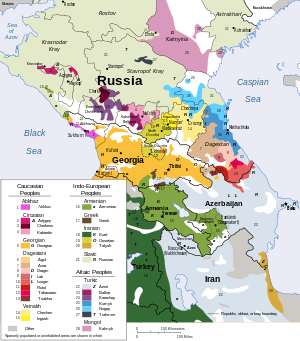 The political history of the Adyghe proper since the Russian Revolution is complex. On 27 July 1922, a Circassian (Adygea) Autonomous Oblast was established in the Kuban-Black Sea Oblast, which would later become Krasnodar Krai. After several name changes, the Adyghe Autonomous Oblast was established on 3 August 1928. On 5 October 1990, the Adygea ASSR was proclaimed and separated from Krasnodar Krai. On 24 March 1992, it became the Republic of Adygea. A significant population of the Adyghe community now lives in the Black Sea region of Northern Turkey where their culture is preserved in villages in the area.[7]