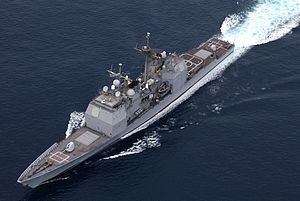 The Aegis Combat System is an integrated naval weapons system developed by the Missile and Surface Radar Division of RCA, and now produced by Lockheed Martin. It uses powerful computer and radar technology to track and guide weapons to destroy enemy targets.

Initially used by the United States Navy, Aegis is now used also by the Japan Maritime Self-Defense Force, Spanish Navy, Royal Norwegian Navy, and Republic of Korea Navy. Over 100 Aegis-equipped ships have been deployed in five navies worldwide. The Royal Australian Navy selected the Aegis system for placement on its new Air Warfare Destroyers, and it is part of NATO's European missile defence system.[1]

The word "Aegis" is a reference that dates back to Greek mythology, with connotations of a protective shield, as the Aegis was the buckler (shield) of Zeus, worn by Athena. 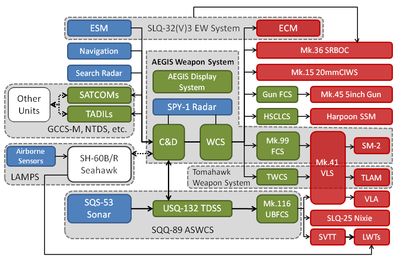 The diagram of the Aegis Combat System (Baseline 2-6). 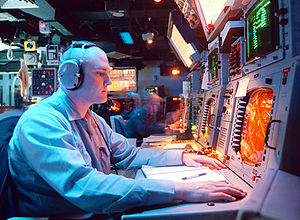 The Aegis Combat System (ACS) is an advanced command and control (command and decision, or C&D, in Aegis parlance) and weapon control system (WCS) that uses powerful computers and radars to track and guide weapons to destroy enemy targets.

The ACS is composed of the Aegis Weapon System (AWS), the fast-reaction component of the Aegis Anti-Aircraft Warfare (AAW) capability, along with the Phalanx Close In Weapon System (CIWS), and the Mark 41 Vertical Launch System.[2] Mk 41 VLS adopts a modular design concept, which results in different versions that vary in size and weight. The length comes in three sizes: 209 in (5.3 m) for the self-defense version, 266 in (6.8 m) for the tactical version, and 303 in (7.7 m) for the strike version. The empty weight for an 8-cell module is 26,800 lb (12,200 kg) for the self-defense version, 29,800 lb (13,500 kg) for the tactical version, and 32,000 lb (15,000 kg) for the strike version, thus incorporating anti-submarine warfare (ASW) systems and Tomahawk Land Attack Cruise Missiles (TLAM). Shipboard torpedo and naval gunnery systems are also integrated.

AWS, the heart of Aegis, comprises the AN/SPY-1 Radar, MK 99 Fire Control System, WCS, the Command and Decision Suite, and SM-2 Standard Missile family of weapons; these include the basic RIM-66 Standard, the RIM-67 extended range missile, and the newer RIM-161 designed to counter ballistic missile threats. A further SM-2 based weapon, the RIM-174 Standard ERAM is currently in testing, and may be integrated into the system in the near future. Individual ships may not carry all variants; weapons load-outs are adjusted to suit assigned mission profile. The Aegis Combat System is controlled by an advanced, automatic detect-and-track, multi-function three-dimensional passive electronically scanned array radar, the AN/SPY-1. Known as "the Shield of the Fleet", the SPY high-powered (6 megawatt) radar is able to perform search, tracking, and missile guidance functions simultaneously with a track capacity of well over 100 targets at more than 100 nautical miles (190 km).[3] However the AN/SPY-1 Radar is mounted lower than the AN/SPS-49 radar system and so has a reduced radar horizon.[4]

The Aegis system communicates with the Standard missiles through a radio frequency (RF) uplink using the AN/SPY-1 radar for mid-course update missile guidance during engagements, but still requires the AN/SPG-62 radar for terminal guidance. This means that with proper scheduling of intercepts, a large number of targets can be engaged simultaneously.

The computer-based command-and-decision element is the core of the Aegis Combat System. This interface makes the ACS capable of simultaneous operation against almost all kinds of threats. The Aegis Ballistic Missile Defense System (BMD) program is intended to enable the Aegis system to act in a sea-based ballistic missile defense function, to counter short- and medium-range ballistic missiles of the variety typically employed by a number of potential opponent states. As of January, 2014, the US and Japan were the only countries to purchase or deploy the Aegis BMD.[5][6]

Aegis was initially developed by the Missile and Surface Radar Division of RCA, which was then acquired by General Electric. The division responsible for the Aegis systems became Government Electronic Systems. This, and other GE Aerospace businesses, were sold to Martin Marietta in 1992.[7] This became part of Lockheed Martin in 1995. 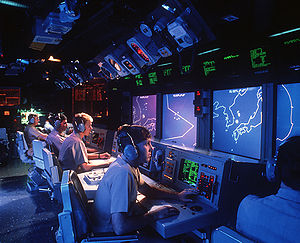 By the late 1950s, the U.S. Navy replaced guns with guided missiles on its ships. These were sufficient weapons but by the late 1960s, the U.S. Navy recognized that reaction time, firepower, and operational availability in all environments did not match the anti-ship missile threat.[citation needed] The new threat of Soviet anti-ship missiles exposed a weakness in contemporary naval radar. The requirements of both tracking and targeting these missiles was limited by the number of radars on each ship, which was typically 2–4. In 1958 the navy started the Typhon Combat System, a prophetic program culminated in the futuristic, but unreliable AN/SPG-59 phased array radar which was never made viable and was canceled in 1963 to be replaced by the Advanced Surface Missile System (ASMS).[8]

As a result, the US Navy decided to develop a program to defend ships from anti-ship missile threats. An Advanced Surface Missile System (ASMS) was promulgated and an engineering development program was initiated in 1964 to meet the requirements.[9] ASMS was renamed "Aegis" in December 1969 after the aegis, the shield of the Greek god Zeus. The name was invented at the suggestion of Captain L. J. Stecher, a former Tartar Weapon System manager, after an internal U.S. Navy contest to name the ASMS program was initiated. Captain Stecher also submitted a possible acronym of Advanced Electronic Guided Interceptor System although this definition was never used.[10] The main manufacturer of the Aegis Combat System, Lockheed Martin, makes no mention of the name Aegis being an acronym, nor does the U.S. Navy.

Because the Aegis Combat System is the key component of several cruiser and destroyer class vessels, the ships are often incorrectly referred to as "Aegis class cruisers" or "Aegis class destroyers". In reality, the radar system and the class of ship it is installed on are unrelated to each other. 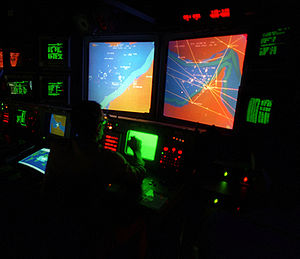 The first Engineering Development Model (EDM-1) was installed in a test ship, the USS Norton Sound, in 1973.[11] During this time frame, the Navy envisioned installing the Aegis Combat System on both a nuclear-powered "Strike Cruiser" (or CSGN) and a conventionally powered destroyer (originally designated DDG 47). The CSGN was to be a new, 17,200 ton cruiser design based on the earlier California and Virginia-class cruisers. The Aegis destroyer design would be based on the gas turbine powered Spruance class. When the CSGN was cancelled, the Navy proposed a modified Virginia class design (CGN 42) with a new superstructure designed for the Aegis Combat System and with a displacement of 12,100 tons. As compared to the CSGN, this design was not as survivable and had reduced command and control facilities for an embarked flag officer. Ultimately this design was also cancelled during the Carter Administration due to its increased cost compared to the non-nuclear DDG 47. With the cancellation of the CGN 42, the DDG 47 Aegis destroyer was redesignated as CG 47, a guided missile cruiser.

The first cruiser of this class was USS Ticonderoga, which used two twin-armed Mark-26 missile launchers, fore and aft. The commissioning of the sixth ship of the class, USS Bunker Hill opened a new era in surface warfare as the first Aegis ship outfitted with the Martin Marietta Mark-41 Vertical Launching System (VLS), allowing a wider missile selection, more firepower, and survivability. The improved AN/SPY-1B radar went to sea in USS Princeton, ushering in another advance in Aegis capabilities. USS Chosin introduced the AN/UYK-43/44 computers, which provide increased processing capabilities.

During 1980, a destroyer was designed using an improved sea-keeping hull form, reduced infrared and radar cross-sections, and upgrades to the Aegis Combat System. The first ship of the Arleigh Burke class, USS Arleigh Burke, was commissioned during 1991.

Flight II of the Arleigh Burke class, introduced in 1992, incorporated improvements to the SPY radar, and to the Standard missile, active electronic countermeasures, and communications. Flight IIA, introduced in 2000, added a helicopter hangar with one anti-submarine helicopter and one armed attack helicopter. The Aegis program has also projected reducing the cost of each Flight IIA ship by at least $30 million.

The Multi-Mission Signal Processor (MMSP) provides Anti-Air Warfare (AAW)/Ballistic Missile Defense (BMD) multi-mission capability for the first 28 ships (DDG 51-78) of the US Navy's Arleigh Burke-class destroyer as part of the Aegis Modernization Program. This capability will also be incorporated in USS John Finn and following new construction, and as well as Aegis Ashore. MMSP modifies transmitters of the SPY-1D radar to enable dual-beam operation for reduced frame times and better reaction time, and provides stability for all D(V) waveforms. The SPY-1 radar system detects, tracks, and supports engagements of a broader range of threats. MMSP improves performance in littoral, ducted clutter environments, and in electronic attack (EA), and chaff environments and provides greater commonality in computer programs and equipment.[12][13] This will result in the merger with Aegis Ballistic Missile Defense System.[14]

There are some reports that Aegis radar systems on board some individual warships are not being maintained properly. A Navy panel headed by retired Vice Adm. Phillip Balisle has issued the "Balisle report," which asserts that over-emphasis on saving money, including cuts in crews and streamlined training and maintenance, has led to a drastic decline in readiness, and has left Aegis Combat Systems in low state of readiness.[15]

The biggest current blind spot for the ACS is underwater. Given the proliferation of ever more stealthy submarines this has become an issue of great concern for the US Navy.[16] 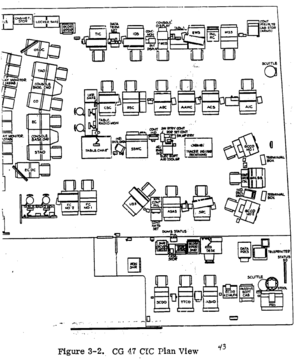 Layout of the Combat Information Center of early Aegis Cruisers.

The Aegis system was involved in a disaster in which USS Vincennes shot down Iran Air Flight 655 in 1988 resulting in 290 civilian deaths.

It was determined by a formal military investigation[17] that the Aegis system was completely operational and did not have any maintenance problems. The investigation ruled that if the commanding officer had relied on the complete tactical data displayed by the Aegis system the engagement might never have occurred. Additionally, psychological effects of the crew subconsciously manipulating the data to accord with a predefined scenario greatly contributed to the false identification. The investigation found that the Aegis Combat System did not contribute to the incident, but did aid in the investigation by means of recorded target data. The discrepancies are as follows:

Aegis in other navies 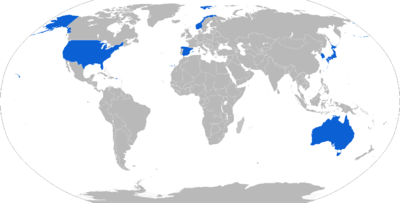 Map with Aegis operators in blue