Aelita (Russian: Аэли́та, pronounced [aɛˈlʲita]), also known as Aelita: Queen of Mars, is a silent film directed by Soviet filmmaker Yakov Protazanov made at the Mezhrabpom-Rus film studio and released in 1924. It was based on Alexei Tolstoy's novel of the same name. Mikhail Zharov and Igor Ilyinsky were cast in leading roles.

Though the main focus of the story is the daily lives of a small group of people during the post-war Soviet Union, the enduring importance of the film comes from its early science fiction elements. It primarily tells of a young man, Los (Russian: Лось, literally Elk), traveling to Mars in a rocket ship, where he leads a popular uprising against the ruling group of Elders, with the support of Queen Aelita who has fallen in love with him after watching him through a telescope. In it's performances in the cinemas in Leningrad, Dmitri Shostakovich played on the piano the music he provided for the film.

Moscow, 1921. A mysterious wireless message is received by various stations: its text is 'Anta Odeli Uta'. Someone facetiously suggests it has come from Mars, in order to tease Los (Nikolai Tsereteli), an engineer who is obsessed with the idea of going to Mars. This inspires him to daydream about Mars and a strange civilization there. We see Aelita (Yuliya Solntseva), the queen; Tuksib (Konstantin Eggert), the actual ruler; and Ilhoshka (Aleksandra Peregonets), Aelita's mischievous maid. They live in a society where aristocrats rule over slaves who are confined underground and put into cold storage when not required.

Los's wife Natasha (Valentina Kuindzhi) is pestered by Ehrlich (Pavel Pol), a bourgeoise playboy before the revolution who is now a dishonest minor official. He uses his connections to steal a large amount of sugar with the intention of selling it on the black market. Los, who has seen Erlich making up to Natasha but has not seen her rejecting him, becomes jealous.

Los continues to daydream: he imagines that Aelita has access to a telescope by which she can see people on Earth and has become attracted to him.

Spiridnov (Nikolai Tseretel again), an intellectual engineer and friend of Los's, is being quietly swindled by Ehrlich. He disappears; a would-be detective, Kratsov (Igor Ilyinsky) (who has been rejected by the police) suspects Spiridnov to be guilty of the theft of the sugar, because of his disappearance.

Los's jealousy gets out of control and he shoots Natasha: disguising himself as Spiridnov with a wig, false beard and glasses, he goes into hiding and makes plan to escape to Mars in a rocketship he has been constructing. A friend of his, Gussev (Nikolai Batalov), an ex-soldier, agrees to go with him. They take off, not knowing at first that Kratsov has stowed away (thinking he has been following Spiridnov and not realizing he's on a spaceship). Los confuses Kratsov by removing the disguise.

They land on Mars. Tuksub orders them killed, ignoring Aelita's pleas for their safety. Kratsov is taken before Tuksub and demands that the soldiers arrest the other two: he is promptly arrested. The chief astronomer comes to Aeilta and tells her where Los's ship has landed; she instructs her maid to kill him. The maid is arrested and sent to the slave's caves - Gussev, who has taken a fancy to her, follows.

Aelita and Los meet and fall in love, though Los occasionally sees her as Natasha (so do we). They are arrested and also sent to the caves.

Gussev tells the slaves of his own countries' revolution and foments a revolt, which Aelita takes command of. Tuksub is overthrown and the army sides with Aelita - she commands them to fire on the workers and herd them back to the caves - she intends to rule Mars herself. Disgusted, Los kills Aelita (seeing her as Natasha as he does so).

Suddenly back on Earth, it's clear that all this is a daydream. Erlich is arrested for the murder of Spiridnov. A poster on a wall advertises a make of tyres - 'Anta Odeli Uta': the wireless message had been an advertisement. Los had not injured or killed Natasha and they make up: he burns his spaceship plans and promises to stop daydreaming. 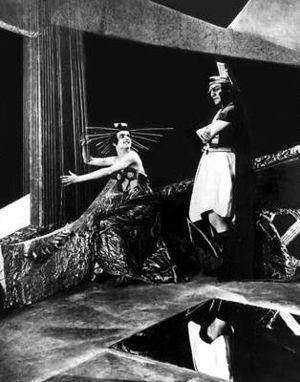 One of the earliest full-length films about space travel, the most notable part of the film remains its remarkable constructivist Martian sets and costumes designed by Aleksandra Ekster. Their influence can be seen in a number of later films, including the Flash Gordon serials and probably Fritz Lang's Metropolis and Woman in the Moon.

Parts of the plot were loosely adapted for the 1951 film Flight to Mars.

While very popular at first, the film later fell out of favor with the Soviet government and was thus very difficult to see until after the Cold War.

The 2004 DVD from Ruscico runs 104 min. and has a musical score based on the music of Scriabin, Stravinsky, and Glazunov.