Aermacchi was an Italian aircraft manufacturer. Formerly known as Aeronautica Macchi, the company was founded in 1912 by Giulio Macchi at Varese in north-western Lombardy as Nieuport-Macchi, to build Nieuport monoplanes under licence for the Italian military. With a factory located on the shores of Lake Varese, the firm originally manufactured a series of Nieuport designs, as well as seaplanes.

After the Second World War, the company began producing motorcycles as a way to fill the post-war need for cheap, efficient transportation.

The company later specialised in civil and military pilot training aircraft. In July 2003, Aermacchi was integrated into the Finmeccanica Group as Alenia Aermacchi, which increased its shareholding to 99%. 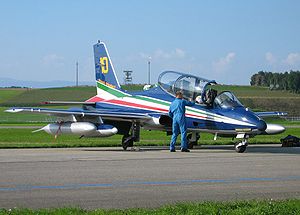 Since the beginning, the design and production of military trainers have been Alenia Aermacchi's core business.

Alenia Aermacchi takes part in the AMX program with Alenia Aeronautica and Embraer of Brazil with a total share of 24%. Alenia Aermacchi develops and manufactures the fuselage forward and rear sections and installs some avionic equipment in the aircraft. A Mid-Life Updating program is required by the Italian Air Force to upgrade the aircraft capabilities.

Alenia Aermacchi designs and produces wing pylons and wing tips, roots, trailing edges and flaps, which represents a 5% share in the overall program.

Alenia Aermacchi has a share of more than 4% in the Eurofighter program, for the design and development of wing pylons, twin missile and twin store carriers, ECM pods, carbon fiber structures and titanium engine cowlings.

After participating in the G-222 transport aircraft program, the company is involved in the new Military Transport Aircraft C-27J Spartan, for the production of outer wings.

Since the mid-1990s, Alenia Aermacchi has participated in programs for the supply of engine nacelles for civil aircraft. It produces cold parts for engine nacelles: inlets, fan cowls and EBU, the systems-to-engine interface. In 1999, the company established a joint venture (MHD) with Hurel-Dubois (presently Hurel-Hispano, of SNECMA group), a French company specializing in the development and manufacture of thrust reversers, to obtain the full responsibility for the development of nacelles installed on maximum 100-seat aircraft.