From Infogalactic: the planetary knowledge core
Jump to: navigation, search
This article is about an airline based in Bratsk. For the airport, see Bratsk Airport. 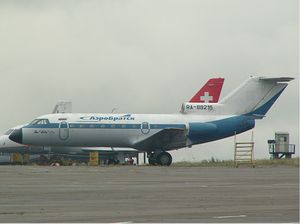 AeroBratsk was established in 1967. It was formerly the Aeroflot Bratsk Division, and was renamed Bratsk Avia following the collapse of the Soviet Union. The airline is owned by Rosimushchestvo (51%) and its employees (49%).[1] AeroBratsk was acquired by VIM Airlines at the end of 2004.[2]

AeroBratsk serves the following domestic scheduled destinations (as of 2 December 2009):[3]

The Aerobratsk fleet includes the following aircraft (at March 2010):[4]