Aeromist-Kharkiv (Ukrainian: Аероміст-Харків) or Aeromost-Kharkov (Russian: Аэромост-Харьков) was an airline headquartered in Kharkiv, Ukraine,[1] operating scheduled and chartered regional flights out of its base at Kharkiv International Airport using a fleet of up to three Antonov An-140 aircraft, the first ones of that type to enter commercial airline service (registered UR-14002, UR-14003 and UR-14004).[2] The company was established on 6 June 2002 under Pavel Naumenko's initiative (back then president of InterAMI).[3] It ceased to exist in June 2007 (at that time, the website was shut down).[4][5] 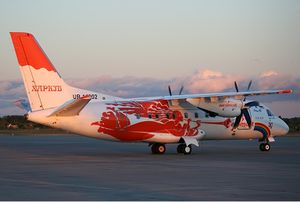 An Antonov An-140 of Aeromist at Gdańsk Lech Wałęsa Airport in 2005.

On 23 December 2003 at 19:29 local time, an Aeromist Antonov An-140 (registered UR-14003) crashed into a mountain near Isfahan, Iran, whilst approaching Isfahan International Airport in poor visibility conditions. The aircraft had been operating Flight 2137, a chartered service from Kharkiv to Isfahan with a refueling stop at Trabzon Airport, carrying 38 passengers (all of which were Antonov employees heading for a test flight of the HESA IrAn-140) and 6 crew members, none of which survived. It was later determined that the most probable reason for the crash was the flawed usage of the onboard GPS by the pilots. The accident marked the first, and to date the worst accident involving an aircraft of that type.[7]