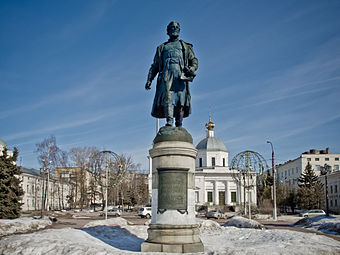 Statue of Afanasy Nikitin in Tver

Afanasy Nikitin (Афана́сий Ники́тин in Russian) (died 1472) was a Russian merchant and one of the first Europeans (after Niccolò de' Conti) to travel to and document his visit to India. He described his trip in a narrative known as The Journey Beyond Three Seas (Khozheniye za tri morya).

In 1466, Nikitin left his hometown of Tver on a commercial trip to India. He travelled down the Volga River, reached Derbent, then Baku and later Persia proper by crossing the Caspian Sea. He lived in Persia for one year. In the spring of 1469, Nikitin arrived at the city of Ormus and then, crossing the Arabian Sea, reached the sultanate of Bahmani, where he would live for 3 years. On his way back, Nikitin visited Muscat, the Arabian sultanate of Fartak, Somalia and Trabzon, and in 1472 arrived at Feodosiya by crossing the Black Sea. On his way to Tver, Nikitin died not far from Smolensk in the autumn of that year.

During his trip, Nikitin studied the population of India, its social system, government, military (he witnessed war-games featuring war elephants), its economy, religion, lifestyles, and natural resources. The abundance and trustworthiness of Nikitin's factual material provide a valuable source of information about India at that time.

1997 commemorative coin of Bank of Russia. Nikitin in Rus'

1997 commemorative coin of Bank of Russia. Nikitin in India

After studying Nikitin's account, and especially his references to Islam (at the time much of India was ruled by Muslim sultans and there were considerable numbers of Muslim merchants living along the coast), particularly the prayers he transliterates from Arabic and Turkic into Cyrillic letters, Gail Lenhoff and Janet Martin speculated that Nikitin might have converted to Islam while in India.[1]

His loss of contact with Christianity and his life among Muslims (and apparent lapse from Christianity and conversion to Islam) bothered him and he mentions this several times in his account. Indeed, he begins his account calling it his "sinful voyage beyond three seas." He went on to explain that, while he continued to date events by Christian religious holidays and invoked the Mother of God and the saints("the Holy Fathers"), he could not remember when Christian holidays were, so he could not celebrate Easter and other movable feast days or keep the Christian fasts (Lent, the St. Peters' Fast, the fast during Advent, etc.). Thus, he kept the fasts of the Muslims and broke fast when they did. He also wrote that at Bindar in the third year of his journey he "shed many tears for the Christian faith." Very near the end of his account, he wrote of his wish to return home and to the Christian faith: "I, Afanasy, a damned servant of Almighty God, Maker of heaven and earth, pondered over the Christian faith, the Baptism of Christ, the fasts established by the Holy Fathers, and the apostolic commandments, and I longed to go [back] to Rus!" [2]

Yakov Lurye, an editor of Nikitin's Journey, sees his conversion as doubtful, pointing out that a circumcised convert should be persecuted or even put to death in Rus', so if Nikitin had indeed become a Muslim, he would have avoided returning to his country, while in fact he died on his way back in Lithuania not far from the Muscovite border.[citation needed]

In 1955, the local authorities of Tver erected a bronze monument to Afanasy Nikitin on the bank of the Volga River. The sculptor was Sergei Orlov. There is a folk legend, that this statue was raised because Nikita Khrushchev upon visiting India, told Prime Minister Jawaharlal Nehru that there was a statue of Nikitin in Russia when in fact there was not (Nehru had asked if the Russians had honored the first Russian to visit India). So as not to be proven a liar, Khrushchev phoned back to Russia demanding that a statue of Nikitin be built immediately, before Nehru's state visit to Russia. The statue was featured on a Russian postage stamp in 2005 commemorating the 75th Anniversary of the establishment of the Tver region (oblast).[3] Nikitin was also featured on a coin commemorating the 525th anniversary of his journey.

In 1958, Mosfilm produced a film entitled The Journey Beyond Three Seas with Oleg Strizhenov cast as Afanasy Nikitin.

In 2000, a black obelisk was erected in Nikitin's honor at Revdanda, 120 km south of Mumbai, the probable location where he first set foot in India.

In 2006, the Indian organization "Adventures & Explorers," with the support of the Embassy of India in Moscow and the Tver Regional Administration sponsored the "Nikitin Expedition", in which 14 travellers set out from Tver to retrace Nikitin's journey through Russia, the Middle East, and Central Asia to India.[4] The expedition lasted from 12 November 2006 to 16 January 2007. The Indian national newspaper, The Hindu, filed several reports of the expedition's progress.[5] After reaching India, two members of the "Nikitin Expedition" set out in March 2007 from Mumbai (formerly known as Bombay) in SUVs to retrace Nikitin's travels around India itself. The Calcutta Telegraph filed a report on its progress in one of its March editions.[6]