Gap dynamics refers to the pattern of plant growth that occurs following the creation of a forest gap, a local area of natural disturbance that results in an opening in the canopy of a forest. Gap dynamics are a typical characteristic of both temperate and tropical forests and have a wide variety of causes and effects on forest life.

In areas of degraded soil

In some places, forests need help to reestablish themselves because of environmental factors. For example, in arid zones, once forest cover is destroyed, the land may dry and become inhospitable to new tree growth. Other factors include overgrazing by livestock, especially animals such as goats, cows, and over-harvesting of forest resources. Together these may lead to desertification and the loss of topsoil; without soil, forests cannot grow until the long process of soil creation has been completed - if erosion allows this. In some tropical areas, forest cover removal may result in a duricrust or duripan that effectively seal off the soil to water penetration and root growth. In many areas, reforestation is impossible because people are using the land. In other areas, mechanical breaking up of duripans or duricrusts is necessary, careful and continued watering may be essential, and special protection, such as fencing, may be needed.

Due to the extensive and ongoing Amazon deforestation of the last few decades,[4][page needed])

China has deforested most of its historically wooded areas. China reached the point where timber yields declined far below historic levels, due to over-harvesting of trees beyond sustainable yield.[5] Although it has set official goals for reforestation, these goals are set over an 80-years time horizon and have not been significantly met by 2008. China is trying to correct these problems by projects as the Green Wall of China, which aims to replant a great deal of forests and halt the expansion of the Gobi desert. A law promulgated in 1981 requires that every school student over the age of 11 plants at least one tree per year. As a result, China currently has the highest afforestation rate of any country or region in the world, with 47,000 square kilometers of afforestation in 2008.[6] However, the forest area per capita is still far lower than the international average.[7] There has also been considerable criticism regarding the effectiveness of planting so many trees especially in regions where they never grew prior. Studies reveal that the water table of those areas is becoming deeper indicating significant water loss.

India has witnessed a minor increase in the percentage of the land area under forest cover from 1950 to 2006. In 1950 around 40.48 million hectares was covered by forest. In 1980 it increased to 67.47 million hectares and in 2006 it was found to be 69 million hectares. 23% of India is covered by forest.[8] The forests of India are grouped into 5 major categories and 16 types based on biophysical criteria. 38% of forest is categorised as subtropical dry deciduous and 30% as tropical moist deciduous plus other smaller groups. It is taken care that only local species are planted in an area. Trees bearing fruits are preferred wherever possible due to their function as a food source.

Since the founding of the crown colony in the 19th century, afforestation has taken place to prevent soil erosion in the catchment areas of the reservoirs that were built. During the Japanese occupation in the Second World War, the countryside was deforested as the remaining population required fuel to survive. Most of the trees were cut down and extensive reafforestation was carried out after the war. Trees that were planted are mostly non-native species, such as: Pinus massoniana, Acacia confusa (Formosan acacia), Lophostemon confertus and the Paper Bark Tree.

Desertification is increasing along the Sahel, the strip of land between Africa's fertile tropics and the Sahara Desert. After a crippling famine in the 1970s caused by overgrazing and deforestation, a local community approach has been pioneered by Yacouba Sawadogo, a peasant farmer.[9] By replanting trees and crops together in holes filled with compost, whole villages have been able to move back to areas considered uninhabitable.

Iran is considered a low forest cover region of the world with present cover approximating seven percent of the land area. This is a value reduced by an estimated six million hectares of virgin forest, which includes oak, almond and pistachio.[10] Due to soil substrates, it is difficult to achieve afforestation on a large scale compared to other temperate areas endowed with more fertile and less rocky and arid soil conditions.[10] Consequently, most of the afforestation is conducted with non-native species,[10] leading to habitat destruction for native flora and fauna, and resulting in an accelerated loss of biodiversity.[4][page needed] 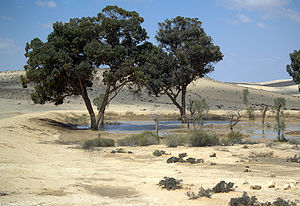 Tree-planting is an ancient Jewish tradition, mentioned in the Talmud as being more important than greeting the Messiah.[11] With over 240 million planted trees, Israel is one of only two countries that entered the 21st century with a net gain in the number of trees, due to massive afforestation efforts.[12] Israeli forests are the product of a major afforestation campaign by the Jewish National Fund (JNF).[13]

Critics argue that many JNF lands inside the West Bank were illegally confiscated from Palestinian refugees, and that the JNF furthermore should not be involved with lands in the West Bank.[14] Shaul Ephraim Cohen has claimed that trees have been planted to restrict Bedouin herding.[15] Susan Nathan wrote that forests were planted on the site of abandoned Arab villages after the 1948 war.[16]

Since 2009, the JNF has provided the Palestinian Authority with 3,000 tree seedlings for a forested area being developed on the edge of the new city of Rawabi, north of Ramallah.[17]

In North Africa, the Sahara Forest Project coupled with the Seawater greenhouse has been proposed. Some projects have also been launched in countries as Senegal to revert desertification. As of 2010, African leaders are discussing the combining of national resources to increase effectiveness.[18] In addition, other projects as the Keita Project in Niger have been launched in the past, and have been able to locally revert damage done by desertification. See Development aid#Effectiveness

Europe has deforested the majority of its historical forests. The European Union (EU) has paid farmers for afforestation since 1990, offering grants to turn farmland back into forest and payments for the management of forest. Between 1993 and 1997, EU afforestation policies made possible the re-forestation of over 5,000 square kilometres of land. A second program, running between 2000 and 2006, afforested more than 1000 square kilometres of land (precise statistics not yet available). A third such program began in 2007. Europe's forests are growing by 0.8 million ha a year thanks to these programmes.[19]

In Poland, the National Program of Afforestation was introduced by the government after World War II, when area of forests shrank to 20% of country's territory. Consequently, forested areas of Poland grew year by year, and on December 31, 2006, forests covered 29% of the country (see: Polish forests). It is planned that by 2050, forests will cover 33% of Poland.

In January 2013 the UK government set a target of 12% woodland cover in England by 2060, up from the then 10%.[23] Government-backed initiatives such as the Woodland Carbon Code are intended to support this objective by encouraging corporations and landowners to create new woodland to offset their carbon emissions.

In Adelaide, South Australia (a city of 1.3 million) Premier Mike Rann (2002 to 2011) launched an urban forest initiative in 2003 to plant 3 million native trees and shrubs by 2014 on 300 project sites across the metro area. The projects range from large habitat restoration projects to local biodiversity projects. Thousands of Adelaide citizens have participated in community planting days. Sites include parks, reserves, transport corridors, schools, water courses and coastline. Only trees native to the local area are planted to ensure genetic integrity. Premier Rann said the project aimed to beautify and cool the city and make it more liveable; improve air and water quality and reduce Adelaide's greenhouse gas emissions by 600,000 tonnes of C02 a year. He said it was also about creating and conserving habitat for wildlife and preventing species loss.[24]

The United States is roughly one-third covered in forest and woodland. Nevertheless, areas in the US were subject to significant tree planting. In the 1800s people moving westward encountered the Great Plains; land with fertile soil, a growing population and a demand for timber but with few trees to supply it. So tree planting was encouraged along homesteads. Arbor Day was founded in 1872 by Julius Sterling Morton in Nebraska City, Nebraska. By the 1930s the environmental disaster, the Dust Bowl signified a reason for significant tree cover. Public work's programs under the New Deal saw the planting of 18,000 miles of windbreaks stretching from North Dakota to Texas to fight soil erosion (see Great Plains Shelterbelt).

At their summit in Copenhagen in 2009, organised by the UK based The Climate Group, leaders of sub-national governments - States, Regions and Provinces - unanimously supported a recommendation by Premier Rann to plant 1 billion trees across their varied jurisdictions. The initiative was strongly supported by leaders present including Quebec Premier Jean Charest, California Governor Arnold Schwarzenegger and Scottish First Minister Alex Salmond. At a subsequent meeting in Rio de Janeiro in June 2012, The Climate Group announced that it had already received commitments by member governments to plant more than 500 million trees.[25]