Agriculture in the Soviet Union

Agriculture in the Soviet Union was the most inefficient sector of economy in the Soviet Union. A number of food taxes (prodrazverstka, prodnalog, others) were introduced despite the decree on Land. A system of state and collective farms, known as sovkhozes and kolkhozes placed rural population back into an inefficient system, where previously working farms were collectivized, causing massive disruption to the infrastructure that was in place. However, under the administration of Nikita Khrushchev, and after, a large number of reforms were placed to help defray the inefficiencies of the original agricultural system set in place by the administration of Lenin, most famously, the Virgin Lands Campaign.

Organized on a large scale and relatively highly mechanized, the Soviet Union was one of the world's leading producers of cereals, although bad harvests (as in 1972 and 1975) necessitated imports and slowed the economy. The 1976–1980 five-year plan shifted resources to agriculture, and 1978 saw a record harvest. Cotton, sugar beets, potatoes, and flax were also major crops. It was not really too a big surprise as the agriculture in the Russian Empire was traditionally amongst the highest producing in the world, while the social conditions since the October Revolution were hardly improved.

Despite immense land resources, extensive machinery and chemical industries, and a large rural work force, Soviet agriculture was relatively unproductive. Output was hampered in many areas by the climate (only 10% of the Soviet Union's land was arable) and poor worker productivity. Conditions were best in the temperate black earth belt stretching from Ukraine through southern Russia into the east, spanning the extreme southern portions of Siberia.

The term "Stalin's revolution" has been used for this transition, and that conveys well its violent, destructive, and utopian character.

After a grain crisis during 1928, Joseph Stalin established the USSR's system of state and collective farms when he moved to replace the New Economic Policy (NEP) with collective farming, which grouped peasants into collective farms (kolkhozy) and state farms (sovkhozy). These collective farms allowed for faster mechanization, and indeed, this period saw widespread use of farming machinery for the first time in many parts of the USSR, and a rapid recovery of agricultural outputs, which had been damaged by the Russian civil war. Both grain production, and the number of farm animals rose above pre-civil war levels by early 1931, before major famine undermined these initially good results.[1]

At the same time, individual farming and khutirs were liquidated through class discrimination identifying such elements as kulaks.[1] In the Soviet propaganda kulaks were portrayed as counterrevolutionaries and organizers of anti-Soviet protests and terrorist acts. In Ukraine the Turkic name "korkulu" was adopted, which meant "dangerous",.[2] The word itself is foreign to Ukraine. According to the Ukrainian Soviet Encyclopedia, struggle with kulaks in Ukraine was taking place more intensely than anywhere else in the Soviet Union.[2][3]

Coincidentally with the start of First "pyatiletka" (5 year plan), a new commissariat of the Soviet Union was created, better known as Narkomzem (People's Commissariat of Land Cultivation) led by Yakov Yakovlev. After the speech on collectivization that Stalin gave to the Communist Academy, there were no specific instructions on how exactly it had to be implemented, except for liquidation of kulaks as a class.[4] Stalin's revolution is often regarded as one of the factors which led to the Soviet famine of 1932–33 on a great scale, better known in Ukraine as Holodomor. Official Soviet sources blamed the famine on counterrevolutionary efforts by the Kulaks, though there is little evidence for this claim.[5][6][7] A plausible alternative explanation, supported by some historians, is that the famine occurred at least in part due to poor weather conditions and low harvests.[8][9][10] The famine started in Ukraine in the winter of 1931 and despite the lack of any official reports the news spread by word of mouth rapidly.[4] During that time restrictions on rail travel were set by authorities.[4] Only next year in 1932-33 the famine spread outside of Ukraine to agricultural regions of Russia and Kazakhstan, while the "news blackout continued".[4] The famine led to introduction of internal passport system due to unmanageable flow of migrants to the cities.[4] The famine finally ended in 1933, after a successful harvest.[8] Collectivization continued. During the second Five-Year plan Stalin came up with another famous slogan in 1935 "Life has become better, life has become more cheerful". Rationing was lifted.[4] However already in 1936 due to a poor harvest, fears of another famine led to famously long breadlines.,[4] however, no such famine occurred, and these fears proved largely unfounded. During the 1930s Aleksandr Zinoviev published his a benchmark book The Radiant Future.[4] Just before the fall of the Soviet Union, the phrase was often used rather in sarcastic connotation.[citation needed]

With adaptation of "cultural revolution" during the second Five-Year plan, there was introduction of fines that were collected from farmers. In her book "Everyday Stalinism" citing Siegelbaum's Stakhanovism, Fitzpatrick wrote: "...in a district in the Voronezh Region, one rural soviet chairman imposed fines on kolkhoz members totaling 60,000 rubles in 1935 and 1936: "He imposed the fines on any pretext and at his own discretion - for not showing up for work, for not attending literacy classes, for 'impolite language', for not having dogs tied up... Kolkhoznik M.A.Gorshkov was fined 25 rubles for the fact that 'in his hut the floors were not washed'".[4] 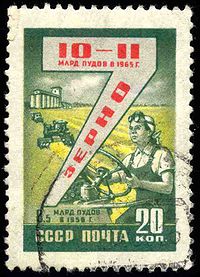 It had been the leaders' hope that the peasantry could be made to pay most of the costs of industrialization; the collectivization of peasant agriculture that accompanied the First Five-Year Plan was intended to achieve this effect by forcing peasants to accept low state prices for their goods.

Stalin's campaign of forced collectivization relied on a hukou system to keep farmers tied to the land. The collectivization was a major factor explaining the sector's poor performance. It has been referred to as a form of "neo-serfdom", in which the Communist bureaucracy replaced the former landowners.[11] In the new state and collective farms, outside directives failed to take local growing conditions into account, and peasants were often required to supply much of their produce for nominal payment.

Also, interference in the day-to-day affairs of peasant life often bred resentment and worker alienation across the countryside. The human toll was very large, with millions, perhaps as many as 5.3 million, dying from famine due largely to collectivisation, and much livestock was slaughtered by the peasants for their own consumption.[12] In the collective and state farms, low labor productivity was a consequence for the entire Soviet period.[13]

The sovkhozy tended to emphasize larger scale production than the kolkhozy and had the ability to specialize in certain crops. The government tended to supply them with better machinery and fertilizers. Labor productivity (and in turn incomes) tended to be greater on the sovkhozy. Workers in state farms received wages and social benefits, whereas those on the collective farms tended to receive a portion of the net income[citation needed] of their farm, based, in part, on the success of the harvest and their individual contribution.

The private plots were also an important source of income for rural households. In 1977, families of kolkhoz members obtained 72% of their meat, 76% of their eggs and most of their potatoes and eggs from private holdings. Surplus products, as well as surplus livestock, were sold to kolkhozy and sovkhozy and also to state consumer cooperatives. Statistics may actually under-represent the total contribution of private plots to Soviet agriculture.[14] The only time when private plots were completely banned was during collectivization, when famine took millions of lives.[15]

Although the Soviet Union was the world's second leading agricultural producer and ranked first in the production of numerous commodities, agriculture was a net drain on the economy.[citation needed]

Alexei Kosygin, the Chairman of the Council of Ministers, wanted to reorganize Soviet agriculture instead of increasing investments. He claimed that the main reason for inefficiency in the sector could be blamed on the sector's infrastructure.

The theory behind collectivization was that it would replace the small-scale unmechanized and inefficient farms that were then commonplace in the Soviet Union with large-scale mechanized farms that would produce food far more efficiently. Lenin saw private farming as a source of capitalist mentalities and hoped to replace farms with either sovkhozy which would make the farmers "proletarian" workers or kolkhozy which would at least be collective in nature. However, most observers say that despite isolated successes,[16] collective farms and sovkhozes were inefficient, the agricultural sector being weak throughout the history of the Soviet Union. [17]

Hedrick Smith wrote in The Russians (1976) that, according to Soviet statistics, one fourth of the value of agricultural production in 1973 was produced on the private plots peasants were allowed (2% of the whole arable land).[18] In the 1980s, 3% of the land was in private plots which produced more than a quarter of the total agricultural output.[19] i.e. private plots produced somewhere around 1600% and 1100% as much as common ownership plots in 1973 and 1980. Soviet figures claimed that the Soviets produced 20–25% as much as the U.S. per farmer in the 1980s.[20]

This was despite the fact that the Soviet Union had invested enormously to agriculture.[20] Production costs were very high, the Soviet Union had to import food, and it had widespread food shortages even though the country had a large share of the best agricultural soil in the world and a high land/population ratio.[20]

The claims of inefficiency have, however, been criticized by Economist Joseph E. Medley of the University of Southern Maine, US.[21] Statistics based on value rather than volume of production may give one view of reality, as public-sector food was heavily subsidized and sold at much lower prices than private-sector produce. In addition, the 2–3% of arable land allotted as private plots does not include the large area allocated to the peasants as pasturage for their private livestock; combined with land used to produce grain for fodder, the pasturage and the private plots total almost 20% of all Soviet farmland.[21] Private farming may also be relatively inefficient, taking roughly 40% of all agricultural labor to produce only 26% of all output by value. Another problem is these criticisms tend to discuss only a small number of consumer products and do not take into account the fact that the kolkhozy and sovkhozy produced mainly grain, cotton, flax, forage, seed, and other non-consumer goods with a relatively low value per unit area. This economist admits to some inefficiency in Soviet agriculture, but claims that the failure reported by most Western experts was a myth.[21] He believes the above criticisms to be ideological in nature and emphasizes "[t]he possibility that socialized agriculture may be able to make valuable contributions to improving human welfare". 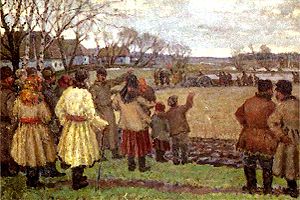 Soviet culture presented an agro-Romantic view of country life. After the fall of Soviet Union, it has been recreated tongue-in-cheek in the albums and videos of the Moldovan group Zdob şi Zdub.