Ahmed Ben Bella (Arabic: أحمد بن بلّة‎‎ Aḥmad bin Billah; 25 December 1916 – 11 April 2012) was an Algerian socialist soldier and revolutionary who was the first President of Algeria from 1963 to 1965.

Ben Bella was born in Maghnia in western Algeria,[3] during the height of the French colonial period on 25 December 1916.[4] He attended school in Tlemcen and was disturbed by the discrimination towards Arabs by his European teacher. He failed his brevet exam, and subsequently dropped out of school.

Ben Bella volunteered for service in the French Army in 1936. The Army was one of the few avenues of advancement for Algerians under colonial rule and voluntary enlistment was common. Posted to Marseille he played center mid-field for Olympique de Marseille in 1939–1940.[5] His only appearance for the club was in a game against FC Antibes in the Coupe de France on 29 April 1940 in Cannes.[6] He also scored a goal during the game.[7][8] The club officials offered him a professional spot on the team, but he rejected the offer. He also played for IRB Maghnia.[9]

Ben Bella's eldest brother had also served in the French Army during World War I and died of his wounds. Two other brothers died at young ages. In 1940 Ben Bella enlisted again and was awarded the Croix de guerre. He was demobilised after the fall of France but joined a regiment of Moroccan tirailleurs (infantry) with whom he saw service throughout the Italian campaign. Ben Bella was promoted to the rank of warrant officer and received the Médaille militaire for bravery at Monte Cassino from Charles de Gaulle.[10] He refused to accept an officer's commission after learning of the harsh French repression that followed a Muslim rising in the small Algerian town of Setif in May 1945. 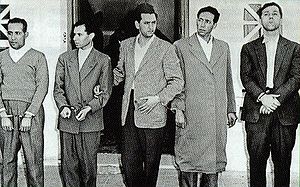 Ben Bella (right) after his arrest by the French army.

Following election as a municipal councillor, Ben Bella became a founding member of an underground organization pledged to fight colonial rule, known as the Organisation Spéciale. This was the immediate predecessor of the National Liberation Front. Arrested in 1951 and sentenced to eight years imprisonment Ben Bella escaped from Blida prison, making his way to Tunisia and then Egypt.

At the outbreak of the Algerian War in 1954, Ben Bella was based in Cairo where he had become one of the nine members of the Revolutionary Committee of Unity and Action which headed the Front de Liberation Nationale (FLN). He was arrested by the French in 1956, after his airplane had been controversially intercepted and brought to France, and released in 1962. His arrest led to the resignation of Alain Savary, opposed to Guy Mollet's policies. While in prison he was elected a vice-premier of the Algerian provisional government. When Egyptian President Gamal Abdel Nasser brought Ben Bella to speak for the first time to an Egyptian audience, he broke into tears because he could not speak standard Arabic. Like many Arab revolutionaries of the time, he would come to describe himself as a "Nasserist" and developed close ties to Egypt even before independence was achieved. Nasser's material, moral and political support of the Algerian movement would come to cause Nasser troubles, as it played a major role in France's choice to wage war on him during the 1956 Suez Crisis.

Due to Pakistan's support for the FLN, Ben Bella was given a Pakistani diplomatic passport to make his foreign travels possible in the face of the international manhunt for him undertaken by the French and their allies.[11][12][13][14] Ben Bella also traveled on a Pakistani diplomatic passport during the years of his exile from Algeria in 1980s.[13] 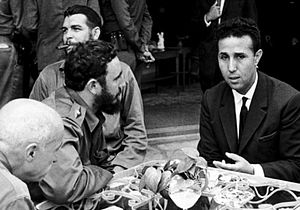 After Algeria's independence, Ben Bella quickly became more popular. In June 1962, he challenged the leadership of Premier Benyoucef Benkhedda; this led to several disputes among his rivals in the FLN, which were quickly suppressed by Ben Bella's rapidly growing number of supporters, most notably within the armed forces. By September, Bella was in control of Algeria in all but by name, and was elected as premier in a one-sided election on 20 September, which was recognized by the United States on 29 September. Algeria was admitted as the 109th member of the United Nations on 8 October 1962.

In 1963 he was elected President in an uncontested election, and also led Algeria's costly defense against the Moroccan invasion in the Sand War. After stabilizing the country, Ben Bella embarked on a series of popular but somewhat anarchic land reforms to the benefit of landless farmers, and increasingly turned to socialist rhetoric. His policy of Autogestion, or self-management, was adopted after the peasants seized former French lands. In balancing factions within the Algerian government, notably the FLN army, the former guerrillas and the state bureaucracy, his rule became increasingly autocratic. Eccentric and arrogant behavior towards colleagues is said to have alienated many former supporters, and, while he promoted the development of his own cult of personality, by 1964 he was dedicating more time to foreign affairs than local political developments. In 1965, Ben Bella was deposed in a bloodless military coup led by army strongman and close friend Houari Boumédiènne, and was placed under house arrest. In July 1979, shortly after Boumédiènne died, Ben Bella was released from house arrest. In 1980, he moved to France, but was expelled in 1983. He then moved to Lausanne, Switzerland, and launched the Le Mouvement pour la Démocratie en Algérie in 1984. In September 1990, he returned to Algeria and ran in the country's first multiparty election.[15]

Ben Bella was elected president of the International Campaign Against Aggression on Iraq at its Cairo Conference. He described himself numerous times in interviews as an Islamist of a "mild and peace loving flavour." Despite his former one-party state he later vocally advocated democracy in Algeria. He described the militant voice rising in the Islamic world as having developed from an incorrect and faulty interpretation of Islam. Despite the controversies, he was respected for his role in the anti-colonial struggle and was seen by many Arab intellectuals as one of the last original Arab nationalists.[original research?]

He was also the chairperson of the African Union Panel of the Wise, which is mandated to advise the AU Commission on issues relevant to conflict prevention, management and resolution. The other members of the panel at the time were: President Miguel Trovoada (former President of São Tomé and Príncipe); Dr. Salim A. Salim (former Secretary-General of the OAU); Dr. Brigalia Bam (Chair of South Africa's Electoral Commission); and Elisabeth Pognon (former President of the Constitutional Court of Benin).[original research?]

In February 2012, Ben Bella was admitted to a hospital for medical checks. At the same time, a report circulated that he had died, but this was denied by his family.[17]

Ben Bella died on 11 April at his family home in Algiers.[18] Though the reasons of his death were unknown he had been treated for respiratory illnesses twice at Ain Naadja. His body lay in state on 12 April before the funeral at El Alia Cemetery on 13 April. Algeria declared eight days of national mourning.[19]

Ben Bella was married to Zahra Sellami, a journalist. He had met her while he was under house arrest, when she came to his home to interview him. They became religiously observant Muslims, and adopted two daughters, Mehdia and Nouria.[15]