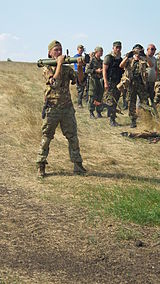 Aidar Battalion was a Territorial Defense Battalion of Ukraine, a volunteer military detachment of Ukraine's Ministry of Defense. The battalion took part in the war in Eastern Ukraine, and had roughly 400 members. The unit was known for links to the far-right.[3][4]

The battalion was formally disbanded on 2 March 2015 and reorganized as the 24th Separate Assault Battalion of the Ukrainian Army.[5][6][1]

Aidar was a Territorial Defense Battalion of Ukraine, the first of its kind to be established.[7] It was one of several volunteer battalions publicly supported by Ukrainian oligarch Ihor Kolomoyskyi.[8]

In the 2014 Ukrainian parliamentary election, former Aidar commander, Serhiy Melnychuk,[9] became a member of the Verkhovna Rada representing the Radical Party of Oleh Lyashko; he ranked third on the party's election list.[10][11] The commander of Aidar's second battalion, Ihor Lapin, is an MP for People's Front after winning a constituency seat in Lutsk in the same election.[12][13]

On 8 August 2014 Ukraine's Defense Minister Valeriy Heletey stated that the battalion would be reorganised, would receive better equipment and would see more combat missions.[14] Melnychuk has described that order as "criminal," but has admitted that most of Aidar's soldiers had demobilized or come under official control by 2015.[15]

Several dozen Aidar fighters were killed in an ambush south of Shchastya after the announcement of the ceasefire on 6 September 2014.[16]

Aidar was formally disbanded on 2 March 2015 "to prevent illegal actions of some representatives of volunteer units" (according to the General Staff of the Ukrainian Armed Forces).[1] After a "careful selection of soldiers"it was then reorganized as the 24th Separate Assault Battalion of the Ukrainian Army.[1] Lieutenant Colonel Yevhen Ptashnik was appointed as commander of the battalion.[1]

The Aidar Battalion consisted of volunteers from Lviv, Chernihiv, Luhansk, Kharkiv, Crimea, Kiev, Ivano-Frankivsk and Donetsk regions. It included a member of the Luhansk Oblast's legislature, a former mayor of Oleksandrivsk, and self-defense activists from the Euromaidan protests in Kiev.[17] In June 2014, it had around 400 members.[18]

The battalion had several subdivisions:

In July 2014, Russia began a criminal investigation of Aidar's commander, Serhiy Melnychuk, for "organizing the killing of civilians".[19] Its volunteer pilot, Nadiya Savchenko, was captured by pro-Russian separatists near Luhansk, transported to Russia and charged with killing two Russian journalists.[20][21]

On 24 December 2014, Amnesty International reported that the unit was blocking humanitarian aid from Ukraine reaching the population of the separatist-controlled areas. Over half the population in these areas depend on food aid. According to Amnesty International, the Aidar, Donbass and Dnipro-1 battalions say they are blocking the aid because they "believe food and clothing are ending up in the wrong hands and may be sold instead of being given as humanitarian aid."[22] Denis Krivosheev, acting Director of Europe and Central Asia for Amnesty International, stated that "Using starvation of civilians as a method of warfare is a war crime".[23]

In April 2015, the Ukrainian government appointed Governor of Luhansk Hennadiy Moskal stated that Aidar battalion was "terrorizing the region" and asked Ukrainian Defense Ministry to rein in its members after a series of thefts, including ambulances and the takeover of a bread factory.[24]