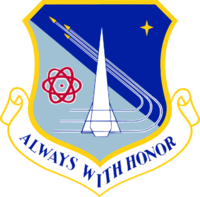 Officer Training School (OTS) is a United States Air Force commissioning program located at Maxwell Air Force Base in Montgomery, Alabama. It is the current de facto officer candidate school (OCS) program for the U.S. Air Force, analogous to the OCS programs operated by the other branches of the U.S. armed forces.

During peacetime, OTS is usually the smallest commissioning source in the USAF, producing fewer officers per year than AFROTC and the United States Air Force Academy (USAFA). Given its shorter lead time for officer production (10 weeks versus the typically 4-year pre-commissioning process for USAFA and AFROTC cadets), it is the commissioning source used to balance out USAF officer manning as deemed necessary by the Air Force.[citation needed] The number of officers commissioned through OTS fluctuates wildly as their numbers are largely influenced by the amount of graduating cadets through the Academy and AFROTC, as well as being the first place the Air Force cuts when they have a surplus of cadets through the other two sources. Given this reality, OTS has often surpassed USAFA officer production during wartime periods such as during the Vietnam War in the 1960s and early 1970s or the Reagan defense buildup of the 1980s.[citation needed] Conversely, OTS can be hard to get into during years of contraction within the national defense establishment in general and the Air Force in particular, such as the mid and late 1970s following the end of the Vietnam War and associated USAF force structure reductions or the post-Cold War era and its associated defense reductions of the early and mid-1990s.[citation needed] During these periods of contractions, OTS produces few officers, making selection for the OTS program particularly difficult and competitive for college graduates, especially those with no prior enlisted service, particularly USAF enlisted service.[citation needed]

Interested applicants for OTS typically contact Air Force recruiters. Recruiters will screen candidates, provide application details and schedule applicants for the Air Force Officer Qualifying Test (AFOQT). The AFOQT covers numerous test batteries assessing math, verbal, and analytical skills, as well as measuring pilot and navigator/combat systems officer potential for those applicants aspiring to be aeronautically rated officers. To have a reasonable chance at acceptance, either AFOQT scores, college GPA, or previous pilot skills (either as a civilian pilot and/or as a U.S. Army warrant officer/Army Aviator) must be noteworthy,[citation needed] although the selection process strives to employ a composite or "whole person" approach. Applicants will be given an opportunity to apply for Air Force career fields that correspond with the applicants' expertise and/or desires and will be interviewed by active Air Force officers as well as receive a military medical examination for flying or non-flying duty as appropriate. Applicants will then be screened by a centralized, periodic, OTS Selection Board conducted by the Air Force Recruiting Service, a component of the Air Education and Training Command.[3] Applicants will be notified of acceptance or rejection by their recruiter pending release of the board results. Selectees for OTS will subsequently enlist in the Air Force Reserve via the Delayed Enlistment Program and will be assigned an OTS class date. BOT is highly competitive, with recent boards (circa 2010 - 2012) having selection rates below twenty percent.[citation needed]

Per Air Force Instruction (AFI) 36-2013, personnel attending BOT must have a baccalaureate level degree or higher[4] in either technical or non-technical fields. Technical fields may include any ABET accredited Engineering degree and other fields in high demand by the Air Force. Non-technical degrees are more common, and therefore applying with a degree in such a field is very competitive. Applicants can apply for rated or non-rated positions. Rated positions are flying related -- Pilot, Combat Systems Officer, RPA Pilot, or Air Battle Manager. Non-rated fall into 2 categories: non-rated operations, such as Space & Missiles, Intelligence or Weather, and non-rated support, such as Aircraft Maintenance, Logistics, Civil Engineer, Security Forces, or Communications.

In 2014, OTS was transitioned to a nine-week course and the lower/upper class system was eliminated. Officer Trainees were also re-designated as cadets in 2015.

The first few weeks of training are geared toward orienting the cadet with Air Force standards. The focus is on physical training, drill and ceremonies, and academics. Cadets will be expected to work with their fellow flight and squadron members to accomplish specific tasks as required by their Flight Commander and Cadet Wing. They will also attend multiple classes in an academic environment. Later in the program they will attend field training exercises, projects, small arms training, and building team skills by overcoming challenges in a simulated deployment environment.

Upon graduation, OTS graduates receive Regular commissions as Second Lieutenants in the United States Air Force, either in pay grade O-1, or O-1E if prior enlisted for 4 years and 1 day or more in any branch of the U.S. armed forces.

COT is a 5-week course for professionals who have received a direct commission. Typically, these officers have degrees, such as M.Div., M.D., D.O., O.D., D.D.S., D.M.D., Pharm.D., Ph.D., Psy.D., B.S.N., MSW or J.D. in the case of chaplains, physicians, optometrists, dentists, pharmacists, psychologists, nurses, social workers, and lawyers, respectively. They often enter at an advanced rank, such as First Lieutenant (O-2) and sometimes as Captain (O-3) in compensation for their high level of education, and in some cases, experience. Officers can be commissioned up to the rank of Colonel (O-6) if they possess the level of experience necessary.

With the exception of those officers previously commissioned as line officers through USAFA, AFROTC, and the BOT program of OTS, or the Air Force Nurse program of AFROTC, most chaplains, judge advocate general (i.e., lawyers), and medical personnel go through COT.

The Academy of Military Science (AMS) is a detachment of the Air National Guard Readiness Center. Originally located at McGhee-Tyson Air National Guard Base in Knoxville, Tennessee, AMS relocated to Maxwell AFB in 2009, and embedded itself into OTS. AMS is a six-week program designed to train and commission second lieutenants to fulfill Air National Guard (ANG) requirements.

AMS was established in 1971 and has commissioned more than 14,500 officers. AMS production numbers have varied over the years, peaking at 569 in 2003. Currently, AMS has the capacity to produce 500 second lieutenants a year with a surge capacity of 560.

The AMS program covers the same subject areas as BOT and COT and also provides students education in ANG heritage and their role as Citizen Airmen, as the majority of AMS students are prior-enlisted Air National Guard members and many may also have civilian careers. The training program is accomplished in six weeks in order to support civilian employers by educating the Citizen Airman in the most efficient and effective way possible. There are four AMS classes per fiscal year.

Once AMS trainees successfully complete all OTS graduation requirements, they receive the oath of office and are commissioned as second lieutenants in the ANG with both state and federal responsibilities.

Most of these new lieutenants attend follow-on training after OTS. Training specialties include pilot, combat systems officer (formerly known as navigator), air battle management, space and missile operations, cyber operations, and several support career fields. The length of this training varies according to the specialty.[5]

The History of OTS

The film Wings Up (1943) helped promote the USAAF OCS

OTS was organized at Lackland AFB, Texas in November 1959, with the first OTS class (60-A) composed of 89 officer trainees, including 11 women, who graduated and were commissioned as 2nd Lieutenants on 9 February 1960. The number of OTS graduates has varied over the years, from 323 the first year to a high of 7,894 officers in 1967.[7]

With the establishment of OTS, Air Force OCS closed its doors and conducted its last graduation in June 1963. Concurrently, the Air Force also commenced a phaseout of its long-standing Aviation Cadet (AvCad) Program at Lackland AFB. Unlike OTS, AvCad was limited to pilot and navigator candidates. In addition, AvCads had to successfully complete either undergraduate pilot training or undergraduate navigator training before they could be commissioned as Second Lieutenants. The last AvCad pilot was commissioned in October 1961 at the former Reese AFB, Texas and the last AvCad navigator was commissioned in March 1965 at the former James Connally AFB, Texas.[8][9] OTS then became the sole organization for training future Air Force officers at Lackland AFB.

On 1 July 1993, Air Training Command (ATC) merged with Air University (AU) to form the new Air Education and Training Command (AETC), with Air University becoming a direct reporting unit (DRU) under AETC. OTS, which was formerly under ATC, and Air Force ROTC, which was formerly under AU, were then realigned under both AETC and AU. Until 22 September 1993, Officer Training School was located on the Medina Annex of Lackland AFB, Texas, graduating Class 93-06 on that date. During the spring and summer of 1993, OTS gradually relocated to Maxwell AFB, Alabama, commencing operations in interim facilities on 25 September 1993.[10]

Historically, Air Force ROTC had been headed by a major general or brigadier general, while OTS had been headed by a colonel. In February 1997, in an effort to reduce duplication of effort and streamline administrative and reporting procedures within AU, Air Force ROTC and Officer Training School realigned under a newly created umbrella organization, Air Force Officer Accession and Training Schools (AFOATS). Under this restructuring, OTS and AFROTC were placed under the leadership of individual colonels, while general officer oversight for both OTS and AFROTC, representing three-quarters of Air Force officer production, was placed under one command, the AFOATS commander, a brigadier general.[7]

In the late 1990s, a $52 million military construction (MILCON) project commenced to build a new, dedicated OTS campus at Maxwell AFB to replace the interim facilities initially occupied in late 1993. The majority of this MILCON project was completed in 2001 and all projects relating to the new-cum-current OTS campus were completed by 2004.[10] AFOATS was later renamed the Jeanne M. Holm Center for Officer Accession and Citizen Development.