The Salvadoran Air Force (Fuerza Aérea Salvadoreña) is the air force of the Armed Forces of El Salvador, and is independent from the army and navy.

The Salvadoran Army Air Force (Spanish: Fuerza Aérea de El Salvador) was formed on 20 March 1923 during a period of heavy interest in aviation in El Salvador. In 1947, after signing the treaty of Rio (which was a mutual defense treaty among the states of America including the U.S.), El Salvador with a US air mission and increased transfers of aircraft El Salvador built up a large force of aircraft.[clarification needed] 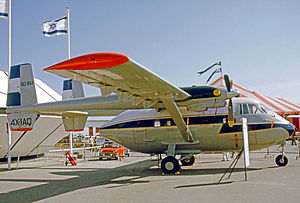 The Salvadoran Air Force first saw action in the 1969 Football war against Honduras equipped with F4U Corsairs and P-51 Mustangs. From the late 1970s, isolated guerilla actions rapidly developed into a civil war. US aid to El Savador in 1980 consisted of six UH-1Hs and four in 1981; they were used as gunships. Other deliveries brought that number of UH-1Hs in service up to 40. In February 1982 onwards the USA delivered eight A-37B Dragonflies, 12 UH-1Hs, four O-2As and three C-123Ks. On 6 May 2013, in celebration of the 189th anniversary of the Armed Forces of El Salvador, the Salvadoran Government announced the planned purchase of 10 A-37 aircraft from Chile.[1]

A four-engined Douglas DC-6B provided long-range logistical capability between 1975 and its retirement in 1998. It was used on supply flights to and from the United States.[2] In December 1984, two AC-47s were delivered to be in service with the other three C-47s in use. The civil war ended in mutual exhaustion in 1990 and the Air Force was geared for internal security. 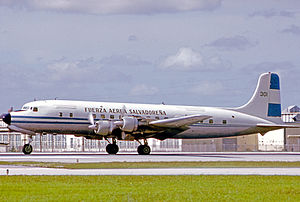