Air-independent propulsion (AIP) is any marine propulsion technology that allows a non-nuclear submarine to operate without access to atmospheric oxygen (by surfacing or using a snorkel). AIP can augment or replace the diesel-electric propulsion system of non-nuclear vessels.

AIP is usually implemented as an auxiliary source, with the traditional diesel engine handling surface propulsion. Most such systems generate electricity which in turn drives an electric motor for propulsion or recharges the boat's batteries. The submarine's electrical system is also used for providing "hotel services"—ventilation, lighting, heating etc.—although this consumes a small amount of power compared to that required for propulsion.

AIP can be retrofitted into existing submarine hulls by inserting an additional hull section. AIP does not normally provide the endurance or power to replace atmospheric dependent propulsion, but allows longer submergence than a conventionally propelled submarine. A typical conventional power plant provides 3 megawatts maximum, and an AIP source around 10% of that. A nuclear submarine's propulsion plant is usually much greater than 20 megawatts. 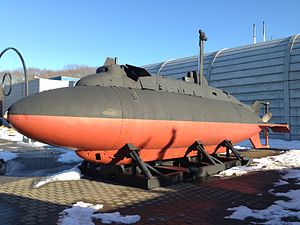 In 1867 Narcís Monturiol i Estarriol successfully developed a peroxide powered anaerobic or air independent steam engine.[3][4] In 1908 the Imperial Russian Navy launched the submarine Pochtovy which used a gasoline engine fed with compressed air and exhausted under water.

During World War II the German firm Walter experimented with submarines that used concentrated hydrogen peroxide as their source of oxygen under water. These used steam turbines, employing steam heated by burning diesel fuel in the steam/oxygen atmosphere created by the decomposition of hydrogen peroxide by a potassium permanganate catalyst.

Several experimental boats were produced, and one, U-1407, which had been scuttled at the end of World War II, was salvaged and recommissioned into the Royal Navy as HMS Meteorite. The British built two improved models in the late 1950s, HMS Explorer, and HMS Excalibur. Meteorite was not popular with its crews, who regarded it as dangerous and volatile; she was officially described as "75% safe". The reputations of Excalibur and Explorer were little better, the boats were nicknamed 'Excruciater' and 'Exploder'.

The Soviet Union also experimented with the technology and one experimental boat was built which utilized hydrogen peroxide in a Walter engine.

The USSR, UK, and US, the only countries known to be experimenting with the technology at that time, abandoned it when the latter developed a nuclear reactor small enough for submarine propulsion. Other nations, including Germany and Sweden, would later recommence AIP development.

It was retained for propelling torpedoes by the British and the Soviet Union, although hastily abandoned by the former following the HMS Sidon tragedy. Both this and the loss of the Russian Submarine Kursk were due to accidents involving hydrogen peroxide propelled torpedoes.

This technology uses a submarine diesel engine which can be operated conventionally on the surface, but which can also be provided with oxidant, usually stored as liquid oxygen, when submerged. Since the metal of an engine will burn in pure oxygen, the oxygen is usually diluted with recycled exhaust gas. Argon replaces exhaust gas when the engine is started.

During World War II the Kriegsmarine experimented with such a system as an alternative to the Walter peroxide system, including a variant of the Type XXVIIB Seehund midget submarine, the "Klein U-boot". It was powered by a 95 hp Diesel engine of a type commonly used by the Kriegsmarine and which was available in large numbers, supplied with oxygen from a tank in the boat's keel holding 1,250 litres at 4 atm (410 kPa). It was thought likely that the boat would have a maximum submerged speed of 12 kn (22 km/h; 14 mph) and a range of 70 mi (110 km), or 150 mi (240 km) at 7 kn (13 km/h; 8.1 mph).

The USSR built on the German work, developing the small 650 ton Quebec-class submarine of which thirty were built between 1953 and 1956. These had three diesel engines—two were conventional and one was closed cycle using liquid oxygen.

In the Soviet system, called a "single propulsion system", oxygen was added after the exhaust gases had been filtered through a lime-based chemical absorbent. The submarine could also run its diesel using a snorkel. The Quebec had three drive shafts: a 32D 900 bhp diesel on the centre shaft and two M-50P 700 bhp diesels on the outer shafts. In addition a 100 hp "creep" motor was coupled to the centre shaft. The boat could be run at slow speed using the centreline diesel only.[6]

Because liquid oxygen cannot be stored indefinitely, these boats could not operate far from a base. It was dangerous; at least seven submarines suffered explosions, and one of these, M-256, sank following an explosion and fire. They were sometimes nicknamed cigarette lighters. The last submarine using this technology was scrapped in the early 1970s.

The German Navy's former Type 205 submarine U1 was fitted with an experimental 3000 horsepower (2.2 MW) unit.

The French MESMA (Module d'Energie Sous-Marine Autonome) system is offered by French shipyard DCNS. MESMA is available for the Agosta 90B and Scorpène-class submarines. It is essentially a modified version of their nuclear propulsion system with heat generated by ethanol and oxygen. Specifically, a conventional steam turbine power plant is powered by steam generated from the combustion of ethanol (grain alcohol) and stored oxygen at a pressure of 60 atmospheres. This pressure-firing allows exhaust carbon dioxide to be expelled overboard at any depth without an exhaust compressor.

Each MESMA system costs around $50–60 million. As installed on the Scorpène, it requires adding an 8.3 meter (27 foot), 305 tonne hull section to the submarine, and results in a submarine able to operate for greater than 21 days underwater, depending on variables such as speed.[7][8]

An article in Undersea Warfare Magazine notes that: "although MESMA can provide higher output power than the other alternatives, its inherent efficiency is the lowest of the four AIP candidates, and its rate of oxygen consumption is correspondingly higher."[8]

The Swedish shipbuilder Kockums constructed three Gotland-class submarines for the Swedish Navy that are fitted with an auxiliary Stirling engine that burns liquid oxygen and diesel fuel to drive 75 kilowatt electrical generators for either propulsion or charging batteries. The endurance of the 1,500-tonne boats is around 14 days at 5 kn (5.8 mph; 9.3 km/h).

Kockums also delivered Stirling engines to Japan. New Japanese submarines will all be equipped with Stirling engines. The first submarine in the class, Sōryū, was launched on 5 December 2007 and were delivered to the navy in March 2009.

The new Swedish A26 submarine has the Stirling AIP system as its main energy source. The submerged endurance will be more than 18 days at 5 knots using AIP.

Siemens has developed a 30-50 kilowatt fuel cell unit. Nine of these units are incorporated into Howaldtswerke Deutsche Werft AG's 1,830t submarine U31, lead ship for the Type 212A class of the German Navy. The other boats of this class and HDW's AIP equipped export submarines (Dolphin class submarine, Type 209 mod and Type 214) use two 120 kW modules, also from Siemens.[9]

After the success of Howaldtswerke Deutsche Werft AG's in its export activities, several builders developed fuel-cell auxiliary units for submarines, but as of 2008 no other shipyard has a contract for a submarine so equipped.

The AIP implemented on the S-80 class of the Spanish Navy is based on a bioethanol-processor (provided by Hynergreen from Abengoa, SA) consisting of a reaction chamber and several intermediate Coprox reactors, that transform the BioEtOH into high purity hydrogen. The output feeds a series of fuel cells from UTC Power company (which also supplied fuel cells for the Space Shuttle).

The reformator is fed with bioethanol as fuel, and oxygen (stored as a liquid in a high pressure cryogenic tank), generating hydrogen as a sub-product. The produced hydrogen and more oxygen is fed to the fuel cells.[10]

Indian Defence Research and Development Organisation has developed an AIP system based on Phosphoric Acid Fuel Cell (PAFC) to power the last two Kalvari-class submarines which are based on the Scorpene-class submarine design.[11][12]

Air-independent propulsion is a term normally used in the context of improving the performance of conventionally propelled submarines. However, as an auxiliary power supply, nuclear power falls into the technical definition of AIP. For example, a proposal to use a small 200 kilowatt reactor for auxiliary power -styled by AECL as a "nuclear battery"- could improve the under-ice capability of Canadian submarines.[13][14]

Nuclear reactors have been used since the 1950s to power submarines. The first such submarine was USS Nautilus commissioned in 1954. Today, China, France, India, Russia, the United Kingdom and the United States are the only countries to have successfully built and operated nuclear-powered submarines.

As of 2015, some 8 nations are building AIP submarines with over 14 nations operating AIP based submarines: