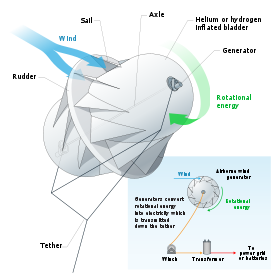 An airborne wind turbine is a design concept for a wind turbine with a rotor supported in the air without a tower,[1] thus benefiting from more mechanical and aerodynamic options, the higher velocity and persistence of wind at high altitudes, while avoiding the expense of tower construction,[2] or the need for slip rings or yaw mechanism. An electrical generator may be on the ground or airborne. Challenges include safely suspending and maintaining turbines hundreds of meters off the ground in high winds and storms, transferring the harvested and/or generated power back to earth, and interference with aviation[3]

Airborne wind turbines may operate in low or high altitudes; they are part of a wider class of airborne wind energy systems (AWES) addressed by high-altitude wind power and crosswind kite power. When the generator is on the ground,[4] then the tethered aircraft need not carry the generator mass or have a conductive tether. When the generator is aloft, then a conductive tether would be used to transmit energy to the ground or used aloft or beamed to receivers using microwave or laser. Kites and 'helicopters' come down when there is insufficient wind; kytoons and blimps resolve the matter. Also, bad weather such as lightning or thunderstorms, could temporarily suspend use of the machines, probably requiring them to be brought back down to the ground and covered. Some schemes require a long power cable and, if the turbine is high enough, a prohibited airspace zone. As of April 2014, no commercial airborne wind turbines are in regular operation.[5]

An aerodynamic airborne wind power system relies on the wind for support. 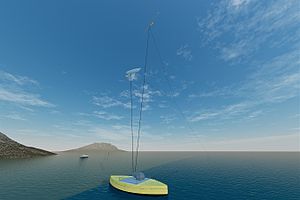 Miles L. Loyd proposed and analyzed an efficient AWES in his work "Crosswind Kite Power"[6] in 1980. Power output of AWES with crosswind wing motion is proportional to a square of a lift/drag ratio of the wing. Such AWES is based on the same aerodynamic principles as a conventional wind turbine (AWES), but it is more efficient because the air speed is constant along the wing span and the aerodynamic forces are resisted by tension of a tether, rather than by bending of a tower.

Bryan Roberts, a professor of engineering at the University of Technology, in Sydney, Australia, has proposed a helicopter-like craft which flies to 15,000 feet (4,600 m) altitude and stays there, held aloft by wings that generate lift from the wind, and held in place by a cable to a ground anchor. According to its designers, while some of the energy in the wind would be 'lost' on lift, the constant and potent winds would allow it to generate constant electricity. Since the winds usually blow horizontally, the turbines would be at an angle from the horizontal, catching winds while still generating lift. Deployment could be done by feeding electricity to the turbines, which would turn them into electric motors, lifting the structure into the sky.

The Dutch ex-astronaut and physicist Wubbo Ockels, working with the Delft University of Technology in the Netherlands, has designed and demonstrated[7] an airborne wind turbine he called a "Laddermill". It consists of an endless loop of kites. The kites lift up one end of the endless loop (the "ladder"), and the released energy is used to drive an electric generator.

A Sept'09 paper[8] from Carbon Tracking Ltd., Ireland has shown the capacity factor of a kite using ground-based generation to be 52.2%, which compares favorably with terrestrial wind-farm capacity factors of 30%.

A team from Worcester Polytechnic Institute in the United States has developed a smaller-scale[9] with an estimated output of about 1 kW. It uses a kiteboarding kite to induce a rocking motion in a pivoting beam.

The Kitegen uses a prototype vertical-axis wind turbine. It is an innovative plan (still in the construction phase) that consists of one wind farm with a vertical spin axis, and employs kites to exploit high-altitude winds. The Kite Wind Generator (KWG) or Kitegen is claimed to eliminate all the static and dynamic problems that prevent the increase of the power (in terms of dimensions) obtainable from the traditional horizontal-axis wind turbine generators. Generating equipment would remain on the ground, and only the airfoils are supported by the wind. Such a wind power plant would be capable of producing the energy equivalent to a nuclear plant, while using an area of few square kilometres, without occupying it exclusively. (The majority of this area can still be used for agriculture, or navigation in the case of an offshore installation.)

The Rotokite[10] is developed from Gianni Vergnano's idea. It uses aerodynamic profiles similar to kites that have been rotated on their own axis, emulating the performance of a propeller. The use of the rotation principle simplifies the problem of checking the flight of the kites and eliminates the difficulties due to the lengths of cables, enabling the production of wind energy at low cost. The Heli Wind Power is a project of Gianni Vergnano that uses a tethered kite.

The HAWE System [11] is developed from Tiago Pardal's idea. The System that consists in a Pumping Cycle similar to kite systems. In Generation Phase the pulling force increase 5-10 times due to Magnus Effect of a spinning cylinder(aerial platform), like a kite the pulling force produced by the aerial plaform will unwind the cable and generate electricity in the ground.In the Recovery Phase it rewinds the cable with no Magnus Effect in the aerial platform.

In August 2011 the German company SkySails, producer of kites for ship propulsion, announced a kite-based wind power system for on- and offshore applications that is supposed to be "30% cheaper than current offshore solutions".[12]

In May 2013, the Californian company Makani Power, developer of some crosswind hybrid kite systems with onboard generator doubling as motor, has been acquired by Google.[16]

In May 2013, an airborne wind energy system with a ground-based generator using fast motion transfer was suggested by L. Goldstein.[17]

In 2015, a sails on rope wind and ocean current energy system was invented by a Taiwanese Johnson Hsu.[1]

An aerostat-type wind power system relies at least in part on buoyancy to support the wind-collecting elements. Aerostats vary in their designs and resulting lift-over-drag aerodynamic characteristic; the kiting effect of higher lift-over-drag shapes for the aerostat can effectively keep an airborne turbine aloft; a variety of such kiting balloons were made famous in the kytoon by Domina C. Jalbert.

Balloons can be incorporated to keep systems up without wind, but balloons leak slowly and have to be resupplied with lifting gas, possibly patched as well. Very large, sun heated balloons may solve the helium or hydrogen leakage problems.

An Ontario based company called Magenn[20][21] is developing a turbine called the Magenn Air Rotor System (MARS). A future 1,000-foot (300 m)-wide MARS system would use a horizontal rotor in a helium suspended apparatus which is tethered to a transformer on the ground. Magenn claims that their technology provides high torque, low starting speeds, and superior overall efficiency thanks to its ability to deploy higher in comparison to non-aerial solutions.[22] The first prototypes were built by TCOM[who?] in April 2008. No production units have been delivered.[23]

Boston-based Altaeros Energies uses a helium-filled balloon shroud to lift a wind turbine into the air, transferring the resultant power down to a base station through the same cables used to control the shroud. A 35-foot prototype using a standard Skystream 2.5kW 3.7m wind turbine was flown and tested in 2012.[24] In fall 2013, Altaeros was at work on its first commercial-scale demonstration in Alaska.[25][26] 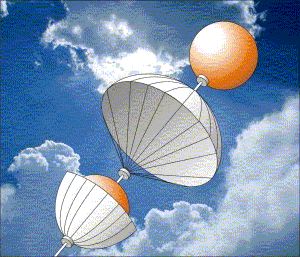 Concept drawing of the Twind technology.

The Twind Technology concept uses a pair of captive balloons at an altitude of 800 meters. The tether cables transmit force to a rotating platform on the ground. Each balloon has a sail connected to it. The two balloons move alternately, the balloon with the sail open moves downwind and draws the other balloon upwind, and then the motion reverses. The tether cable can be used to turn the shaft of a generator to produce electrical energy or perform other works (grinding, sawing, pumping).

Peer reviewed papers show that certain types of AWES can produce energy ten times cheaper than conventional wind turbines,[17][27] which is less than $0.02 per kWh.