The Airco DH.9 (from de Havilland 9) - also known after 1920 as the de Havilland DH.9 - was a British bomber used in the First World War. A single-engined biplane, it was a development of Airco's earlier, highly successful DH.4 and was ordered in very large numbers for Britain's Royal Flying Corps and Royal Air Force.

Its engine was unreliable, and failed to provide the expected power, giving the DH.9 poorer performance than the aircraft it was meant to replace, and resulting in heavy losses, particularly over the Western Front. The subsequently-developed DH.9A had a more powerful and reliable American Liberty L-12 engine.

The DH.9 was designed by de Havilland for the Aircraft Manufacturing Company in 1916 as a successor to the DH.4. It used the wings and tail unit of the DH.4 but had a new fuselage. This enabled the pilot to sit closer to the gunner/observer and away from the engine and fuel tank. The other major change from the DH.4 was the choice of the promising new BHP/Galloway Adriatic engine, which was predicted to produce 300 hp (224 kW) and so give the new aircraft an adequate performance to match enemy fighters.[1]

By this time, as a result of attacks by German bombers on London, the decision was made to almost double the size of the Royal Flying Corps, with most of the new squadrons planned to be equipped with bombers.[2] Based on the performance estimates for the DH.9 (which were expected to surpass those of the DH.4), and the similarity to the DH.4, which meant that it would be easy to convert production over to the new aircraft, massive orders (4,630 aircraft) were placed.

The prototype (a converted DH.4) first flew at Hendon in July 1917.[1] Unfortunately, the BHP engine proved unable to reliably deliver its expected power, with the engine being de-rated to 230 hp (186 kW) in order to improve reliability. This had a drastic effect on the aircraft's performance, especially at high altitude, with it being inferior to that of the DH.4 it was supposed to replace. This meant that the DH.9 would have to fight its way through enemy fighters, which could easily catch the DH.9 where the DH.4 could avoid many of these attacks.

While attempts were made to provide the DH.9 with an adequate engine, with aircraft being fitted with the Siddeley Puma, a lightened and supposedly more powerful version of the BHP, with the Fiat A12 engine and with a 430 hp (321 kW) Napier Lion engine, these were generally unsuccessful (although the Lion engined aircraft did set a World Altitude Record of 30,500 ft (13,900 m) on 2 January 1919[3]) and it required redesign into the DH.9A to transform the aircraft.

To boost the rate of production, quantity orders for the DH.9 were also placed with Alliance, G & J.Weir, Short Brothers, Vulcan, Waring & Gillow and National Aircraft Factories No. 1 and No. 2.

The first deliveries were made in November 1917 to 108 Squadron RFC and it first went into combat over France in March 1918 with 6 Squadron, and by July 1918 nine squadrons operational over the Western Front were using the type.

The DH.9's performance in action over the Western Front was a disaster, with heavy losses incurred, both due to its poor performance and to engine failures, despite the prior de-rating of its engine. Between May and November 1918, two squadrons on the Western Front (Nos. 99 and 104) lost 54 shot down, and another 94 written off in accidents.[4] Nevertheless, on 23 August 1918 a DH9 flown by Lieutenant Arthur Rowe Spurling of 49 Squadron, with his observer, Sergeant Frank Bell, single-handedly attacked thirty Fokker D.VII fighters, downing five of them.[citation needed] Captain John Stevenson Stubbs managed 11 aerial victories in a DH9, including the highly unusual feat of balloon busting with one.[5]

The DH.9 was also more successful against the Turkish forces in the Middle East, where they faced less opposition, and it was used extensively for coastal patrols, to try to deter the operations of U-boats.

Following the end of the First World War, DH.9s operated by 47 Squadron and 221 Squadron were sent to southern Russia in 1919 in support of the White Russian Army of General Denikin during the Russian Civil War.[6] The last combat use by the RAF was in support of the final campaign against Mohammed Abdullah Hassan (known by the British as the "Mad Mullah") in Somalia during January—February 1920.[6] Surprisingly, production was allowed to continue after the end of the war into 1919, with the DH.9 finally going out of service with the RAF in 1920.[7]

Following the end of the First World War, large number of surplus DH.9s became available at low prices and the type was widely exported (including aircraft donated to Commonwealth nations as part of the Imperial Gift programme.[3]

The South African Air Force received 48 DH.9s, and used them extensively, using them against the Rand Revolt in 1922. Several South African aircraft were re-engined with Bristol Jupiter radial engines as the M'pala, serving until 1937.[8] 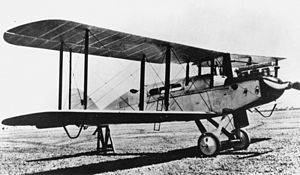 Because of the large number of surplus DH.9s available after the war many were used by air transport companies. They provided a useful load carrying capability and were cheap. Early air services between London, Paris and Amsterdam were operated by DH.9s owned by Aircraft Transport and Travel. A number of different conversions for civil use were carried out, both by Airco and its successor the de Havilland Aircraft Company and by other companies, such as the Aircraft Disposal Company.[9] Some radial powered DH.9Js continued in use until 1936.[10] 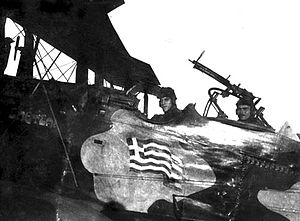 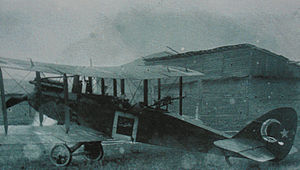 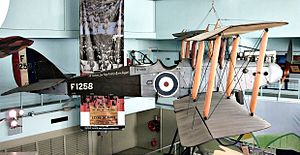 Of the thousands of DH.9s built, only a few have survived to be preserved. F1258 is displayed at the Musée de l'Air et de l'Espace in Paris,[18] with a second DH.9 being preserved at the South African National Museum of Military History,[19] while G-EAQM, the first single-engined aircraft to fly from the United Kingdom to Australia is preserved in the Australian War Memorial at Canberra.[20][21]

The remains of three DH.9s were discovered in India in 2000,[22] one of which is displayed at the Imperial War Museum Duxford, and another in the process of being restored to flying condition.[23] 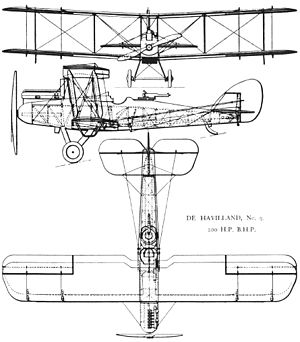