An airport lounge in the Adolfo Suárez Madrid–Barajas Airport

An airport lounge is a hospitality facility operated at many airports. Airport lounges offer, for selected passengers, comforts beyond those afforded in the airport terminal itself, such as more comfortable seating,[1][2] quieter environments, and often better access to customer service representatives. Other accommodations may include private meeting rooms, telephones,[1] wireless internet access[1][2] and other business services, along with provisions to enhance passenger comfort, such as free drinks and snacks.[1][2]

The American Airlines Admirals Club was the first airport lounge when it opened at New York City's La Guardia Airport in 1939. Then AA president C. R. Smith conceived it as a promotional tool.[3] 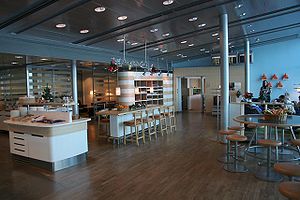 Airlines operate airline lounges as a service to premium passengers, usually those flying first and business class, and to very frequent fliers.

Airlines outside of North America and Australia generally do not sell lounge membership, instead reserving lounge access exclusively for very frequent flyers and passengers in premium cabins. However, if one has a lounge membership in an airline in one of the three major airline alliances (Oneworld, SkyTeam and Star Alliance), they may have access to the lounges of the other members of that alliance. For example, Qantas Club membership provides access to the Admirals Club lounges due to a reciprocal arrangement with American Airlines; a member of the United Club can access lounges of Air Canada and Air New Zealand, as can all Star Alliance members.

It is however not uncommon for non-alliance members to agree individually to allow usage of each other's lounges. Although Alaska Airlines operates just four Board Rooms, its members have access to American Airlines Admirals Club (and vice versa). Board Room members cannot, however, access the lounges of other Oneworld members, such as British Airways or Japan Airlines.

Private companies, such as Plaza Premium Lounge and Swissport, also operate generic pay-per-use lounges.[2] In contrast to airline lounges, these facilities are open to any traveller traversing the airport, regardless of class of ticket or airline, subject to payment of a fee.[2] Most only offer day passes, but some also offer yearly and lifetime memberships.[4][not in citation given] 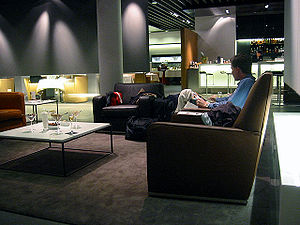 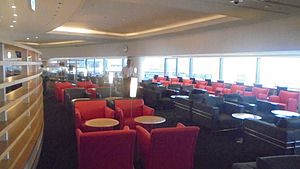 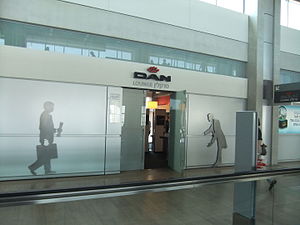 Access to airport lounges may be obtained in several ways.[6] In Australia, Canada, and the United States, a common method to gain access is by purchasing an annual or a lifetime membership, while in Asia and Europe this is usually impossible.[citation needed] Membership fees are sometimes discounted for elite members of an airline's frequent flyer program, and may often be paid using miles. Certain high-end credit cards associated with an airline, such as the Delta Reserve Credit Card and the United MilagePlus Club card, include membership to the lounges for as long as one owns the card.[7]

Lounge access can also be attained with an airline status card, which is common in Europe. The top frequent-flyer levels often offer access to any of an airline's lounges or partner airlines' lounges, when traveling in any class of travel on any of the partner airlines (usually it is required for the cardholder to be booked on one of the carrier's flights within the next 24 hours). Most airlines also usually offer free lounge access to anyone in their international or transcontinental premium cabins (first class or business class) on their days of travel.[citation needed]

Independent programs such as Priority Pass offer access to selected airline lounges for an annual fee, while Airport Angel, Red Dot Lounges and Go Simply offer prebookable access without need for membership. Premium credit and charge cards[8][9] such as Diners Club International, American Express Platinum and Centurion Card charge cards, and the Morgan Stanley i24 Card,[10][better source needed] offer lounge programs for members. As of 2008 the American Express Platinum (in some countries) and Centurion charge cards, Morgan Stanley i24 card and the RBS Black Card include Priority Pass membership.[citation needed] Some banks like HSBC now offer a lounge access program for premium clients.[citation needed] American Express also offers access to lounges belonging to Priority Pass and is expanding its own line of lounges.[11] 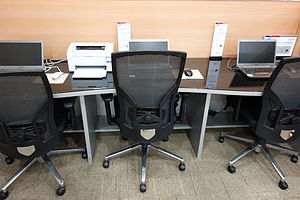 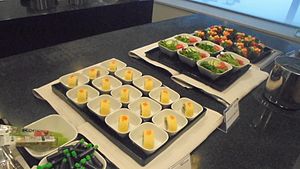 Besides offering more comfortable seating, lounges usually provide complimentary alcoholic and non-alcoholic beverages, and light snacks[1] such as fruit, cheese, soup, pastries and breakfast items.[citation needed] In the United States and Canada, nearly all domestic lounges offer an open bar for domestic beer, house wine and well liquor, with premium beverages such as imported beer, top-shelf liquor, high end wines and champagne available for purchase.[12][13] In US states where open bars are prohibited by law, non-premium beverages may be sold at a token rate (e.g. $1 per drink).[citation needed]

Some lounges have pool tables as amenities.[12][17]

There are wireless charging stations in lounges, at some airports in London, installed by Nokia.[18]