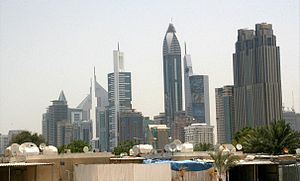 Satwa is the subject of the critically acclaimed spoken word piece/ photo-novella, Satwa stories, by Mahmoud Kaabour and Denise Holloway of Veritas Films. The project highlights the hidden gems and iconic characters of the Satwa neighborhood through poetry, photography, and music.[2]

With the announcement of Jumeirah Garden City, the survival of this community is bleak. If the project goes through, the community will be razed to make way for part of the new development. Some soil testing has already been done for a few of the proposed buildings, most notably EP 09 Towers and 1 Park Avenue.

Police in November 2013, also arrested a US citizen and some UAE citizens, in connection with a YouTube parody video which allegdly portrayed Dubai in bad light.[3] The parody video titled 'The Deadly Satwa GS' was shot in areas of Satwa and depicted gangs learning how to fight using simple weapons, including shoes, the aghal, etc.