Aspect is a graduate of the École Normale Supérieure de Cachan (ENS Cachan). He passed the 'agrégation' in physics in 1969 and received his master's degree from Université d'Orsay. He then did his national service, teaching for three years in Cameroon.

In the early 1980s, while working on his PhD thesis[5] from the lesser academic rank of lecturer, he performed the elusive "Bell test experiments" that showed that Albert Einstein, Boris Podolsky and Nathan Rosen's reductio ad absurdum of quantum mechanics, namely that it implied 'ghostly action at a distance', did in fact appear to be realised when two particles were separated by an arbitrarily large distance (see EPR paradox). A correlation between their wave functions remained, as they were once part of the same wave-function that was not disturbed before one of the child particles was measured.

If quantum theory is correct, the determination of an axis direction for the polarization measurement of one photon, forcing the wave function to 'collapse' onto that axis, will influence the measurement of its twin. This influence occurs despite any experimenters not knowing which axes have been chosen by their distant colleagues, and at distances that disallow any communication between the two photons, even at the speed of light.

Aspect's experiments, following the first experiment of Stuart Freedman and John Clauser in 1972, were considered to provide further support to the thesis that Bell's inequalities are violated in its CHSH version, in particular by closing a form of the locality loophole. However, his results were not completely conclusive, since there were so-called loopholes that allowed for alternative explanations that comply with local realism. See local hidden variable theory.

Stated more simply, the experiment provides strong evidence that a quantum event at one location can affect an event at another location without any obvious mechanism for communication between the two locations. This has been called "spooky action at a distance" by Einstein (who doubted the physical reality of this effect). However, these experiments do not allow faster-than-light communication, as the events themselves appear to be inherently random.

After his works on Bell's inequalites, he turned toward studies of laser cooling of neutral atoms and is now mostly involved in Bose–Einstein condensates related experiments. 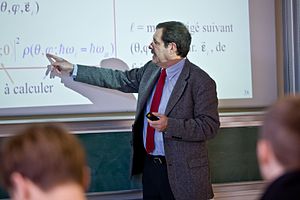 Alain Aspect at the École Polytechnique.

Aspect was deputy director of the French "grande école" SupOptique until 1994. He is a member of the French Academy of Sciences and French Academy of Technologies, and professor at the École Polytechnique. In 2005 he was awarded the gold medal of the Centre national de la recherche scientifique, where he is currently Research Director. The 2010 Wolf Prize in physics was awarded to Aspect, Anton Zeilinger and John Clauser. October 7, 2013, Aspect was awarded the Danish Niels Bohr International Gold Medal. In 2013 he was also awarded the Balzan Prize for Quantum Information Processing and Communication. 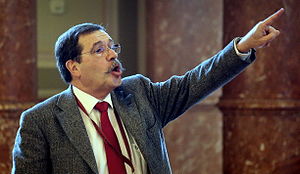 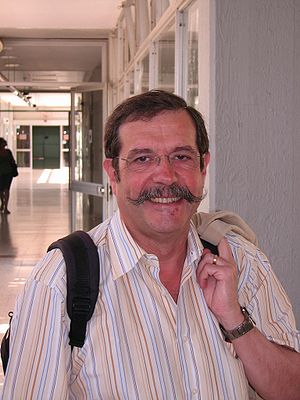 Alain Aspect on a visit to Tel Aviv University in 2010

Aspect was elected a Foreign Member of the Royal Society (ForMemRS) in 2015.[6] His certificate of election reads