The Alan Turing Year, 2012, marked the celebration of the life and scientific influence of Alan Turing during the Centenary of his birth on 23 June 1912. Turing had an important influence on computing, computer science, artificial intelligence, developmental biology, and the mathematical theory of computability and made important contributions to code-breaking during the Second World War. The Alan Turing Centenary Advisory committee (TCAC) was originally set up by Professor Barry Cooper[1] 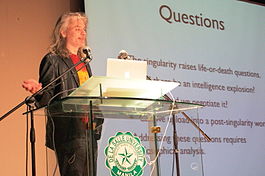 A number of major events took place throughout the year. Some of these were linked to places with special significance in Turing’s life, such as Cambridge University, the University of Manchester, Bletchley Park, Princeton University. The ACM was involved from June to September 2012. Twelve museums were involved including in Germany and Brazil. Artists, musicians and poets took part in the celebrations internationally.

The Turing Year was coordinated by the Turing Centenary Advisory Committee (TCAC), representing a range of expertise and organisational involvement in the 2012 celebrations. Members of TCAC include Honorary President, Sir John Dermot Turing; The Chair and founder of the committee, mathematician and author of Alan Turing - His Work and Impact S. Barry Cooper; Turing's biographer Andrew Hodges;[3] Wendy Hall, first person from outside North America elected President of the Association for Computing Machinery (ACM) in July 2008; Simon Singh;[4] Hugh Loebner sponsor of the Loebner Prize for Artificial Intelligence (annual science contest based on the famous Turing test) cyberneticist Kevin Warwick, author of 'March of the Machines' and 'I, Cyborg' , and committee member Daniela Derbyshire, who is also handling international co-ordination of marketing and publicity.

The Royal Mail issued a UK commemorative stamp for the Turing Centenary.

Alan Turing: "I am building a brain." Half a century later, its successor beat Kasparov S Barry Cooper The Guardian, Mon 14 May 2012

The other Turing test: Codebreaker's beloved Monopoly pays him the ultimate compliment The Independent, Sat 8 September 2012

How did the leopard get its spots? Codebreaker Alan Turing was right all along The Daily Telegraph

Barry Cooper was interviewed on BBC 3 Counties Radio and Sky News in relation to the pardon of Alan Turing on December 24, 2013.