The Alaska House of Representatives is the lower house in the Alaska Legislature, the state legislature of the U.S. state of Alaska. The House is composed of 40 members, each of whom represents a district of approximately 17,756 people per 2010 Census figures. Members serve two-year terms without term limits. With 40 representatives, the Alaska House is the smallest state legislative lower house in the United States.

The House convenes at the State Capitol in Juneau.

Bills are introduced and read the first time with the number, sponsor or sponsors, and the title of the bill and then referred to a committee(s).[1] Committee chairs can choose whether or not hear a bill and committees can vote to approve a bill in its original form or make modifications through a committee substitute.[1] Once bills or substitutes are approved, the legislation is referred to the next committee of assignment or to the Rules Committee, which can further amend the bill or assign it to the daily floor calendar.[1]

Once a bill is scheduled on the floor, it appears on the calendar in Second Reading. The bill is again read by number, sponsor or sponsors, and title along with the standing committee reports. A motion is made on the floor to adopt any committee substitutes.[1] Amendments can also be offered and voted on.[1] Third Reading is where the motion is made to vote on the bill.[1]

When a bill is not modified in the second house, it can be sent to the governor on Third Reading, through enrollment. If the bill is modified, the house of origin must vote to accept or reject amendments by the opposite house. A Fourth Reading, in the case of acceptance, will send the bill to the governor, through enrollment. If amendments are rejected, the bill can be sent to conference, where members of the Senate and House hash out a final version and send it to a Fourth Reading in both houses.[1]

State representatives must be a qualified voter and resident of Alaska for no less than three years, and a resident of the district from which elected for one year immediately preceding filing for office.[2] A state representative must be 21 years of age at the time the oath of office is taken.[2] The Alaska House of Representatives may expel a member with the concurrence of two-thirds of the membership of the house.[2] 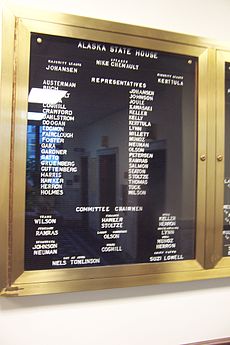 House of Representatives member directory in the State Capitol as it appeared in 2009.

The Speaker of the House presides over the House of Representatives. The Speaker is elected by the majority party caucus followed by confirmation of the full House through the passage of a House Resolution. In addition to presiding over the body, the Speaker is also the chief leadership position, and controls the flow of legislation and committee assignments. Other House leaders, such as the majority and minority leaders, are elected by their respective party caucuses relative to their party's strength in the chamber.

At the start of the 29th Alaska Legislature in 2015, four Democrats (Edgmon, Herron, Foster, and Nageak) caucus with the Republican-led majority and one independent (Ortiz) caucuses with the Democratic-led minority.