The Alaska Legislature meets in the Alaska State Capitol building in Juneau, Alaska.

Unlike other state legislatures with longer sessions, the comparatively short Alaska Legislature session allows many lawmakers to retain outside employment, especially in the state's many seasonal industries, such as fishing and tourism. In this, the Alaska Legislature retains some of the volunteer nature that characterized most state legislatures until the middle of the 20th century. This has led to recurring but minor controversy around the potential for conflict of interest inherent in legislators' outside employment.[2] 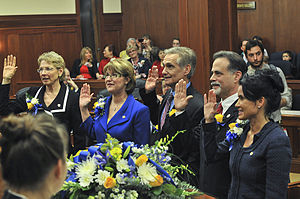 The swearing-in ceremony for the 28th Alaska Legislature.

Candidates for legislative office must be a qualified voter and resident of Alaska for no less than three years, and a resident of the district from which elected for one year immediately preceding filing for office.[3] A senator must be at least 25 years old and representative 21 years of age at the time the oath of office is taken.[3]

Each chamber of the legislature may expel a member with the concurrence of two-thirds of the membership of the house.[3] This has happened only once in the legislature's history. On February 5, 1982, the Alaska Senate of the 12th Legislature expelled Bethel senator George Hohman from the body. Hohman was convicted of bribery in conjunction with his legislative duties on December 24, 1981, and had defiantly refused to resign from his seat. Expulsion was unnecessary during the more recent Alaska political corruption probe, as legislators targeted by the probe resigned, lost renomination or re-election, or did not seek re-election.

The Alaska Constitution gives the legislature the authority to set the term start date. Legislative terms begin on the second Monday in January following a presidential election year and on the third Tuesday in January following a gubanatorial election.[4] The term of representatives shall be two years, and the term of senators, four years. One-half of the senators shall be elected every two years.[4]

In the 2006 elections, a voter initiative was passed that reduced the statutory length of the session from 121 days to 90 days. The 2008 session was the first 90-day session. Although the session adjourned on time, opponents of the shorter session claimed that legislation was rushed and public input was jeopardized.[5]

During session, bills are introduced and read the first time with the number, sponsor or sponsors, and the title of the bill and then referred to a committee or multiple committees.[6] Both chambers have the following committees: Finance; Health, Education and Social Services; Judiciary; Labor and Commerce; Community and Regional Affairs; Resources; Rules; State Affairs and Transportation and any subcommittees created by committee chairs.[6]

Committee chairs can choose whether or not hear a bill and committees can vote to approve a bill in its original form or make modifications through a committee substitute.[6] Once bills or substitutes are approved, the legislation is referred to the next committee of assignment or to the Rules Committee, which can further amend the bill or assign it to the chamber's daily calendar.[6]

Once the Rules Committee has scheduled a bill on the chamber floor, it appears on the calendar in Second Reading. The bill is again read by number, sponsor or sponsors, and title along with the standing committee reports. A motion is made on the floor to adopt any committee substitutes.[6] Amendments can also be offered and voted on.[6] Third Reading is where the motion is made to vote on the bill.[6]

After final passage in either the Alaska House of Representatives or Alaska Senate, a bill is engrossed and sent to the opposite house to go through the same process of introduction, committee referral and three readings.[6]

When a bill is not modified in the second house, that house can send it to the governor on Third Reading, through enrollment. If the bill is modified, the house of origin must vote to accept or reject amendments by the opposite house. A Fourth Reading, in the case of acceptance, will send the bill to the governor, through enrollment. If amendments are rejected, the bill can be sent to conference, where members of the Senate and House hash out a final version and send it to a Fourth Reading in both houses.[6]

The governor can choose to sign or veto the legislation. In the case of the veto, a two-third majority can override the veto. If signed or approved by a veto override, the legislation becomes law.[6] Unlike in many states, the governor does not have the power of the pocket veto.[7]

Unlike many other state legislative chambers in the United States, both houses of the Alaska Legislature have a longstanding tradition of majority caucuses encompassing members of both major parties (Republican and Democratic). Democrats caucusing with the majority are colloquially known as "Bush Democrats", a reference to the Alaskan bush country from which they typically hail.[8][9] Members of the minority party caucusing with the majority are treated as members of the majority for purposes of committee assignments and caucus meetings.