The Albanian Air Force (Forca Ajrore Shqiptare, FASH) is the national Air Force of the Albanian military. The headquarters is located in Tirana and it operates two airbases, Kuçova Air Base and Tirana Air Base.[1]

Military aviation started in Albania in 1914, when the Albanian government ordered three Lohner Daimler aircraft from Austria to form the Royal Albanian Air Corps. As a result of the outbreak of World War I, the order was cancelled. Albania did not have the resources to restart the development of a proper Air Force during the 1920s and 1930s.

After World War II, the Albanian Air Force finally came into existence when Albania was equipped with Soviet aircraft. The first squadron was equipped with Yakovlev Yak-9s. The first jet fighter to enter service was the MiG-15, dating officially the 15th of May 1955, followed by the MiG-17. Some of the MiG-15s were Soviet fighters used and then withdrawn from the North Korean Air Force. The backbone of the Albanian Air Force jet fighters became MiG-19 (NATO code "Farmer"). 12 MiG-19PM were delivered by the USSR in October 1959 and on the same year pilots and specialists were sent in USSR to train with the all-weather interceptor MiG-19 PM. After the collapse of USSR-Albanian relations, significant numbers of Shenyang J-6 fighters (Chinese copy of the MiG-19S), were acquired from China. In the early 1970s, Albania exchanged its lot of Soviet-made MiG-19PM (NATO code "Farmer-E") fighters equipped for beam-riding missiles, with 12, more advanced, Chengdu J-7A fighters (Chinese copy of the Soviet-built MiG-21). Two of them were lost in incidents in the early 1970s, eight had problems with lack of batteries in the early 1980s.

In total, during the 70s and early 80s, the Albanian Air Force was able to deploy 142 airplanes, between Shenyang J-6Cs, 12 Chengdu J-7As, a fighting squadron equipped with MiG-17s, a considerable number of MiG-15 (both BIS and UTI versions), and 4 Soviet-made Il-14 transport aircraft. A squadron of Shijiazhuang Y-5 was deployed in Tirana and the Air Force Academy in Vlora had 2 squadrons of Yak-18 for basic pilot training purposes. The helicopter component consisted in 18 Harbin Z-5 (Chinese copy of Mil Mi-4) helicopters based in Farka Tirana, meanwhile there was a single prototype of a light H-5 bomber based in Rinas.

Due to relations collapse between Albania and the Chinese, maintenance became extremely difficult and the number of deadly incidents involving Mikoyan fighters increased. Despite Albanian efforts and some initial success in repairing the engines of the MiGs, the lack of specific jet fuel forced authorities to start production in a national scale, thus resulting in a low-quality production (The first attempt dates on 1961, when the Kuçova factory produced the special Jet kerosene called TSI). The fuel conditioned the life-time of the jet engines and often was blamed as the main reason of the deadly incidents (35 Albanian pilots lost their life from 1955 to 2005 mainly due to MiG's mechanical failures). In the early 90s, in an effort to keep the MiGs flying, the Albanian Air Force received spare parts from Bulgaria and engines from the ex-GDR. As of 2004, Albania still had 117 J-6C aircraft, although mostly were not operational and only 12 Chengdu J-7A.[2] The Albanian fighter jets were definitively withdrawn from active service in late 2004 after the last deadly incident involving a J-6C during take-off from the military area at Mother Teresa Airport in Tirana. Currently, the Albanian Air Brigade does not operate any old Soviet aircraft. Since 2011, 9 Shijiazhuang Y-5 are retired from service.

The Albanian Air Force has retired all its fixed wing aircraft and now operates several types of helicopters. Also, close NATO Integration Air defense is no longer a priority for the Albanian military. 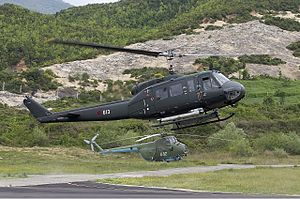 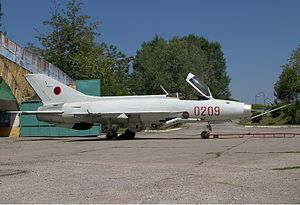 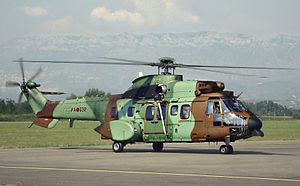 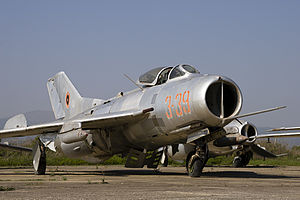 A retired F6 at Kuçovë Air Base

All Albanian fixed-wing aircraft were withdrawn from active service in 2005.

Deployment of the Albanian Air Force until 2005