From Infogalactic: the planetary knowledge core
Jump to: navigation, search
For other uses, see Alder (disambiguation).

Alder is the common name of a genus of flowering plants (Alnus) belonging to the birch family Betulaceae. The genus comprises about 30 species of monoecious trees and shrubs, a few reaching a large size, distributed throughout the north temperate zone with a few species extending into Central America and the northern Andes.[1]

The common name alder evolved from Old English alor, which in turn is derived from Proto-Germanic root[2] aliso. The generic name Alnus is the equivalent Latin name. Both the Latin and the Germanic words derive from the Proto-Indo-European root el-, meaning "red" or "brown", which is also a root for the English words elk and another tree: elm, a tree distantly related to the alders.[3]

With a few exceptions, alders are deciduous, and the leaves are alternate, simple, and serrated. The flowers are catkins with elongate male catkins on the same plant as shorter female catkins, often before leaves appear; they are mainly wind-pollinated, but also visited by bees to a small extent. These trees differ from the birches (Betula, the other genus in the family) in that the female catkins are woody and do not disintegrate at maturity, opening to release the seeds in a similar manner to many conifer cones.

The largest species are red alder (A. rubra) on the west coast of North America, and black alder (A. glutinosa), native to most of Europe and widely introduced elsewhere, both reaching over 30 m. By contrast, the widespread Alnus viridis (green alder) is rarely more than a 5-m-tall shrub.

Alder leaves and sometimes catkins are used as food by numerous butterflies and moths.

A. glutinosa and A. viridis are classed as environmental weeds in New Zealand.[4]

Alder is particularly noted for its important symbiotic relationship with Frankia alni, an actinomycete, filamentous, nitrogen-fixing bacterium. This bacterium is found in root nodules, which may be as large as a human fist, with many small lobes, and light brown in colour. The bacterium absorbs nitrogen from the air and makes it available to the tree. Alder, in turn, provides the bacterium with sugars, which it produces through photosynthesis. As a result of this mutually beneficial relationship, alder improves the fertility of the soil where it grows, and as a pioneer species, it helps provide additional nitrogen for the successional species which follow. 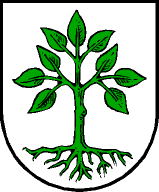 The catkins of some alder species have a degree of edibility,[5] and may be rich in protein. Reported to have a bitter and unpleasant taste, they are more useful for survival purposes. The wood of certain alder species is often used to smoke various food items such as coffee, salmon and other seafood.

Most of the pilings that form the foundation of Venice were made from alder trees.[6]

Alder bark contains the anti-inflammatory salicin, which is metabolized into salicylic acid in the body.[7] Some Native American cultures use red alder bark (Alnus rubra) to treat poison oak, insect bites, and skin irritations. Blackfeet Indians have traditionally used an infusion made from the bark of red alder to treat lymphatic disorders and tuberculosis. Recent clinical studies have verified that red alder contains betulin and lupeol, compounds shown to be effective against a variety of tumors.[8]

The inner bark of the alder, as well as red osier dogwood, or chokecherry, is used by some Indigenous peoples of the Americas in smoking mixtures, known as kinnikinnick, to improve the taste of the bearberry leaf.[9]

Alder is illustrated in the coat of arms for the Austrian town of Grossarl.

Electric guitars, most notably the Fender Jazz Bass, Fender Precision Bass, Fender Stratocaster and Fender Telecaster, have been built with alder bodies since the 1950s. Alder is appreciated for its claimed tight and even balanced tone, especially when compared to mahogany, and has been adopted by many electric guitar manufacturers.

Alder bark and wood (like oak and sweet chestnut) contain tannin and are traditionally used to tan leather.

A red dye can also be extracted from the outer bark, and a yellow dye from the inner bark.[10]

The genus is divided into three subgenera:

Subgenus Alnus: Trees with stalked shoot buds, male and female catkins produced in autumn (fall) but stay closed over winter, pollinating in late winter or early spring, about 15–25 species, including: 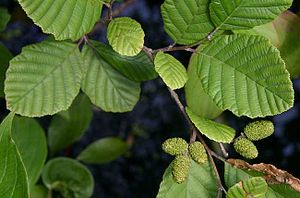 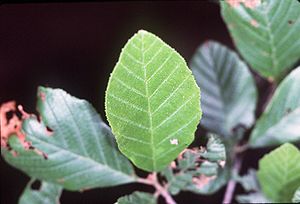 Leaves of the tag alder

Subgenus Alnobetula. Shrubs with shoot buds not stalked, male and female catkins produced in late spring (after leaves appear) and expanding and pollinating then, one to four species: 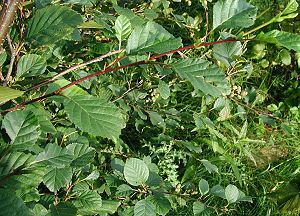