From Infogalactic: the planetary knowledge core
Jump to: navigation, search
This article is about the Russian car. For the opera by Rachmaninoff, see Aleko (Rachmaninoff).

The Moskvitch-2141, also known under the trade name Aleko (Russian: "АЛЕКО", derivative from the name of the automaker "Автомобильный завод имени Ленинского Комсомола", Avtomobilnyi zavod imeni Leninskogo Komsomola, meaning "Automotive Factory of Lenin's Komsomol"), is a Russian mid-size car that was first announced in 1985 and sold in the Soviet Union and its successor states between 1986 and 1997 by the now non-existent Moskvitch Company, based in Moscow, Russia. It was replaced by the modernised M-2141-02 Svyatogor and its sedan body version, the M-2142, in 1997–2003.

The Aleko was a huge improvement over previous Moskvitch models, which were durable but old-fashioned saloons and station wagons (estates) with rear-wheel drive and a solid rear axle, and had no common parts with them apart from the engine and some other minor details.

The new car had such innovative features as front-wheel drive, a hatchback body style, MacPherson strut front suspension and torsion-crank rear suspension. It had rack-and-pinion steering and a collapsible steering column. The spare tyre was located underneath the boot and was accessible from outside, in the tradition of French cars. The wheelbase went up almost 20 centimetres (7.9 in), the body got 14 centimetres (5.5 in) wider, the wheel size went up one inch (14 inches). The car became more spacious, comfortable and safe. For the first time in the history of Soviet and Russian car making, the car's profile was optimized for aerodynamics, with the help of Russian and, partially, French engineers, who shortly cooperated with them at the final stage of the development process. The officially reported drag coefficient was 0.35.[2]

Before the development of the M-2141 started, Moskvitch engineers had been working on a new series of rear-wheel drive cars and had developed it to the stage of pre-production prototypes. However, surprisingly for them, the Minister of Automobile Industry required them to cease all work on the unfinished project and instead create a front-wheel drive car identical to the French Simca 1307, which was favoured by him. While this decision helped to cut the development costs, it came as an insult to the engineers and designers, who had their own mock-ups of the future car ready.[3]

The engineers modified an existing Moskvitch engine for front-wheel drive and fitted the drivetrain into the Simca. After all tests were successfully completed, it was decided by the Minister to copy the Simca 1307 bodyshell almost entirely, starting from the A-pillar. But, besides the fact that the AZLK designers considered it "insulting and humiliating" to copy an existing car,[4] it came out that the new powertrain and chassis required a different bodyshell, and despite the two cars having similar shapes, the only parts of the French car that were directly copied to the Moskvitch-2141 were some constructive elements of the roof and the form of the window seals. As the car's chief designer Yuri Tkachenko stated in 1992, the differences between the Simca and the M-2141 were so numerous and significant that it was much easier to say what details were borrowed from the Simca rather than what was added to its design.[5] The existing engine was too long for transverse placement, so it was placed longitudinally, like on the Renault 20/30 or Audi 80/100 series. 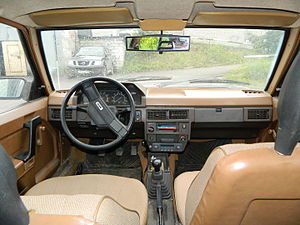 The Aleko turned out to be quite a breakthrough for the Soviet automotive industry of its time. It almost became the first front-wheel drive hatchback of the Soviet Union, but due to the fact that its development took a further two years for Moskvitch to set up the manufacturing, the Lada Samara arrived first. Although the M-2141 had a more comfortable design than the Samara, the dissolution of the Soviet Union followed by an economic crisis, financial mismanagement and disruptions in the work of the company caused a decline in assembling quality in the 1990s and damaged the reputation of this car in the markets. Nonetheless, even then, it was still praised for a high level of passive safety, robustness of construction, good off-road capabilities, and ease of repair.

The Aleko was sold mostly on the domestic market, but in the late 1980s it was exported too. In some export markets, including France and Germany, the cars were advertised as the Lada Aleko, and diesel engines from Ford and Indenor could be delivered in addition to the standard petrol engines. The Aleko was also assembled in Bulgaria under licence for a brief period in the late 1980s. Some of the last Moskvitch models to be built were the upgraded Alekos that were renamed to Svyatogor (models M-214122, M-214100, M-214145) and the M-2142, Dolgorukiy, (1997–2002). They were also based on the design of the M-2141.

Alternative names of the original car and modifications