From Infogalactic: the planetary knowledge core
Jump to: navigation, search
Not to be confused with Soviet cosmonaut Aleksandr Pavlovich Aleksandrov.

Aleksandrov was selected as a Research Cosmonaut on March 1, 1978 as part of the Soviet Union's Intercosmos program. The selection featured six semifinalists, including the parachute jump record holder, Chavdar Djurov, who was killed during the selection process.[3] Aleksandrov was selected as backup to Georgi Ivanov on the Soyuz 33 mission to the Salyut 6 space station. Subsequently, Aleksandrov was assigned to the prime crew of the Soyuz TM-5 mission to the Mir space station.[1][2] 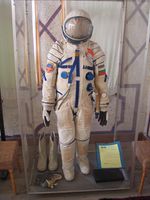 Currently Aleksandrov works as a research scientist. He is married and has one child.[2]