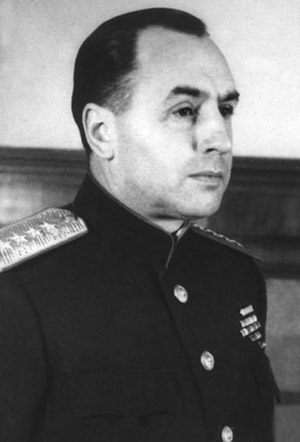 Aleksei Innokentievich Antonov (Russian: Алексе́й Инноке́нтьевич Анто́нов) (9 September 1896 - 16 June 1962) was a General of the Soviet Army, awarded the Order of Victory for his efforts in World War II.

In 1941, Antonov became Chief of Staff for the Soviet Southwestern Front and Southern Front. In December 1942 he became Deputy Chief General Staff of the combined Soviet forces and Head of the Operations Directorate, a pivotal role within the Stavka.[4] His duty was to liaise with other officers and inform Stalin of the military situation. Richard Overy writes of him at this time:

Vasilevsky came to rely on one subordinate above all others: the chief of operations, General Aleksei Antonov. [...] On December 11 [1942] the forty-six-year-old Antonov stepped into the role which was more directly exposed to Stalin's inquisitive leadership than any other. Antonov rose to the challenge. Instead of rushing off to report to Stalin when he arrived in Moscow, he spent the first week familiarizing himself thoroughly with the General Staff and the state of the front. Only when he was fully primed did he go to see his commander. The two men developed the most effective working relationship of the war. Antonov displayed a calm intelligence married to a massive energy and exceptional industry. According to his deputy, General Sergei Shtemenko, Antonov never lost his temper or allowed circumstances to get the better of him. He was firm, caustic, slow to praise and a tough taskmaster, but the rigorous regimen that he imposed on his staff won their respect. Above all he was adept at manipulating Stalin. He did not sugar-coat his reports. He was prepared to stand up to Stalin with what his deputy regarded as a 'brave outspokenness'. So skilled was he at providing the evening situation reports concisely and accurately that even Zhukov bowed to his capability and allowed Antonov to present them in his place. The trust that Stalin came to place in Antonov was reflected in his survivability. He retained his office until February 1945, when he was made chief of staff in Vasilevsky's place.[5]

By 1944 Antonov was Chief Spokesman and was present at both the Yalta and Potsdam Conferences. At the Yalta Conference he briefed the Western Allies on co-ordinating military actions,[6] and by stressing how the Allies could aid Soviets through bombing lines of communications contributed to the Dresden raid.[7]

After the war Antonov became Deputy Commander-in-Chief and then Commander-in-Chief of the Transcaucasus Military District. In 1955, he became Chief of Staff of the Combined Forces of the Warsaw Pact. He held this post until his death in 1962.[8]

In 1956, Antonov married ballerina Olga Vasiliyevna Lepeshinskaya. It was her second marriage.[9]