From Infogalactic: the planetary knowledge core
Jump to: navigation, search
This name uses Eastern Slavic naming customs; the patronymic is Valeryevich and the family name is Serebryakov. 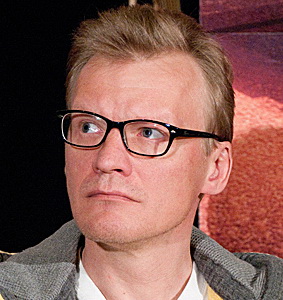 Aleksei Valeryevich Serebryakov, PAR, HOR (Russian: Алексей Валерьевич Серебряков; born 3 June 1964) is a Soviet/Russian/Canadian stage and film actor. He is one of the most popular and highly paid actors in modern Russia who started acting at 13.[1]

Serebryakov worked for many years with country's most famous theatrical companies: Tabakov Theatre (1986—1991) and Lenkom Theatre (2009-2012).

In March 2012, Serebryakov emigrated to Canada with his family, citing corruption and political unrest in Russia as obstacles in the raising of his children.[1][2]