Aleksey Vladimirovich Batalov (Russian: Алексе́й Влади́мирович Бата́лов; born 20 November 1928) is a Soviet and Russian actor who has been acclaimed for his portrayal of noble and positive characters. He was named a People's Artist of the USSR in 1976 and a Hero of Socialist Labour in 1989.

Batalov was born in Vladimir on 20 November 1928 into a family associated with the theatre. His uncle Nikolay Batalov starred in Vsevolod Pudovkin's classic Mother (1926). Anna Akhmatova was a family friend, and he painted a well-known portrait of her in 1952. Batalov joined the Moscow Art Theatre in 1953 but left three years later to concentrate on his career in film. During the Khrushchev Thaw he was one of the most recognizable actors in the Soviet Union. The Cranes Are Flying (1957) is his best regarded film of the period, and the one which won Palme d'Or at the Cannes Film Festival. He also starred in Mikhail Romm's Nine Days of One Year (1962). In 1967 he was a member of the jury of the 5th Moscow International Film Festival.[1] In 1973 he was a member of the jury at the 8th Moscow International Film Festival.[2]

During the 1960s and 1970s, Batalov became known for his fastidious approach towards choosing roles for himself. He appeared mostly in film adaptations of Russian classics, including Anton Chekhov's Lady with a Lapdog (1960) and Bulgakov's Flight (1970). He also directed screen versions of Gogol's The Overcoat (1960) and Yuri Olesha's Three Fat Men (1966). In the 1970s he concentrated on professorship at the Gerasimov Institute of Cinematography.

In 1979 Batalov was invited to play Gosha, a mill machinist, in the melodrama Moscow Does Not Believe in Tears. After many hesitations, Batalov brilliantly played his part in the movie, which won him the USSR State Prize. The role was central to the film's Soviet message. As one character says in the picnic scene: "Seventy percent of my doctorate was due to Gosha's mechanical genius". After that, he effectively retired from acting and devoted his time to coaching new generations of film actors. Boris Yeltsin presented the Lifetime Achievement Nika Award to him in 2002. Batalov was awarded the State Prize of the Russian Federation (2005).

In 2007 he was awarded with a Lifetime Achievement Award at the 29th Moscow International Film Festival.[3]

In March 2014 he signed a letter in support of the position of the President of Russia Vladimir Putin on Russia's military intervention in Ukraine.[4]

Awards of Russia and the USSR 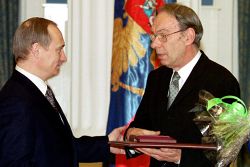 The awards ceremony of the President in the field of literature and art, Vladimir Putin and Aleksey Batalov, 1 March 2000.