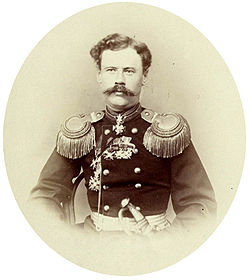 Aleksey Tillo's grandfather was a French Huguenot, but his father was a citizen of Russian Empire. Aleksey graduated from the Mikhailovskaya Artillery Academy (1862) and Department of Geodesy of the General Staff Academy in Saint Petersburg (1866). His greatest achievement was a hypsometric map of the European part of Russia published in 1889. It was the first map of its kind that showed elevation correctly. For creating this map Tillo was elected a corresponding member of the Russian (1892) and Parisian Academies of Sciences. Aleksey Tillo is known to have coined the term Central Russian Upland. Also, he measured the length of the main Russian rivers and conducted work on level difference of Caspian Sea and Sea of Aral. Aleksey Tillo authored a number of works on geomagnetism and meteorology.

The Tillo Islands, a small archipelago in the Kara Sea, as well as an island near Wilczek Land in Franz Josef Land, were named after Aleksey Tillo.