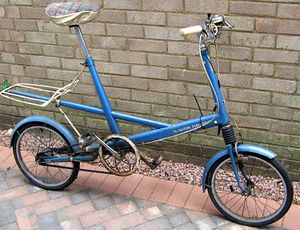 Moulton was educated at Marlborough College and King's College, Cambridge.[6] He was the great-grandson of the rubber pioneer Stephen Moulton, the founder of the family business George Spencer Moulton & Co. Ltd., in which he worked after World War II, specialising in rubber suspension systems for vehicles. His father, John Coney Moulton, was a naturalist working in the Far East.

During the war he had worked on engine design at the Bristol Aeroplane Company.[6] In the late 1950s, after the acquisition of the family business by the Avon Rubber Company, Moulton started up a new company, Moulton Developments Limited, to design the suspension system for British Motor Corporation's new small car, the Mini, that was being designed by his friend Sir Alec Issigonis. The combination of conical rubber springs and small wheels was one of the many innovative developments that allowed Issigonis to achieve the Mini's small overall size. This was later refined into the hydrolastic and hydragas suspension systems used on later British Leyland cars such as the Austin Maxi, Austin Allegro and Rover Metro, and most recently on the MGF.

In 1976, Moulton was awarded the CBE for services to industry. Other honours include: