Alexander Grigori Arutiunian (Armenian: Ալեքսանդր Գրիգորի Հարությունյան), also known as Arutunian, Arutyunyan, Arutjunjan or Harutiunian (23 September 1920 – 28 March 2012), was a Soviet and Armenian composer and pianist, widely known for his 1950 trumpet concerto.[1] A professor at Yerevan State Conservatory, he was recognized with many awards for his work, including the Stalin Prize in 1949 and People's Artist of the USSR in 1970, as well as numerous honors from his homeland of Armenia.[2]

Arutiunian was born in Yerevan, Armenia, in the family of Grigor and Eleonora Arutiunian. His father was a military serviceman. In 1927, Arutiunian became a member of the Yerevan State Conservatory’s children group, then, at age 14, he was admitted to the Conservatory to the studios of Olga Babasyan (piano), and Sergei Barkhudaryan and Vardges Talyan (composition). He graduated from the Music Conservatory of Yerevan on the eve of World War II. After the war he moved to Moscow, where between 1946 and 1948 he participated in the workshops of House of Armenian Culture, studied composition with Genrikh Litinsky. After graduation he returned to Yerevan to teach at the local Conservatory and in 1954 he was appointed artistic director of the Armenian State Philharmony. He was also a member of the Board of the USSR Composers' Union, as well as of the Armenian SSR Composers’ Union.

In 1948, Arutiunian was awarded the Stalin Prize for his cantata Motherland,[3] a graduation piece he wrote as a student at the Moscow Conservatory. The USSR Radio Choir and Orchestra performed this work first time in November 1948. 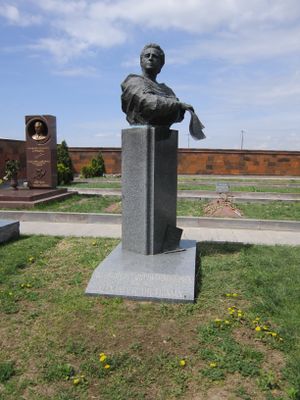 In 1949, Arutiunian composed the "Festive Overture" that was first performed in the Big Hall of the Leningrad Philharmonic in November 1949, with Evgeny Mravinsky conducting. During the Moscow Music Congress Aram Khachaturian considered him as a promising Soviet composer.[4] He has continued to win acclaim at home and abroad for his works, many of which are quickened by the folk traditions of Armenian music. Other works of that kind include The tale of Armenian people (1960), Ode to Lenin (1967) and Hymn to the brotherhood (1970).

Some of Arutiunian's works for wind instruments include his 1950 concerto for trumpet, the concerto for tuba, and the brass quintet Armenian Scenes. In 1988, inspired by the Spitak earthquake, Arutiunian composed his Concerto for Violin and String Orchestra, Armenia-88[3] (dedicated to Ruben Aharonyan). The premiere took place in Yerevan in 1989.

In September 2010 Arutiunian's 90th birthday was celebrated by a series of concerts.

The melodic and rhythmic characteristics of Armenian folk music are a strong influence in Arutiunian’s work. As a composer, he expresses his nationality by incorporating the flavor of ashughner (folk minstrel) improvisations. At the time the concerto was written, his compositional style was similar to Khachaturian's. However, in the 1960s he tended towards classical forms and clearer tonality.

Arutiunian’s trumpet concerto was his sixth major composition, written in 1950. Arutiunian originally intended to write it in 1943 for a student of Tabakov, Zsolak Vartasarian, who was the principal trumpet in the Armenian Philharmonic Orchestra. However, Vartasarian died in the war and the concerto was not completed until 1950, so Aykaz Messlayan was the first performer of the Concerto and Timofei Dokschitzer was the first recording artist of this concerto.

The concerto's introduction to the United States is solely due to Dokschitzer, a leading Soviet Russian trumpeter.

In 1950, Arutiunian married Irina (Tamara) Odenova. Their marriage produced two children, a daughter, Narine (born 1951), who is a pianist and lawyer; and a son, Suren (born 1953), who is an artist-designer. His extended family includes 3 granddaughters and a grandson. He died, aged 91, in his home city of Yerevan. Arutiunian is buried at the Komitas Pantheon which is located in the city center of Yerevan.