Beer was born in Hammerstein (Czarne), West Prussia. He studied in Berlin and Darmstadt. His first employment was in Mainz, where he restored and refurbished government buildings for the state of Hesse. Being a Jew, he could not find promotion in this position and finally left his post to take on that of a Regierungsbaumeister (Architect in Chief), offered by the Jewish Community in Berlin. Among his works created during this employment are: 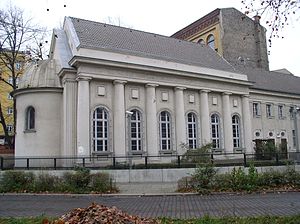 An orthodox synagogue by Alexander Beer.

Other, lesser commissions included the reconstruction, refurbishment and maintenance of various buildings owned by the Berlin Jewish Community.

All of Beer's works were seriously damaged during the era of Nazi Germany. The most dramatic vandalism was the torching of the Prinzregentenstrasse synagogue, Berlin-Wilmersdorf, on the Kristallnacht of 9–10 November 1938. Since 2000, some of the buildings have been restored, mostly with private funding.

Beer married Alice Fanny Davidsohn on 8 August 1924. She died of cancer on 5 November 1941. On 17 March 1943, Beer was deported to Theresienstadt concentration camp, where he died. His daughter, Beate (born 9 May 1929) survived and now lives in Sydney, Australia.