Blok was born in Saint Petersburg, into a sophisticated and intellectual family. Some of his relatives were literary men, his father being a law professor in Warsaw, and his maternal grandfather the rector of Saint Petersburg State University. After his parents' separation, Blok lived with aristocratic relatives at the manor Shakhmatovo near Moscow, where he discovered the philosophy of Vladimir Solovyov, and the verse of then-obscure 19th-century poets, Fyodor Tyutchev and Afanasy Fet. These influences would affect his early publications, later collected in the book Ante Lucem.

In 1903 he married Lyubov (Lyuba) Dmitrievna Mendeleeva, daughter of the renowned chemist Dmitri Mendeleev. Later, she would involve him in a complicated love-hate relationship with his fellow Symbolist Andrei Bely. To Lyuba he dedicated a cycle of poetry that made him famous, Stikhi o prekrasnoi Dame (Verses About the Beautiful Lady, 1904).

The wind is weaving
The white snow.
Brother ice peeps from below
Stumbling and tumbling
Folk slip and fall.
God pity all!

Night, street and streetlight, drug store,
The purposeless, half-dim, drab light.
For all the use live on a quarter century –
Nothing will change. There's no way out.

You'll die – and start all over, live twice,
Everything repeats itself, just as it was:
Night, the canal's rippled icy surface,
The drug store, the street, and streetlight.

Some night and street, some chemist's lantern
Is bringing senseless weary light.
Well, nothing changes, that's one pattern,
Live extra twenty-five and find.

You die to start a life all over,
All things repeat as did before.
That night, cold waters at quay border,
That light, that street, that chemist's store.

“
”
"The night, the street, the lantern, the drugstore..." (1912) Translated by Alexei Parphyonov
File:BlokLeiden2.JPG
Blok's poem as wall poem in Leiden

During the last period of his life, Blok emphasised political themes, pondering the messianic destiny of his country (Vozmezdie, 1910–21; Rodina, 1907–16; Skify, 1918). Influenced by Solovyov's doctrines, he had vague apocalyptic apprehensions and often vacillated between hope and despair. "I feel that a great event was coming, but what it was exactly was not revealed to me", he wrote in his diary during the summer of 1917. Quite unexpectedly for most of his admirers, he accepted the October Revolution as the final resolution of these apocalyptic yearnings.

In May 1917 Blok was appointed as a stenograph for the Extraordinary Commission to investigate illegal actions ex officio Ministers[2] or to transcribe the (Thirteenth Section's) interrogations of those who knew Grigori Rasputin.[3] According to Orlando Figes he was only present at the interrogation.[4]

By 1921 Blok had become disillusioned with the Russian Revolution. He did not write any poetry for three years. Blok complained to Maksim Gorky that his "faith in the wisdom of humanity" had ended. He explained to his friend Korney Chukovsky why he could not write poetry any more: "All sounds have stopped. Can't you hear that there are no longer any sounds?"[5] Within a few days Blok became sick. His doctors requested that he be sent for medical treatment abroad, but he was not allowed to leave the country. Gorky pleaded for a visa. On 29 May 1921, he wrote to Anatoly Lunacharsky: "Blok is Russia's finest poet. If you forbid him to go abroad, and he dies, you and your comrades will be guilty of his death". Permission was granted only on 10 August, after Blok had already died.[5]

Several months earlier, Blok had delivered a celebrated lecture on Alexander Pushkin, the memory of whom he believed to be capable of uniting White and Soviet Russian factions.[5] 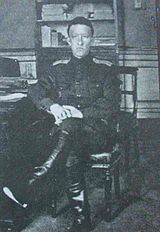 The idealized mystical images presented in his first book helped establish Blok as a major poet of the Russian Symbolism style. Blok's early verse is musical, but he later sought to introduce daring rhythmic patterns and uneven beats into his poetry. Poetical inspiration was natural for him, often producing unforgettable, otherworldly images out of the most banal surroundings and trivial events (Fabrika, 1903). Consequently, his mature poems are often based on the conflict between the Platonic theory of ideal beauty and the disappointing reality of foul industrialism (Little Mess, 1906).

The description of St Petersburg he crafted for his next collection of poems, The City (1904–08), was both impressionistic and eerie. Subsequent collections, Faina and the Mask of Snow, helped augment Blok's reputation. He was often compared with Alexander Pushkin, and is considered perhaps the most important poet of the Silver Age of Russian Poetry. During the 1910s, Blok was admired greatly by literary colleagues, and his influence on younger poets was virtually unsurpassed. Anna Akhmatova, Marina Tsvetaeva, Boris Pasternak, and Vladimir Nabokov wrote important verse tributes to Blok.

Blok expressed his opinions about the revolution by the enigmatic poem "The Twelve" (1918). The long poem exhibits "mood-creating sounds, polyphonic rhythms, and harsh, slangy language" (as the Encyclopædia Britannica termed it). It describes the march of twelve Bolshevik soldiers (likened to the Twelve Apostles of Christ) through the streets of revolutionary Petrograd, with a fierce winter blizzard raging around them. "The Twelve" alienated Blok from many of his intellectual readers (who accused him of lack of artistry), while the Bolsheviks scorned his former mysticism and asceticism. Blok considered this poem to be his best work.[6] Searching for modern language and new images, Blok used unusual sources for the poetry of Symbolism: urban folklore, ballads (songs of a sentimental nature) and ditties ("chastushka"). He was inspired by the popular chansonnier Mikhail Savoyarov, whose concerts during the years 1915–1920 were visited often by Blok.[7] Academician Viktor Shklovsky noted, that the poem is written in criminal language and in ironic style, similar to Savoyarov’s couplets, by which Blok imitated the slang of 1918 Petrograd.[8]

Blok considered his poetical output as composed of three volumes. The first volume is composed of his early poems about the Fair Lady. The second volume comments upon the impossibility of attaining the ideal for which he craved. The third volume, featuring his poems from pre-revolutionary years, is more lively. For Blok's poetry, colours are essential. Blue or violet is the colour of frustration, when the poet understands that his hope to see the Lady is delusive. The yellow colour of street lanterns, windows and sunsets is the colour of treason and triviality. Black hints at something terrible, dangerous but potentially capable of esoteric revelation. Russian words for yellow and black are spelled by the poet with a long O instead of YO, in order to underline "a hole inside the word".

Imitating Fyodor Tyutchev, Blok developed a complicated system of poetic symbols. In his early work, for instance, wind represents the Fair Lady's approach, whereas morning or spring is the time when their meeting is most likely to happen. Winter and night are the evil times when the poet and his lady are far away from each other. Bog and mire represent everyday life with no spiritual light from above. 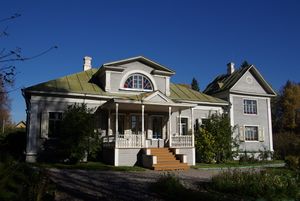