listen), August 23, 1880 – July 8, 1932) was a Russian writer, notable for his romantic novels and short stories, mostly set in an unnamed fantasy land with a European or Latin American flavor (Grin's fans often refer to this land as Grinlandia). Most of his writings deal with sea, adventures, and love.[1]

Aleksandr Grin was born Aleksandr Stepanovich Grinevsky (Russian: Александр Степанович Гриневский) in a suburb of Vyatka in 1880, the son of the Pole Stefan Hryniewski, deported after the January Uprising of 1863, and a Russian nurse Anna Lyapkova.[2] In 1896, after graduating from a school in Vyatka, Grinevsky went to Odessa and lived the life of a vagabond.[1] He worked as a sailor, gold miner, construction worker, but often found himself without a job and sustained himself by begging and thanks to money sent to him by his father.

After joining the Russian army, he became a member of the Socialist-Revolutionary Party, was arrested, and spent time in jail for "revolutionary propaganda". His first short story was published in a newspaper in 1906. In the same year he was arrested in Saint Petersburg and sentenced to four years of exile in a remote area of Tobolsk Governorate. However, very soon after arriving to Tobolsk, Grin escaped and returned to Petersburg to live illegally. He was again arrested in 1910 and sent to live in Arkhangelsk Governorate. In a small village called Kegostrov,[3] Grin and his first wife Vera Pavlovna Abramova (whom he married in 1910) lived from 1910 to 1912.

In 1912, he returned to Saint Petersburg and divorced his wife. At that time, Grin published mostly short stories; most of his larger works were written after the October revolution and enjoyed significant popularity in the first half of the 1920s. In 1921, he married ru.[4] In 1924, they moved to Feodosiya to live near the sea. In his late days, Grin's romantic visions were in stark conflict with the mainstream Soviet literature; publishers in Moscow and Leningrad refused to consider his romantic writings, and Grin and his wife lived in extreme poverty. Grin suffered from alcoholism and tuberculosis which eventually ruined his health. He died of stomach cancer in 1932 in Stary Krym.[5] 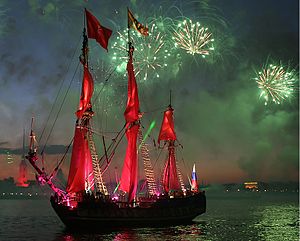 Most of Alexander Grin's writings bear no direct relation to the reality of Imperial and Soviet Russia that he lived in. The setting of most of his novels and short stories is an unnamed land by the sea, apparently far from Europe but with all characters being Western European in name and appearance. Even his literary pseudonym (Grin) is a de-Russified form of his real last name (Grinevsky).

Described by some critics as "adolescent fiction",[citation needed] Grin's works in fact have a universal appeal. Like the authors of fantasy of the second half of 20th century, Grin deals with human desires and emotions in their most pure form. His world is not a fairy tale; it has many things in common with the reality of the early 20th century (such as automobiles and banks), but it's always more romantic and "childish" in its general feel. Populated by sea captains, sailors, scientists, travelers, criminals, extravagant aristocrats, childlike girls, elegant villains, and strong-spirited heroes who always stay true to their dreams, Grin's world (often referred to as Grinlandia by Grin's fans) is one of the most attractive and "livable" fantasy worlds in literature. Some of his novels contain an element of magic - not as an established part of his world, but always as a miracle that changes the lives of those who encounter it.

The most notable of his novels include: