Alexander James Dallas (June 21, 1759 – January 16, 1817) was an American statesman who served as the U.S. Treasury Secretary under President James Madison.

Dallas was born in Kingston, Jamaica, to Dr. Robert Charles Dallas and Sarah Elizabeth (Cormack) Hewitt. When he was five his family moved to Edinburgh and then to London. There he studied under James Elphinston. He planned to study law, but was unable to afford it. He married Arabella Maria Smith of Pennsylvania, the daughter of Maj. George Smith of the British Army and Arabella Barlow (in turn the daughter of the Rev. William Barlow and Arabella Trevanion, the daughter of Sir Nicholas Trevanion), in 1780 and the next year they moved to Jamaica. There he was admitted to the bar through his father's connections. Maria's health suffered in Jamaica and they moved to Philadelphia in 1783. He was admitted to the Pennsylvania bar in 1785. His law practice was slow and on the side he edited the Pennsylvania Herald from 1787 to 1788 and the Columbian Magazine from 1787 to 1789.

When the United States Supreme Court came to Philadelphia in 1791, he would become their first reporter of decisions starting with West v. Barnes (1791). Because the post of reporter was an unofficial one, Dallas did his work from his own funds. The volumes, of which he produced only four, were faulted for being incomplete, inaccurate, and extremely tardy. For example, the landmark ruling in Chisholm v. Georgia (1793) which prompted the Eleventh Amendment, was not reported by Dallas until five years later, well after the Amendment had been ratified. When he abandoned reporting of decisions when the Court moved to the new capital, Washington, D.C., he declared "I have found such miserable encouragement for my reports that I have determined to call them all in, and devote them to the rats in the State-House." He was a founder of the Democratic-Republican Societies in 1793.

Secretary of the Commonwealth

Governor Thomas Mifflin named Dallas Secretary of the Commonwealth, a post he held from 1791 to 1801. Because Mifflin was an alcoholic, Dallas functioned as de facto governor for much of the late 1790s. Dallas helped found the Democratic-Republican party in Pennsylvania and advocated a strict construction of the new Constitution.

US Attorney and Secretary of Treasury 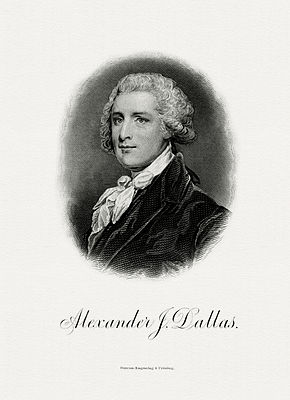 File:DALLAS, Alexander J-Treasury (BEP engraved portrait).jpg
Bureau of Engraving and Printing portrait of Dallas as Secretary of the Treasury.

In 1801, he was named United States Attorney for the Eastern District of Pennsylvania and served until 1814. When his friend Albert Gallatin was treasury secretary when the War of 1812 began, he helped Gallatin obtain funds to fight Britain. The war nearly bankrupted the Federal Government by the time Dallas replaced Gallatin as treasury secretary. Dallas reorganized the Treasury Department, brought the government budget back into surplus, championed the creation of the Second Bank of the United States, and put the nation back on the specie system.

He was a member of the American Philosophical Society from 1791 and a trustee of the University of Pennsylvania.

Dallas County, Alabama and Dallas Township, Pennsylvania are named for him. Six U.S. Coast Guard Cutters have been named DALLAS, the most recent was USCGC DALLAS (WHEC-716). Fort Dallas in Florida and the U.S. Navy ship USS Dallas (DD-199) were named after his son, Alexander J. Dallas, who died during his Navy service.

His other son George Mifflin Dallas was Vice President under James K. Polk and one possible namesake for Dallas, Texas; his father and brother are other possible namesakes of the Texas city.

His daughter, Sophia Burrell Dallas, married on April 4, 1805 Richard Bache, Jr., the son of Richard Bache, Sr. a marine insurance underwriter and importer in Philadelphia and served as United States Postmaster General from 1776 to 1782. His mother was Sarah Franklin Bache (September 11, 1743 – October 5, 1808) was the daughter of Benjamin Franklin, one of the Founding Fathers of the United States of America and Deborah Read.