Alexander Leonovich Kemurdzhian (Armenian: Ալեքսանդր Լևոնի Քեմուրջյան, Russian: Алекса́ндр Лео́нович Кемурджиа́н; 4 October 1921, Vladikavkaz - 25 February 2003, St Petersburg)[1][2][2] was a pioneering scientist, of Armenian heritage, in the space flight program of the Soviet Union. As chief engineer-designer at the VNIITransMash, he designed the first rovers to explore another world - the Soviet Lunokhod rovers - making him the founder of the space transport machine-engineering science. 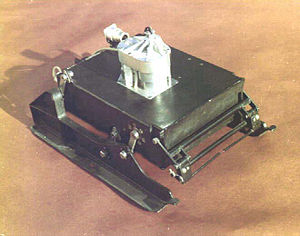 Kemurdzhian was born in 1921 in Vladikavkaz. He started studying in Bauman Moscow Higher Technical School (MHTS) in 1940. In 1942 he volunteered for the field army, and served from 1943 and until the end of World War II. Passed with fights a way from the Battle of Kursk to Pomerania.

After the war, Kemurdzhian returned to Bauman MHTS, graduating with honors from the transport faculty in 1951. He was directed on work to Leningrad in VNII-100 (Nowadays: VNIITransMash - All-Russian Scientific-Research Institute of the Transport Machine-Engineering). In 1959, Kemurdzhian became the chief of department of the new movement principles. He was engaged in creation of hovercraft "Object-760", which received the name of "polzolyot" (Russian: "ползолет", that is ползти - to crawl, летать - to fly). He became the chief engineer-designer in 1969 - the deputy director of VNIItransmash. In 1991 he became their chief researcher.[3]

In 1963-1973 A.L.Kemurdzhian headed works on the design and creation of the self-propelled automatic chassis of Soviet Moon rovers [4] and Mars rovers.[5] Under his leadership planetary rovers developed as robotic transport vehicles of space appropriation, and his group developed the first-ever planet research vehicles - «Lunokhods», Prop-M Rover (Apparatus of the Cross-Country Capability Estimate), apparatus for the jump movement at the moon of Mars – Phobos.[6] Devices designed under his leadership also yielded data on physicomechanical properties of soil of the Moon and Venus.

After the Chernobyl disaster, Kemurdzhian was tapped by Soviet officials as a special adviser on the development and use of remote-controlled vehicles working in unsafe areas.

Before his death, Kemurdzhian traveled to the United States to visit with engineers from NASA's Jet Propulsion Lab and compare ideas on unmanned planetary rovers.

The Lunokhod programme, and specifically Kemurdzhian's work on it, was the subject of the documentary film "Tank on the Moon"[7] by French film maker Jean Afanassieff. The documentary premiered in the United States on the Science Channel on February 12, 2008.

"Everyone is capable of doing extraordinary things, each in his own way. Some are perfectly happy doing simple things in good spirits; others, however, concentrate on details. We are all different, and it really doesn’t matter if you focus on space travel or work in the fields. What is important is to do what you really want."