From Infogalactic: the planetary knowledge core
Jump to: navigation, search
This article is about the Russian politician. For the fictional character, see List of BattleTech characters § Aleksandr Kerensky.

Alexander Fyodorovich Kerensky (Russian: Алекса́ндр Фёдорович Ке́ренский, IPA: [ɐlʲɪˈksandr ˈkʲerʲɪnskʲɪj]; 2 May 1881 – 11 June 1970) was a Russian lawyer and politician, who served as the second Minister-Chairman of the Russian Provisional Government in July–November 1917. A leader of the moderate-socialist Trudoviks faction of the Socialist Revolutionary Party, Kerensky is a key figure of the Russian Revolution.

After the February Revolution that deposed Tsar Nicholas II, Kerensky served as Minister of Justice in Georgy Lvov's post-imperial and democratic Provisional Government. In May he became Minister of War. In July he succeeded Lvov as Minister-Chairman. On 7 November, his government was overthrown by the Vladimir Lenin-led Bolsheviks in the October Revolution. He spent the remainder of his life in exile, dying in New York City at the age of 89.

Alexander Kerensky was born in Simbirsk (now Ulyanovsk) on the Volga River on 2 May 1881.[1] His father, Fyodor Kerensky, was a teacher,[1] and director of the local gymnasium. His mother, Nadezhda (née Adler), was born to a Russian German,[2] Alexander Adler, who was head of the Topographical Bureau of the Kazan Military District, and Nadezhda (née Kalmykova), a daughter of a former serf who had bought his freedom before serfdom was abolished in 1861, allowing him to become a wealthy Moscow merchant.[3][4] Later rumours emerged about Alexander Kerensky having Jewish roots, but these seem to be untrue.[5]

Kerensky's father was the teacher of Vladimir Ulyanov (Lenin); members of the Kerensky and Ulyanov families were friends. In 1889, when Kerensky was eight, the family moved to Tashkent, where his father had been appointed the main inspector of public schools (superintendent). Alexander graduated with honours in 1899. The same year he entered St. Petersburg University, where he studied history and philology. The next year he switched to law and received a degree in 1904. In the same year he married Olga Lvovna Baranovskaya, the daughter of a Russian general.[6] Kerensky joined the Narodnik movement and worked as a legal counsel to victims of Revolution of 1905. At the end of year he was jailed on suspicion of belonging to a militant group. Afterwards he gained a reputation for his work as a defence lawyer in a number of political trials of revolutionaries.[7]

In 1912 Kerensky became widely known when he visited the goldfields at the Lena River and published material about the Lena Minefields incident.[8] In the same year Kerensky was elected to the Fourth Duma as a member of the Trudoviks, a moderate, non-Marxist labour party who were associated with the Socialist-Revolutionary Party and joined a freemason society uniting the anti-monarchy forces that strived for the democratic renewal of Russia.[9][10][11] He was a brilliant orator and skilled parliamentary leader of the socialist opposition to the government of Tsar Nicholas II.

On 2 November 1916, at the opening of the Duma, Kerensky called the ministers "hired assassins" and "cowards" and said they were "guided by the contemptible Grishka Rasputin!"[12] Grand Duke Nikolai Mikhailovich, Prince Lvov and general Mikhail Alekseyev attempted to persuade Nicholas to send the Empress away either to the Livadia Palace in Yalta or to England.[13] Mikhail Rodzianko, Zinaida Yusupova, Alexandra's sister Elisabeth, Grand Duchess Victoria and the Tsar's mother also tried to influence the Emperor or his stubborn wife[14] to remove Grigori Rasputin, but without success.[15] According to Kerensky, Rasputin had terrorised the Tsarina by threatening to return to his native village.[16] People around Rasputin (his secretaries) were interested in strategic information.[17]

After Rasputin had been murdered and buried in Tsarskoye Selo a group of soldiers were ordered by Kerensky to rebury the corpse at an unmarked spot in the countryside. But the truck broke down or was forced to stop because of the snow on Lesnoe Road. 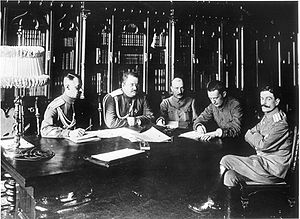 Kerensky as Minister of War

When the February Revolution broke out in 1917, Kerensky was one of its most prominent leaders: he was a member of the Provisional Committee of the State Duma and was elected vice-chairman of the Petrograd Soviet, and simultaneously became the first Minister of Justice in the newly formed Provisional Government. When the Soviet passed a resolution prohibiting its leaders from joining the government, Kerensky delivered a stirring speech at a Soviet meeting. Although the decision was never formalised, he was granted a de facto exemption and continued acting in both capacities.

After the first government crisis over Pavel Milyukov's secret note re-committing Russia to its original war aims on 2–4 May, Kerensky became the Minister of War and the dominant figure in the newly formed socialist-liberal coalition government. On 10 May (Julian calendar), Kerensky started for the front, and visited one division after another, urging the men to do their duty. His speeches were impressive and convincing for the moment, but had little lasting effect. Under Allied pressure to continue the war, he launched what became known as the Kerensky Offensive against the Austro-Hungarian/German South Army on 17 June (Julian calendar). At first successful, the offensive was soon stopped and then thrown back by a strong counter-attack. The Russian army suffered heavy losses and it was clear from the many incidents of desertion, sabotage, and mutiny that the army was no longer willing to attack. 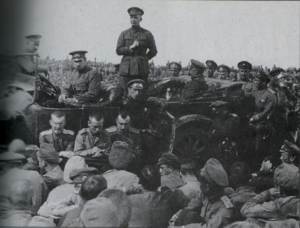 Kerensky was heavily criticised by the military for his liberal policies, which included stripping officers of their mandates (handing over-riding control to revolutionary inclined "soldier committees" instead), the abolition of the death penalty, and allowing various revolutionary agitators to be present at the front. Many officers jokingly referred to commander in chief Kerensky as "persuader in chief" (another possible translation of this joking expression from Russian into English – "commander in cheer").

On 2 July 1917, the first coalition collapsed over the question of Ukraine's autonomy. Following July Days unrest in Petrograd and suppression of the Bolsheviks, Kerensky succeeded Prince Lvov as Russia's Prime Minister. Following the Kornilov Affair at the end of August and the resignation of the other ministers, he appointed himself Supreme Commander-in-Chief as well.

Kerensky's next move, on 15 September, was to proclaim Russia a republic, which was contrary to the non-socialists' understanding that the Provisional Government should hold power only until the Constituent Assembly should meet to decide Russia's form of rule, but which was in line with the long proclaimed aim of the Socialist Revolutionary Party.[18] He formed a five-member Directory, which consisted of himself, minister of foreign affairs Mikhail Tereshchenko, minister of war General Verkhovsky, minister of the navy Admiral Dmitry Verderevsky and minister of post and telegraph Nikitin. He retained his post in the final coalition government in October 1917 until it was overthrown by the Bolsheviks. 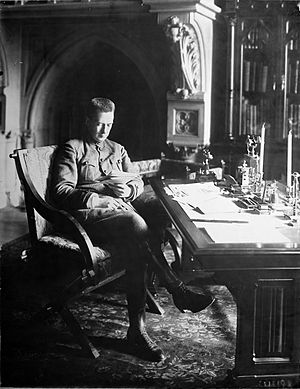 Kerensky's major challenge was that Russia was exhausted after three years of war, while the provisional government offered little motivation for a victory outside of continuing Russia's obligations towards its allies. Russia's continued involvement in the world war was not popular among the lower and middle classes and especially the soldiers. They had all believed that Russia would stop fighting when the Provisional Government took power, and now they felt deceived. Furthermore, Vladimir Lenin and his Bolshevik party were promising "peace, land, and bread" under a communist system. The army was disintegrating owing to a lack of discipline, leading to desertion in large numbers. By autumn 1917, an estimated two million men had unofficially left the army.

Kerensky and the other political leaders continued their obligation to Russia's allies by continuing involvement in World War I, fearing that the economy, already under huge stress from the war effort, might become increasingly unstable if vital supplies from France and the United Kingdom were cut off. The dilemma of whether to withdraw was a great one, and Kerensky's inconsistent and impractical policies further destabilised the army and the country at large.

Furthermore, Kerensky adopted a policy that isolated the right-wing conservatives, both democratic and monarchist-oriented. His philosophy of "no enemies to the left" greatly empowered the Bolsheviks and gave them a free hand, allowing them to take over the military arm or "voyenka" of the Petrograd and Moscow Soviets. His arrest of Kornilov and other officers left him without strong allies against the Bolsheviks, who ended up being Kerensky's strongest and most determined adversaries, as opposed to the right wing, which evolved into the White movement.

During the Kornilov Affair, Kerensky had distributed arms to the Petrograd workers, and by November most of these armed workers had gone over to the Bolsheviks. On 6–7 November [O.S. 25–26 October] 1917 the Bolsheviks launched the second Russian revolution of the year. Kerensky's government in Petrograd had almost no support in the city. Only one small force, a 137 soldier strong subdivision of 2nd company of the First Petrograd Women's Battalion, also known as The Women's Death Battalion, was willing to fight for the government against the Bolsheviks, as the battalion commander ordered the majority of the troops back to their encampment, but this force was overwhelmed by the numerically superior pro-Bolshevik forces and defeated and captured.[19] It took less than 20 hours before the Bolsheviks had taken over the government.

Kerensky escaped the Bolsheviks and went to Pskov, where he rallied some loyal troops for an attempt to retake the city. His troops managed to capture Tsarskoe Selo, but were beaten the next day at Pulkovo. Kerensky narrowly escaped, and spent the next few weeks in hiding before fleeing the country, eventually arriving in France. During the Russian Civil War he supported neither side, as he opposed both the Bolshevik regime and the White Movement.

Kerensky lived in Paris until 1940, engaged in the endless splits and quarrels of the exiled Russian politicians. In 1939, Kerensky married the former Australian journalist Lydia "Nell" Tritton.[20] When Germany invaded France in 1940, they emigrated to the United States. Tritton and Kerensky married at Martins Creek, Pennsylvania.

When his wife became terminally ill in 1945, he travelled with her to Brisbane, Australia, and lived there with her family. She suffered a stroke in February, and he remained there until her death on 10 April 1946. Kerensky returned to the United States, where he spent the rest of his life.

After the German-led invasion of the Soviet Union in 1941, Kerensky offered his support to Joseph Stalin.[21] 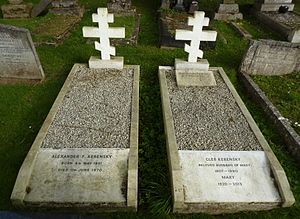 The graves of Alexander Kerensky and of his son and wife at Putney Vale Cemetery, London in 2014

Kerensky eventually settled in New York City, but spent much of his time at the Hoover Institution at Stanford University in California, where he both used and contributed to the Institution's huge archive on Russian history, and where he taught graduate courses. He wrote and broadcast extensively on Russian politics and history. His last public speech was delivered at Kalamazoo College, in Kalamazoo, Michigan.

Kerensky died at his home in New York City in 1970, one of the last surviving major participants in the turbulent events of 1917. The local Russian Orthodox Churches in New York refused to grant Kerensky burial, because of his Freemasonry and because it saw him as largely responsible for Russia falling to the Bolsheviks. A Serbian Orthodox Church also refused burial. Kerensky's body was flown to London where he was buried at Putney Vale's non-denominational cemetery.[22]

Kerensky was married to Olga Lvovna Baranovskaya and they had two sons, Oleg and Gleb, who both went on to become engineers. Kerensky and Olga were divorced in 1939 and soon after he married Lydia Ellen (Nelle) Tritton (1899–1946).